As I feared, time is running away from me. I somehow squeezed 10 hours of work, two hours of CLE, and two hours of errands into the waning daylight hours, and now I'll be attempting to cram two hours of blogging into a fifteen-minute post. Apologies to my remaining nominees for the 2006 College Football Blogger Awards as they each deserve better than they get below.

Please note that nominating blogs is open to everyone. To nominate blogs for any of the categories, simply go to the Nomination Gizmo and nominate blogs of your choice. Prepare for massive link dump!

FOR: The prettiest blog, the best layout and design. CRITERIA: An aesthetic appeal, whether from a stylish banner, a pleasing layout, or an eye-catching incorporation of blog technology.

Bevo Sports. Content area is the world's longest football field! Scroll to the bottom to see the other end zone. Nice, clean boxes and color scheme.

TrojanWire. I'm a sucker for teh Flash. I really like the News by Player swf, and I'll be stealing something like it shortly!

The New Blog on the Block Award

FOR: The best new college football blog. CRITERIA: Must have launched sometime after last year's national championship game. Transitioning to a new blog or affiliating with a network mid-stream doesn't count.

Corn from a Jar. CFAJ launched in July with 5 Signs the Vols are Making Me Prematurely Old, and I was hooked. I was skeptical that he could maintain the quality and humor of that initial series throughout the season, but he did, in fact, get even better. Although I did get the last word on our haiku smackdown, CFAJ dominated the various Rocky Top Talk Hail Mary Haiku contests this season.

FOR: The blog best keeping tabs on the man and calling out all of the injustices in the college football world. CRITERIA: Consistently ahead-of-the-curve on controversial issues in college football.

The Wizard of Odds. Ho-ee-ho, wee-oo-um. If before next season we're able to say that the wicked old witch (Rule 3-2-5-e) is dead, we'll have the Wiz to thank.

FOR: The blog with the best community interaction. CRITERIA: A regular solicitation of input from readers and utilization of reader-produced content.

Burnt Orange Nation. Peter is a blogger's blogger. He really deserves more accolades than I am going to be able to give him here and now, but let me just add an amen to Kyle's praise:

Accordingly, I simply will say this: Peter is a leader in the blogosphere, not just through the example of his weblog (although his influence there is profound), but in the manner that he conducts himself behind the scenes. He is both genuine and gentlemanly, offering aid, advice, and encouragement to all who take up this endeavor and seek his counsel.

In that respect, he is apt to be remembered as the Bear Bryant of the blogosphere, whose impact set off ripples that long will radiate as those who learned from him continue to carry that knowledge outward and upward. Coach Bryant's coaching staffs produced a myriad of future head coaches and those who have profited from Peter's example likewise have gone on to attain some success as webloggers that is due in large measure to his guidance. I know that to be true because you are reading one such weblog right now.

I am not nominating a Man of the Year here, though, so I should get back to the business at hand. Burnt Orange Nation, which epitomizes what it means for a weblog to be fan-friendly, is the handiwork of co-authors who bring their personalities to bear on a variety of questions, from the whimsical to the profound, while relying heavily on the quantitative without ever forgetting the importance of the qualitative to any analysis involving a game of emotion. B.O.N. generally, and Peter particularly, succeeds at being inventive without sacrificing tradition and the site is unstinting in its devotion to its team without ever being guilty of viewing its athletics program through Rose Bowl-tinted glasses. Burnt Orange Nation is the model many of us strive to follow.

The Tyrone Prothro And His Amazing Catch Award

FOR: The best contribution to the lingo of our little interniche, be it a nickname, neologism, or catchy phrase used with frequency. CRITERIA: Spread is important. The ideal candidate has been universally adopted by anyone with cause to use the term.

Charts? Charts. Or any one word question followed by the same one word answer, by MGoBlog.

FOR: The best recurring feature of the year. CRITERIA: The feature should be posted weekly and be generally good and stuff.

Lots to choose from here. There's the BlogPoll, of course, as well as many other regular features on MGoBlog. And there's Burnt Orange Nation's Under the Hood. Shoot, every blogger has some sort of regular feature. Perhaps I'm biased, but my favorite is Corn from a Jar's Three Thoughts and a Cloud of Dust.

The That's Not Really Real Award

FOR: The best photoshop or other counterfeit gag of the year. CRITERIA: Could be a photoshop, a Motivational Poster, an On Notice Board, or something similar, as long as it elicited more than a mere smile.

TigerSmack's Les Miles' Hat Monday is always fun. (He's doing some maintenance, so I can't get a link right now.) One of my favorites, though, is the Jimmy Clausen motivational poster from Hey Jenny Slater. 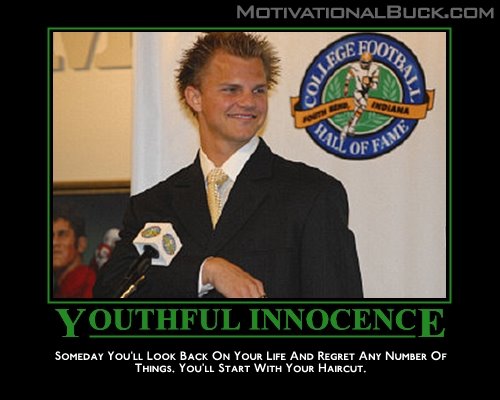 The You Talkin' To Me Award

FOR: The best back and forth between rival blogs the week before a rivalry game. CRITERIA: Must be bi-directional, and both blogs must score points against each other. A unilateral beat-down will not suffice. Should be more in the spirit of fun than wildly abusive.

The pre-Alabama-Florida game dialogue between Every Day Should Be Saturday and Rammer Jammer Yellow Hammer was . . . delightful.

The I'm Just Like You But I Have a Podcast Award

FOR: The best podcast or podcaster of the year. CRITERIA: Uh, must be audio. And about college football, you know. Note that this is "podcast" in a really broad sense. Parody songs, incoherent ravings about Tyrone Willingham, and whatever else you've got are nominate-able. One restriction: it has to be self-generated.

There were several bloggers that sort of dabbled in this area, but only a few that did it more than a couple of times. Rusty at the Georgia Podcast Network had a couple of pretty good SEC previews, one for the East and one for the West, and Brian at The House that Rock Built did a weekly Friday Night Lites that held on for a few weeks. In the "other audio" vein, one simply cannot neglect Verno's Blog's The Orgeron Song or the The House that Rock Built's posting of the absolute meltdown (help! profanity actually in the link!) of a radio talk show host after Michigan State's debacle against Notre Dame. Okay, so it wasn't self-generated, but Brian had the foresight to capture and post it.

...it's just like that other BCS except completely different. We'll be handing out Best Blog awards for each of the BCS conferences, plus one for mid-major coverage (including all independents other than Notre Dame), and one for more general, national coverage blogs. After long debate we decided to put Notre Dame blogs in with the Big East, as the "non-BCS" category is supposed to be an award for mid-majors, which Notre Dame is certainly not. Since ND shares bowl affiliations with the Big East and plays the rest of their sports there, it seemed the logical choice.

Big 10: MGoBlog, of course, but for a bit of diversity, I'm also going to nominate Black Shoe Diaries, who to be honest, I didn't realize was so good until the Vols got matched up Penn State for this year's Outback Bowl.

Big East and ND: Hmm, lots to choose from here. I'll spread the love and go with Card Chronicle, Pitt Blather, Orange 44, and The Mountainlair. Won't tell you which I'm voting for, though.

Pac-10: Just to tick both of them off, I'm going with Bruins Nation and Conquest Chronicles.

SEC: Every Day Should Be Saturday. This conference is loaded with great blogs, largely due to Georgia's representation, so you've gotta give a nod to at least one of them, too, and I'm tipping my hat to Dawg Sports.

Generalists: Sunday Morning Quarterback. And College Football Resource, who has the blogroll to end all blogrolls.

The I Wanna Talk About Me Free for All

The I Wanna Talk About Me Free for All is designed primarily to spread the love in case it doesn't naturally happen some other way and to serve as the season's Round Up of Round Ups. Each blogger, no matter who they are, must identify their three best posts of the year. I'll round `em up, and compile the entire thing. If it kills me. And it might.

Catastrophic Change and The Season of Which We Do Not Speak.

Tie: CBS' Tim Brando Attempts to Justify Ranking Cal Ahead of Tennessee and:

Special notes for next year

Should have had a best picture award, a best YouTube, and a best headline award.