I finally have a couple of minutes to look at the charts from last weekend, and one thing is beginning to stand out:  Stephens has been asked to do very, very little.  Perhaps that's not any surprise, given his relative lack of practice time with the first unit and the driving need for a guy who doesn't cause the huge mistake(s).  But take a look at the basic stats for yourself and see if you come to the same conclusion I do:

First up: The Table

My first observation here is the number of completions and attempts.  Nick has 2 of the 3 fewest attempts-per-game (and 3 of 4) in the season, and has yet to complete more than Jonathan in any game except the Auburn debacle.  However, one other stat stands out:  zero interceptions.  Nick hasn't thrown much, but he hasn't given the ball away yet, either.

Next, I see that his completion percentage isn't that hot.  Some of the incompletions are receivers' faults and some are Nick's.  His NCAA QB rating is pedestrian; that's mostly due to the few number of passes, though the lack of interceptions helps.

Meanwhile, the running game hasn't been spectacular.  With Nick at the helm, the best rushing day was against MSU, where the team averaged a meh 3.6 yards per carry.  That's not bad, but it's not good enough to win many games on its own. 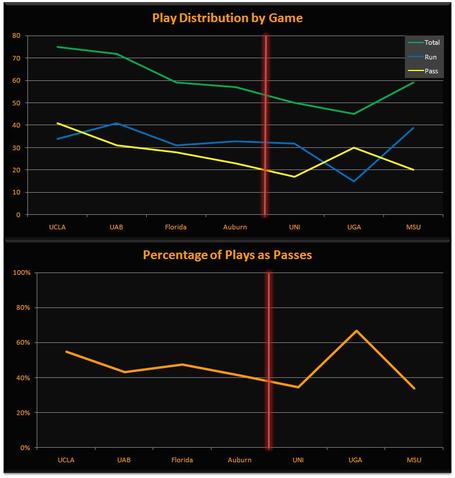 Bad news first:  the three games with the highest proportion of passes were all UT losses.  The first was UCLA, where we gave away a lead we held for most of the second half.  The other two were Florida and UGA, where the score deficit demanded a pass-only game.  Conversely, lower passing percentages meant better results, especially if you remember that UT gave Auburn 7 points (with effectively zero effort on Auburn's part).

Also, if you look at the number of pass plays in the first graph, you'll see that we're still on a downward trend.  That trend puts us on pace for about 17-18 passes against Alabama.  (If that happens, here's hoping it's because we have a 4-TD lead at halftime.)

More plays!  Yaaaay!  Finally, UT actually increased the number of offensive plays in a game.  59 is still dreadfully low, but at least that's partly our fault in a good sense. 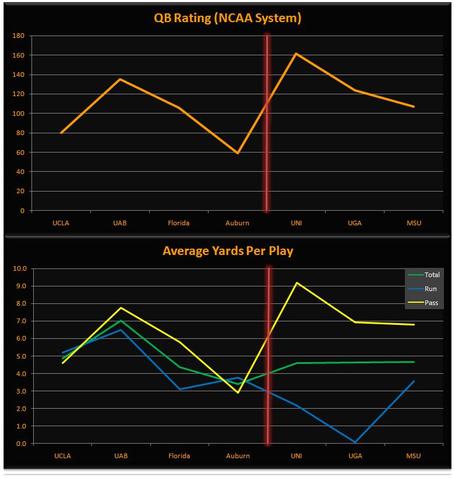 Two things to note here on the QB play:  First, Nick hasn't had a bad game yet, even if the numbers aren't particularly impressive.  His 107.1 QB Rating vs. MSU is his lowest, yet it still ranks higher than Crompton's rating against any team not named UAB.  The 6.8 yards per attempt is a nice enough number, but it really needs to be closer to 8 YPA to be fully effective.  Throwing better than a 50% completion rate would help that number tremendously.

As far as the rushing game - the UGA game still looks like a huge blip.  Right now, we can chalk that up to the UGA defense reading our plays and us not having a fully rehearsed QB.  But still, the running game has yet to approach the UCLA or UAB performances.  (Remember that UCLA's defense was the one returning unit with a bunch of healthy vets and the same DC as the year before, even if the UAB game doesn't mean much.)

Overall, the offense has averaged a very consistent ~4.6 yards/play since Stephens took over.  Again, that's an improvement, but not enough to do a whole lot.  But if nothing else, at least the roller coaster seems to have settled down.  Hopefully, we can look forward to plays that don't spell imminent disaster. 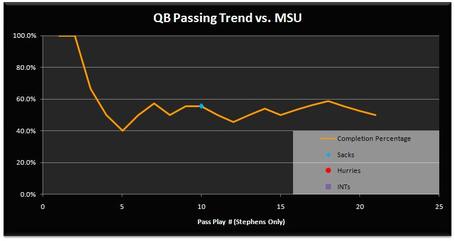 Lastly, let's take a look at the passing history against MSU.  Best news first:  only 1 sack, no hurries, and no interceptions.  (Caveat:  the "no hurries" is because NCAA.com does not list "hurry" as the reason for an 18-yard QB scramble.)  Overall, the O-line did a respectable job protecting Nick.  When they didn't, Nick was able to make the best of the situation with his feet.  Less good news:  Nick hovered steadfastly at 50% for nearly the entire game.  Again, that's not enough to get defenses to lay off the rushing game.

Those are the basic charts of the game.  I like doing these charts because they provide a nice first-pass look at the offense and make comparisons to previous games easier.  Overall, the offensive production has been consistent but unspectacular.  But, I'll take that over spectacularly inconsistent without hesitation.  At least there's something to build from now.