Share All sharing options for: Tennessee Volunteers vs. Northern Illinois: Offense to Date

With 5 games in the books, we can now take a look at some of the trends emerging in the UT offense.  (And by "trends", I don't mean a complete lack of consistency from the QB play.)  As before, I'll toss around a few pretty graphs and charts to give a gauge of the performance of the offense.

When evaluating Stephens's  play, keep in mind that I did not visually see the game.  I don't know exactly how well/poorly he threw the ball, how well the running backs ran, or how stiff the UNI defense was.  So the numbers merely give me something to focus on as a starting point for evaluation.  If you saw the game and anything in the chars/graphs jumps out at you, please leave some thoughts below.  I'm basically flying the Alps on instrumentation alone; the gauges tell me I'd like to see the Alps, but I can't tell you what those Alps actually look like from this angle.

The stats are compiled from the database at NCAA.com.  If you compare my numbers to those found at places like ESPN.com, you'll undoubtedly find discrepancies.  That's largely because ESPN et. al tend to be inconsistent because they update stats live, while NCAA will take more time to get them right.  Besides, the NCAA stats are the official stats.  There is one discrepancy that bugs me, though, and I'd like your help resolving it if you could.  You'll see it very early on.

So, onward and upward:

Let's look at the passing and running stats in a forest-view level:

Ok, let's focus in a little more on the passing numbers:

A few notes on the passing statistics in the games so far:

Now, for some odds and ends. 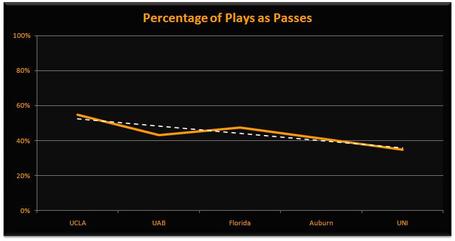 Clawson has been leaning more and more on the run game every week.  At the current pace, we'll end up with a pure running game by the end of the season, as seen by the dashed trendline.  The biggest blip is the apparent increase in the pass/run ratio during the Florida game.  However, if were were to correct for the kill-the-clock strategy at the end of the UAB game, we might find the passing trend to continue more consistently.  We're going to have to mix in more passes someday if we want to see the offense move. 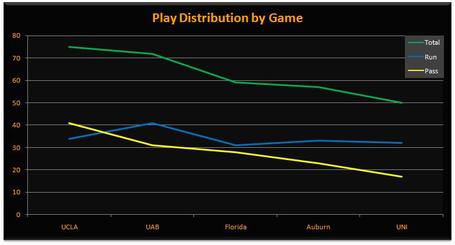 If we take another angle at the pass/run plays, we'll note that UT has been very consistently rushing the ball just over 30 times a game.  The one blip in the blue line is the result of the kill-the-clock strategy inflating the number of rushes.  However, that yellow line is astoundingly consistent; UT is losing 5.6 pass plays per game (r^2 of about 0.96 for the trendline geeks out there).  If that trend holds, UT is projected to throw 1 pass (!!!) against Alabama. (Maybe we are headed toward this.)

Teams are figuring out how to kill the clock.  I believe that teams were calling plays very quickly during the first few games of the season to avoid delay of game penalties.  However, now that teams are getting a sense of the pace, they're using up the clock and limiting the number of plays.

Getting an early lead is more important than ever before.  The team with the lead gets to dictate the pace of the game.  With the new clock rules, you can run out of bounds and still bleed the clock, which opens up the passing game for clock-killing.  The team with the lead can use the full playbook to kill the clock.  And they are.  Meanwhile, the trailing team gets a severely limited playbook, which means that having a quick lead can drastically tilt the game flow in favor of the leading team.  I don't think this was an intended consequence of the clock rules, but it's there.  UT needs to figure out a quick-strike offense.

Yellow and blue make green.  Just thought I'd throw that out there for you.