I’m sorry, but this is really for our own good.

The total righteous bummer at Cal and dishumiliarrassment in the Swamp were fading into almost insignificant specks in the rearview mirror, and up ahead, opportunity loomed large. Yes, the Vols had some baggage in the trunk in the form of a 2-2 record. But hey, at least they were in the driver’s seat in the SEC East with games against No. 6 Steve Spurrier, No. 7 Kentucky, and, if they made it that far, a highly-ranked team from the SEC West (probably No. 4 LSU) still to play. Win those, and who knew how far we could go.

First, though, we had to maneuver through the road hazards in Tuscaloosa. There was some temptation to minimize the importance of the Somewhere Around The Third Saturday In October. Paul Finebaum was saying the rivalry didn’t really mean anything anymore. New Tide coach Nick Saban was treating it like it was just another game. Despite this blatant heresy, Bama fans looked like they were actually trying to break in this new coach rather than just breaking him like they did all the others, so they gave him the benefit of the doubt. Finally, Tennessee had pretty much owned this series since 1995. Sure, there was 2002 and TSOWWDNS, but we lost to everybody in 2005. Yeah, all the face-up cards indicated that this game really wasn't all that important.

But Vol fans weren't fooled. Finebaum was a stir stick, Saban was a liar, and it did not matter how many times we’d beaten Alabama in the past, It Was 'Bama. Besides, the Tide appeared to have statistical advantages in five of seven key areas. And oh, if I didn’t make this clear: It. Was. ‘Bama.

What that blasted thing doesn’t show is that Alabama actually kicked off but got the ball first. That’s right, Nick Saban called an onside kick for the first play of the game. You do know that he's only one consonant removed from the Father of Lies, right? You do know that at this time he was losing at a pace of $666,666 per game, don't you? Tell me you know that he's The Deceiver. You don't? Well then, that just means you've already been deceived.

Tennessee actually hung with the Tide for awhile, that is until THE D.J. HALL SHOW!!! The 'Bama wide receiver went bonkers against the Vols, catching 13 passes for 185 yards, leading to the following in-game comment from jbragg:

Hi, this is for Phil and John, long time listener...first time caller... HOW IN THE WORLD DOES EVERYONE IN YOUR SECONDARY NOT KNOW WHERE DJ HALL IS???!!

To be fair, our entire defense was positively horrid. GVX’s John Adams dubbed that side of the ball "Career Day," as in what offensive players on opposing teams have when they play against John Chavis’s unit. Even old positive me said in an interview with The Sports Tap later that week that it was like all of our defensive players had a concussion at the same time. Chavis could have lifted a hand and yelled, “How many fingers am I holding up?” and the entire unit would have said, “Thursday.” In unison. It was awful.

The record of wrongs:

This doesn't taste so good, but it builds up resistance.

This was a good thing:

But the penalty after it was not. (Side note: does that play work every single time?)

But the penalty that caused/negated it? Uh, no. That would be no.

This was very good:

But the referee was at risk of chaffing his passenger side air bag with a tattered yellow flag.

If you thought it was ugly after the Florida game, then yeeowza, we were talking Elephant Man after the pitiful performance against the Tide. Fans and media alike were tossing out that nice round 100-37 stat, the combined score of our games against our two biggest rivals, like it was a grenade. Some fans suggested that Fulmer’s earlier $1,000,000 donation to the school was a ruse, a preemptive strike designed to secure his job in the event of a disaster such as this. Even the normally level-headed XRayVol went on an uncharacteristic tirade in the open thread. No one dared blame him. We were too busy trying to stop the flow of blood from biting our own tongues.

1. Not only did Tennessee get badly beaten by a rival this week, but Florida won and regained control of the SEC East. 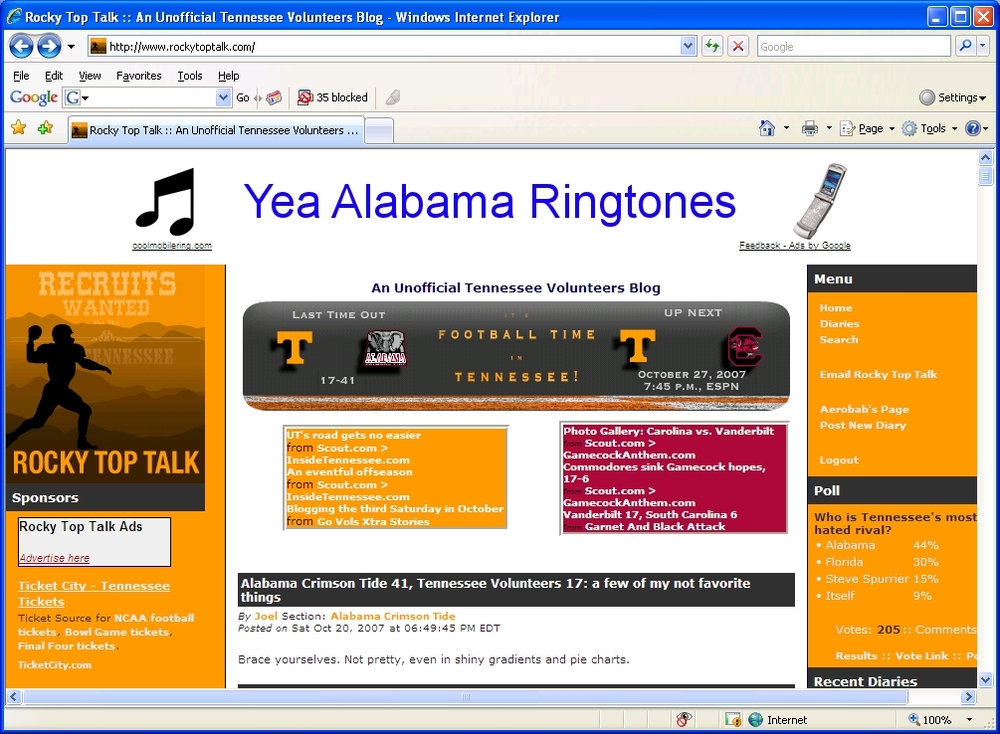 Sigh. Double my Lexapro, please. It was not a good day. We’d blown our second chance. The season was essentially over.

Steve Spurrier up next.