Anatomy of an -ffense: Tennessee Volunteers in 2008 (so far)

Share All sharing options for: Anatomy of an -ffense: Tennessee Volunteers in 2008 (so far)

If you've learned anything about me at this point in time, it's that I like to play around with numbers.  My first-ever RTT post came last year before the Arkansas game, where I gave Joel some charts to show that the magic mark for beating Arkansas was to hold McFadden under about 150 yards.  In fact, it's been a little frustrating for me during these last few months because there have been very few numbers to tinker around with; having a new offensive coordinator and a completely unknown system will tend to do that to a guy.

But now that we have 4 games under the belt (a third of the season already!  Well, 33.333%; repeating, of course...), we have some honest-to-goodness numbers to examine.  Naturally, they're not exactly the numbers we had hoped to look at, but it's better than nothing.  (Well, sorta.)

I had hoped to be able to do some fancy analysis of the Clawfense, but I can't honestly do that.  The offense has been so mistake-prone and ugly, that I don't think we can rightly say we've even seen the Clawfense.  (After all, how many offenses never run any kind of a misdirection play?  The only one I remember was the dropped pass from the G-Gun against Auburn.)  So instead, I'll look at the basic numbers: QB performance and a little run/pass analysis.

So without further gab, let's take a look at a few of the stats that UT's offense has accumulated to date.  Pretty pictures and tables follow after the jump, but there's no fancy mathy stuff to worry about.  We'll keep it straightforward because I don't think we can honestly do anything more.

Oh, and the first chart is ugly - all messy and spaghetti-y.  I intentionally violated a rule of chart-making (don't put too much on one chart) because I don't plan on using it a whole lot.  Explanation will follow, so don't panic if you're not a numbers type. 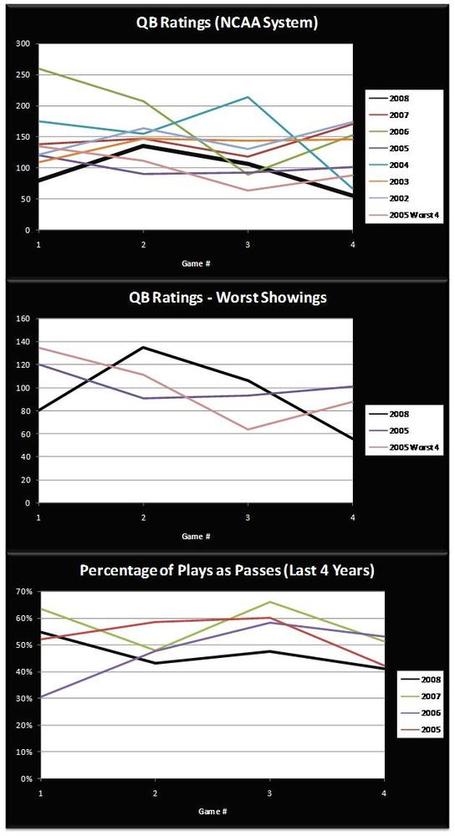 (Ok.  Remember, kids: don't put 8 different plots on the same chart unless you're only making generalizations.)

In the second chart, you see the 4 worst showings for QB ratings:  2008, 2005 and 2005 (4-game losing streak).  It's a little easier to see in this graph than the first graph that UT QBs tend to improve over these 4-game spans, except for 2008.  (Again, ugh.)  But contrary to the immediate opinion, Crompton's ratings are not worse than those in 2005 - at least not measurably so.  They are effectively equivalent, even if you factor in the level of competition for those 12 games.  So by the NCAA QB rating metric, we have seen a passing game roughly equivalent to the 2005 season.

In the third chart, you see the percentage of offensive playcall that were pass plays.  For example: in 2007 Game 1, over 60% of UT's plays were pass plays.  What you can see here is that Clawson is calling fewer pass plays than what we've seen over the last 3 previous years.  This is no surprise: Clawson has always run about 55% of the time, while Cutcliffe preferred the quick passing game and 2005 was basically a year-long QB audition.  Oh, time for a quiz question!

The answer is after the pretty picture: 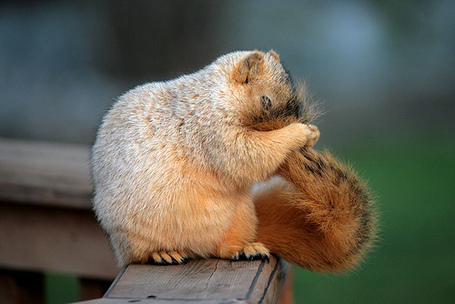 Answer:  In SEC games, UT has a higher pass-play percentage than in non-SEC games.    This holds true even for non-Florida games.  In fact, this trend is iron-clad all the way back through 2002 except for Florida 2003, where UT won and pounded Florida off the field.  I was rather surprised to see just how consist... wait, what?

Well, I'll be!  In 2008, UT saw a steady decline in the passing ratio, even in nonconference games.  In fact, the trend is very linear with the exception of the UAB game.  When you remember that the UAB game was about a kajillion degrees and UT spend the second half killing the clock, that makes sense.  If we could somehow factor that out of the equation, I think you'd see a consistent decrease in the pass playcalls in 2008.  Not even 2005 shows such a trend.  For those of you who are looking for evidence of a reduction of Crompton's responsibilities in a game, here you go.

Alright.  There's more in those charts, but those are the major finds.  The rest is small stuff, so let's move on to other pretty charts.  Let's compare a few QB stats directly.  The following 2 charts show Yards-per-Attempt (YPA), Completion percentage (Comp. %), and QB Rating, comparing 2008 to various years.  Note that YPA is multiplied by 10 to make it easier to read.  No, UT was never getting 50 yards per pass attempt.  If they were, we wouldn't be having this discussion right now. 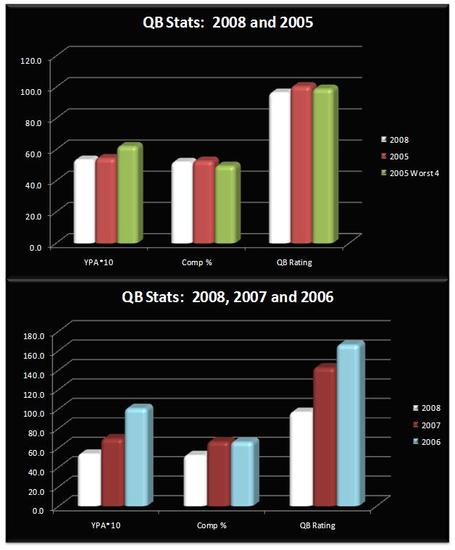 In the first chart, you see the overall values of 2008 compared to the beginning of 2005 and the 4-game losing streak of 2005.  That is the statistical definition of equality, right there.  In short, 2008 QB play is equivalent to much of 2005's QB play.  In 2005, UT was waffling between Clausen and Ainge for much of the season (in fact, the 4-game losing streak started with Clausen and ended with Ainge), so inconsistency might not be surprising.

In the second chart, you see 2008 compared to the Ainge-Cutcliffe years.  You don't need a numbers freak to tell you that there's no good comparison there; 2008's passing performance doesn't come close to previous performance.

Now, you didn't need a pretty chart to tell you that QB play this year hasn't been a pretty picture.  But it does help give a sense of perspective.  Obviously, something is amiss with the passing game, and general observation will put most of the blame on Crompton's inaccuracy so far.  Can he recover?  Will he even be given a chance?  We'll find out.  We just know that it's not up to par.

Ok, moving on.  Here is the last set of charts (tables, really) that I'll post here.  These are passing and rushing stats for the first 4 games for 2008 through 2002, and those dreaded 4 losses in 2005.  The games that UT lost are highlighted in red.  (In 2002, I guessed at the QB because the stats start to flake out there.  Going further back would have required intensive research (ie. non-internet stuff) so I stopped there.)  I'll put a few observations in bullet points below, but there's more to be noted than what I say.  Feel free to add in the comments anything else that stands out. 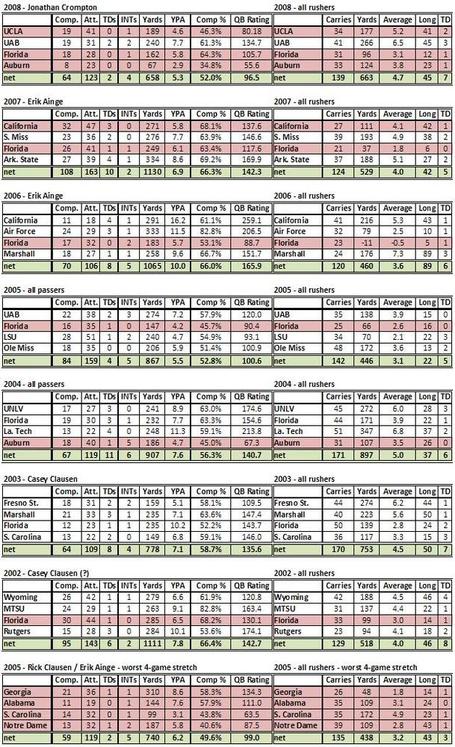