Share All sharing options for: Tennessee Volunteers 73, LSU Tigers 79: time is running out

I wish I knew how to spell what a sigh sounds like because [sigh] just doesn't really get there, you know? The Vols came out and showed fans that they were correcting things, improving weaknesses, and mitigating disadvantages, but, as has been the case so often this year, in the process of fixing one thing, something else broke. Maybe it had more to do with the fact that LSU had more stringy players than I have ever seen on a single team, but Tennessee could not rebound the ball despite the fact that it's been a strength for this team all season. They finished the game with 31 boards, only five off from what LSU had, but most of these came as they were digging themselves out a hole that proved too deep. As you see so often in basketball, the Vols made the game interesting by digging an early grave and then climbing out of that hole only to find that they expended so much energy doing so that LSU only had to nudge them one last time to get them back into the death hole.

There were several positives to take away from this game, though, I think.

Wayne Chism. Because I've officially lost count of the games during which he's played consistently well, I am hereby declaring Wayne Chism Consistent. Wheezy had 19 points, nine boards, three assists, three steals, and one block. He hit 5-14 shots from the field, 4-6 from behind the arc, and 5-6 free throws. He has arrived as a big time, consistently excellent basketball player for the Vols. In keeping with Bert Bertlkamp's trademark "MUNNAY!" whenever a Vol hits a three, we here at RTT will from this point forward follow Will's lead and yell "CHI$$LE!" whenever it's Wheezy who hits one.

Emmanuel Negedu. Negedu played only fifteen minutes, but was perfect for most of it. He missed his last shot, but before that he was 2-2 from the field, 1-1 from three-point range, and 6-6 from the free throw line. He had two rebounds, one assist, and one block. I think his biggest contribution to the team, though, is in the immeasurables. Good things just seem to happen when he's in there. He's extraordinarily active, in the right places at the right times, and somehow seems to make the rest of the team better.

Bobby Maze. I really, really liked what I saw out of Maze tonight. It was almost as if Pearl told him that he just wanted Maze to be like JaJuan Smith was on defense for us the last several years. He was all over the place on defense, and whenever his guy had the ball, he was in his face, hounding him, not letting him get comfortable while surveying the offensive set. Keep that up, Mr. Maze. We love it. Maze also showed some real savvy on the offensive end, not pushing anything and even at one point, pulling the ball out of the paint when he was triple-teamed, and then immediately recognizing that as he retreated, so did the defense, leaving a clear path to the basket, which he immediately exploited. Good stuff.

The Vols were aggressive getting into the lane, and against a team less stringy than LSU, I think it would have won the game for them. But LSU is stringy (my new favorite word at least for this evening), and too much of the time the Vols got into the lane, Tasmanian Mitchell or some other stringy dude in purple and gold swatted it, swiped it, or tied it up.

Tyler Smith. No one's questioned Teardrops' consistency, and it's because he hasn't had a bad game all season. Until now, that is. Smith finished with just nine points, seven boards, and two assists. He also only shot 2-7 from the field, shot 1-5 from behind the semi-circle, and had five turnovers, including a key one at the end of the game as the Vols were trying to distance themselves from the edge of the grave.

Scotty Hopson . . . is a freshman. In 29 minutes, Hopson had eight points, an air-balled free throw, and the game-deciding turnover, just to name a few lowlights. The Hopson/Tabb offensive/defensive substition at the end of the game really backfired, as Tabb gave up a three-point play on his end, and Hopson committed turnovers on his. Hopson is a freshman, though, and inconsistency is a core class, so that's to be expected.

Bottom line, the Vols are improving. They could be very good given time. But will they be good enough given the time that we have? That's the question. 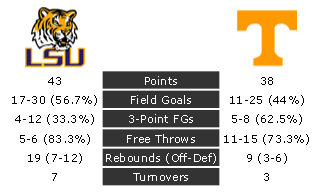 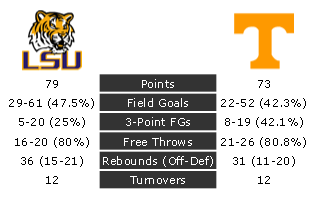