The SEC Power Poll is upon us again, and here is the ballot for Rocky Top Talk.  Explanations, numbers, etc. follow after the jump.

The raw numbers, with the highest in each category (except Win/Loss) in green and the lowest in red: 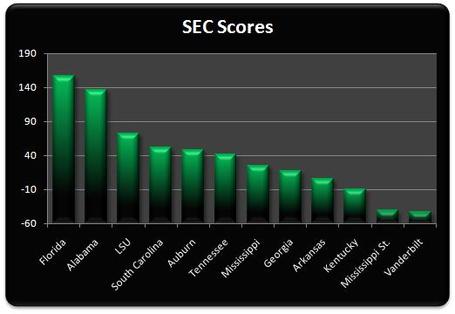 Unsurprisingly, Florida and Alabama are head and shoulders above everybody else.  Likewise, MSU and Vandy bring up the rear.  In the middle, things get dicey.

How the SEC Fares 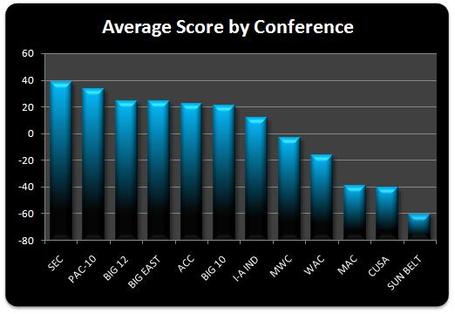 Unsurprisingly, the SEC is still overall the strongest conference in the NCAA.  The biggest advantage the PAC-10 has is the lack of a huge bottom end, thanks to having only 10 teams.  (Wazzou is their cellar, but everybody else is at least passable.)  But otherwise, the rest of the BCS conferences are basically a pick'em.  The MWC is the best mid-major, but the nonconference slate didn't quite hold up this year.  That BYU loss to FSU and Utah's loss to Oregon made a pretty big difference in their overall strength, as they just don't have the top end to balance out New Mexico.

So basically, even in a down year for the conference, the SEC is at least legitimately competitive against anybody else in the nation.  And this year, there's really nobody to stop the Florida / Alabama from playing for the fragile football thingy.

By the way, is it too early to speculate about a Florida/Alabama rematch for the NC?  One Texas Longhorns loss might be enough to do the trick, and they're vulnerable.