The big table shows all of the numbers in their grand glory.  If you wish to experiment, here is the data in Excel 2007 form, and in Excel 2003 form.  If you're not one for the numbers, just scroll past them to the comments.

Here are how the conferences stack up with a straight average of the teams: 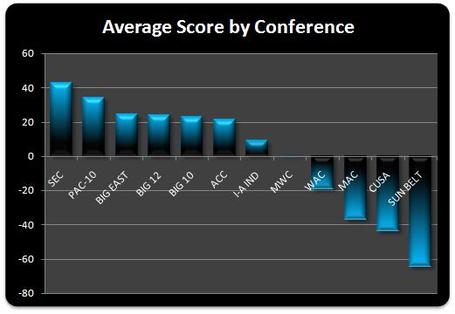 The SEC is gaining a little more separation from the rest.  With few nonconference games left, this will probably hold.  The PAC-10 is a very solid second because (a) they have few bad teams, and (b) they have some surprisingly good teams, like Arizona, that the media chooses to completely ignore.  The rest of the BCS conferences are pick-ems, and the Mountain West suffers with several genuinely bad teams dragging down the efforts of TCU, BYU, Utah, and Air Force.  Don't get worked up about the 1-A independents; that's only Navy, Notre Dame, and Army, and Navy is the best of the three.  I just include them for completeness.

Let us not speak of the Sun Belt, ok?