As always, our Power Poll ballot is taken directly from the RTT computer rankings for the BlogPoll.

As always, the green highlights are the best in each column and the red highlights are the worst.  Since Florida doesn't have Alabama on the schedule and they can't play themselves, they will likely never sniff the 'toughest schedule' mark, but they're close to a clean sweep on everything else.  Some other observations:

And in graphical form, for those who prefer pretty charts to raw numbers: 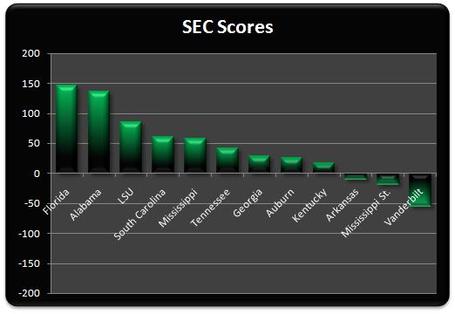 The "no Win/Loss" modification that Incipient_Senescence is a pretty neat trick and helps gauge teams without their win/loss records (i.e. purely by on-field performance without regards to end result).  Doing so produces the following grid:

And also in pretty graphic form: 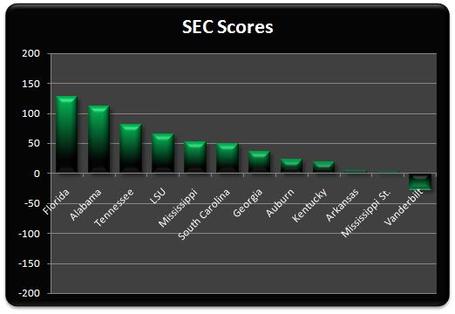 Tennessee is the team whose on-field performance is most above their win/loss record.  South Carolina dips the most because of being passed by Tennessee and losing a sliver of ground to Ole Miss, but that's really inconsequential.  For this, you would expect Tennessee to outperform their remaining competition, assuming everybody plays to their typical level.  But Florida and Alabama are still clearly the best, without or without the wins and losses.