UPDATE:  If you're interested in seeing the numbers with the increased weight for strength of schedule, take a look here.  That list is the next iteration in this week's draft, and may need a bit more tweaking.  A small bump to the Win/Loss weighting may be warranted, but that's up to you all.  -[Note by Hooper, 10/06/09 7:40 AM EDT ]

Ok, the numbers are finally in.  The moves I anticipated earlier did pretty much happen, as well as a few I didn't notice.  Midmajors appear to have a tough road ahead (mostly), especially if midmajors include "Big East".  Everything is after the jump.

More motion than I expected...

THE QUESTION TO YOU IS:  SHOULD THE STRENGTH OF SCHEDULE BE WEIGHTED MORE HEAVILY?

Most of the oddness that I see would be fixed by increasing the importance of strength of schedule.  But take a look at the numbers below.  When you read the table, remember that positive numbers mean above average (i.e. better) and negative numbers mean below average (i.e. worse).  If you see a factor that seems to consistently improve the ballot by increasing it or decreasing it, leave a comment.

Oh, and look at this graphical representation to see how closely most of the top 25 teams are rated. 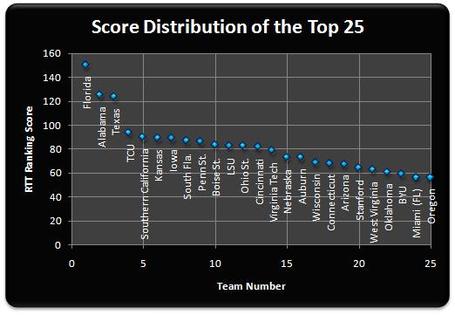 Basically, TCU through Virginia Tech are all within a reasonable margin of error of each other.  So don't hesitate to fire away.  I have no compulsion to switch Alabama and Texas, even though they are close, though.