During the podcast this week, Will made an offhand mention that I might be able to do a game review on the 31-yard touchdown run by Montario Hardesty in the fourth quarter - the run where he escaped about half the defense in a serpentine course to the checkerboards to get UT back into the game.  Due to some deadlines I had during the week, I had not actually settled on a review topic, so I gave it a look-over to see if there was anything more to write about than simply a "wow, great play!" post.  And as it turned out, there is.

But not about Hardesty.

To set the stage, let us remember the play.  The Volunteers were down 23-6 early in the fourth quarter and were managing to put together an extended drive into Auburn territory.  Thanks in part to a fourth-and-seven conversion by Gerald Jones (who very nearly bobbled another pass away), Tennessee was facing a second and seven from the Auburn 31 yard line.  There was just under 12 minutes left on the clock, which was enough time to continue to take what the defense was giving, so Lane Kiffin dialed up a screen pass in answer to the deep umbrella coverage of Auburn's defense.  In many ways, this play was extremely similar to the screen pass that Chris Walker destroyed against Ohio in the previous week; the defense was playing soft to prevent the deep play and the defensive line was largely unsupported.  The big difference was that, in the Ohio game, Chris Walker made a very heads-up play by reading the screen and positioning himself to defend the pass; in the Auburn game, the play was at once saved by a heads-up Chris Scott and later given up by an overeager Josh Bynes.  (Note: if you have the means, I highly recommend watching the play in motion via ESPN 360 or by the SEC Digital Network.  What happened is really cool and worth the watch, but still pictures really don't do it justice.)

Let's look at the play: 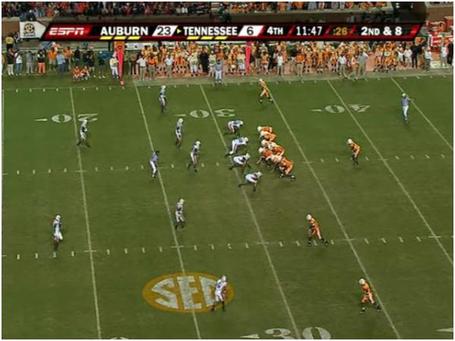 You can see the deep defensive umbrella by the secondary.  The plan is clearly to bend-not-break and make the drive progress slowly. 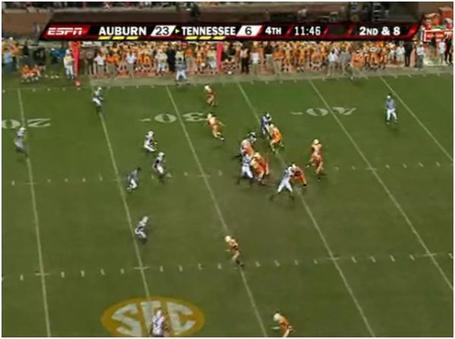 In the initial engagement, you can see the right guard allowing the defender by on the upper side of the screen.  The center and left guard - who are double-teaming the other tackle - are steering him toward the upper side as well.  This is because the screen will go to the lower side of the screen and they don't wish to block the tackle into Hardesty.  The linebackers are sitting in pass coverage, though the middle linebacker has his eyes on Hardesty. 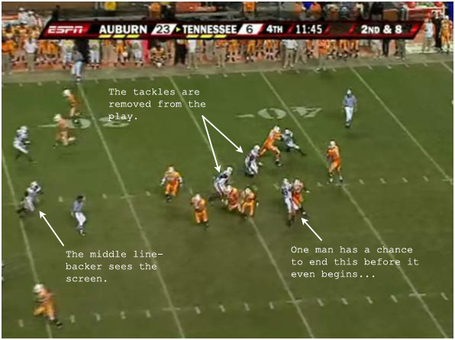 It's very hard to capture this in still frames, and I really do recommend you go back and watch the live action again if you get the chance.  The pass-rushing defensive end now realized the play and realizes that he can neither get to Jonathan Crompton, nor fall back to cover Hardesty.  So he does what every defensive linemen is taught to to: get his hands up in the air. 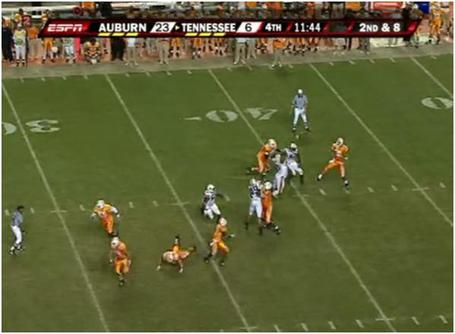 The end is Michael Goggans, who is listed at 6'-3" and 257 lbs. and is humorously listed as having a 0" vertical on Rivals.  While obviously not true, it did foreshadow the events on this play.  Goggans was directly in the path between Crompton and Hardesty, and that extended arm presented a very real problem to the play.  In normal conditions, he just might have been able to get the height necessary to deflect the pass.  Look at it from the replay camera, which unfortunately gives very poor resolution in freeze frame mode. 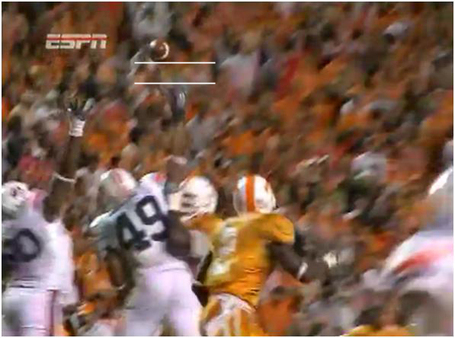 I added the lines to illustrate the difference in height between the ball and his hand.  But what you'll also notice is that his head is barely higher than Chris Scott's.  Scott stands 6'-5" and is firmly planted on the ground.  Goggans stands 6'-3" and is now about 3 to 4 inches above Scott - yielding a whopping 5 to 6 inch vertical.  Ok, even I do better than that.  The key, as you can see in both of the preceding images, is that Chris Scott is fully engaged in a near-bear hug with Goggans.

Blocking so closely into somebody is a bit unusual - tackles in particular prefer to keep the blockee at arms' length, where they can maintain leverage and have more room to react.  One rushing technique is actually to get inside the tackle, where the tackle's long arms lose their effectiveness, then spin to either side; without space, the tackle has a very difficult time keeping containment without incurring a holding penalty in such a situation.    So, for Scott (a very good left tackle) to willingly allow Goggans in so close is abnormal.

The difference is that Scott doesn't care if Goggans gets around him.  It's a screen play, and there is zero chance of Goggans registering a sack.  The goal here is simply to keep Goggans from interfering with the play, and his only chance to interfere is to swat the ball down.  So Scott moves in, gets all close and personal, and removes Goggans's ability to make a jump.  Just for sake of argument, let's say that Goggans has a 20" vertical in uniform.  In this play, he manages about 5".  Scott has cost Goggans about 15" worth of height, which very well may have made the difference between a touchdown and an incompletion.

To be fair, a swatted ball relies on more than just height.  Goggans would also have needed the right timing and the right angle to get his hand in position, and Scott also pushed Goggans to the side in mid-air.  But in a game of inches, Scott gave an extra 15 of them to Crompton and Hardesty - much to the delight of Vols fans. 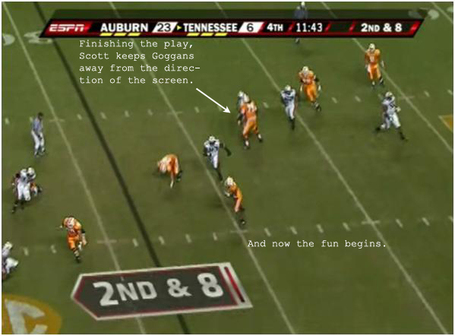 In part 2 of the touchdown play, we now focus on #2 - Hardesty's amazing run through about 37 defenders.  But again, much of this is not so much about the great play by Hardesty (which was indeed great), but by a mistake in the defense.

Auburn actually had a decent defense for the screen.  After Hardesty caught the ball, he turned to face four Auburn defenders. 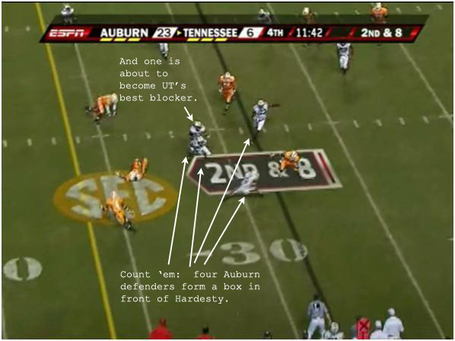 Hardesty makes Walter McFadden miss: the streaking fellow at the bottom of the screen bites on the juke and Hardesty spins to the inside.  By spinning to the inside, Hardesty turned this play into a minor gain (note the LOS and first down line) but should have been tackled by the others after about 2-3 yards. 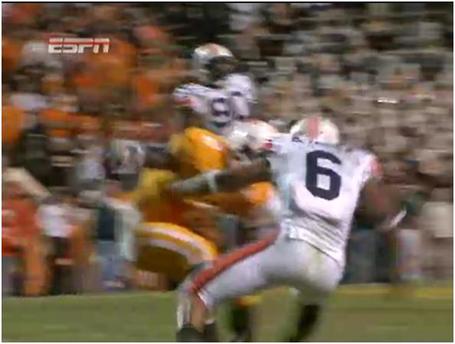 Back to the play, what you'll notice is that one defender is running right over another: 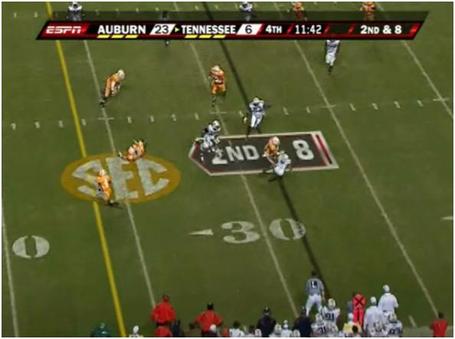 The overrunner is Josh Bynes, and he is proceeding to take out a player whom I believe is D'Antoine Hood.  (His number is obscured on film.)  But in the process of flattening Hood with a perfectly legal block in the back, Bynes trips over Hood and removes himself as well.  You'll see in the next two images that, instead of spinning straight into two would-be tacklers, Hardesty gets a great view of two guys playing Twister without the pretty mat. 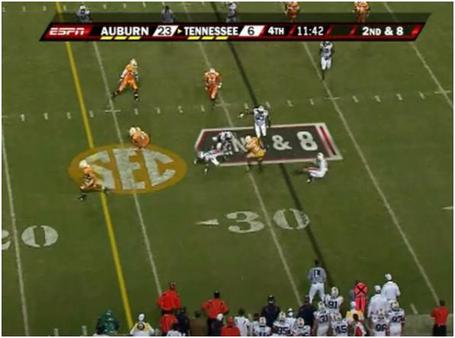 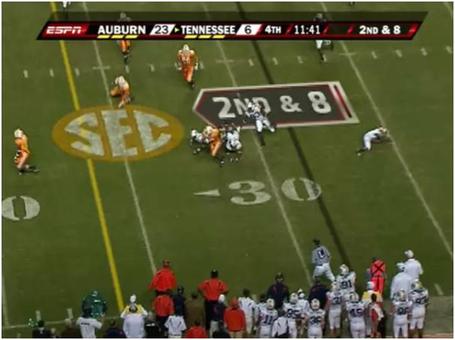 And as the coup de grace, Bynes has graciously fallen to the field directly in the way of Mike Blanc, the fourth man of the defensive box that looked so imposing just a bit ago.  While Bynes is quickly learning to appreciate that his linemen do indeed have more than a 5-inch vertical, Hardesty is now past the entire defensive line, a linebacker, and two defensive backs.  The rest of the run is actually fairly standard running-behind-your-blocks stuff.

But if it weren't for the heads-up technique and commitment to finish the play that Scott exhibited, as well as the overaggressive pursuit by one Mr. Bynes, this would have been at best another dink-and-dunk play by the UT offense.