NCAA College Football Quiz: Who Am I?

Share All sharing options for: NCAA College Football Quiz: Who Am I? 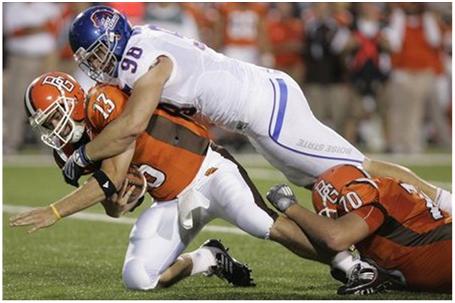 Tyler Sheehan, of the Bowling Green Falcons, is currently averaging 31 completions on 48 attempts per game this season for a little under 2 touchdowns and 1 interception per game.  He's a little behind pace for career passing yards unless Bowling Green makes a bowl game.  His passer ratings were:  132.6 (sophomore), 133.6 (junior), and 131.7 (senior, currently).

The Falcons are in their first year under new head coach Dave Clawson.  In the season prior to Clawson's arrival, the Falcons rushed 407 times and passed 274.  In Clawson's first season, the Falcons currently have 241 rushing attempts and 283 passing attempts. They are still in contention for their divisional crown in the MAC, although it is an outside shot.  With their remaining schedule, they will most likely finish 2nd or 3rd in the division this year with a 7-5 record.