The Virginia Tech Hokies dominated the Tennessee Volunteers in every facet of the game for a 37-14 win in tonight's Chick-fil-A Bowl.

There was a brief period of time when it looked like the Vols might actually make a game of it. After the Hokies put up a 14-0 lead, Tennessee strung together a series of close calls that actually went its way for one score, and capitalized on a Janzen Jackson interception for another to tie the game with 18 seconds left. The Vols would certainly regroup at the half and start the second with a clean slate.

Or so we thought.

Tech quarterback Tyrod Taylor instead threw a 63-yard Hail Mary to Jarrett Boykin, who somehow got behind the entire UT secondary, which should have been in prevent mode, but let a knee hit the turf just shy of the end zone. Vol fans still pulling their hair out as a result of the play quickly substituted profanities for cries of relief when the teams headed to the locker rooms because time had run out. They quickly reverted to hair-pulling when the officials reviewed the play and determined there were two seconds left on the clock, which allowed Tech to hit a field goal and go into the locker room up 17-14 at the half.

The snapshot at the half was telling: 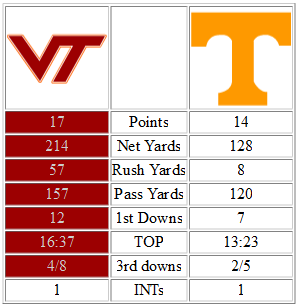 The Hokies may have been up only three points, but they had beaten the Vols in every way possible, including holding Tennessee to 8 yards rushing. The question then was whether the Vols had weathered the storm without digging too deep of a hole and would come out and make a game of it in the second half or whether they would just keep digging after the break.

We might have divined the answer from left tackle Chris Scott's Facebook wall (hat tip: raynoch46) as he had used halftime to update his status with a complaint about the officials' decision to add two seconds to the clock to end the half. Perhaps that wasn't the telltale sign of a lack of proper focus it appeared to be, but whatever the case, the Volunteer offense scored no more points in the second half, and the defense gave up an additional 20.

Many will point to Denarius Moore's drop of a certain touchdown with the game still in doubt (and another drop in the end zone later) as the iconic play(s) of the game, but I don't think that's quite fair. Moore had four catches for 67 yards and appeared to be the most productive player on the team. Montario Hardesty had more receiving yards, but his came from the backfield, and Gerald Jones had a handful more, but most of his came late when the game was out of reach and Tech was in a game-ending prevent. Moore certainly blew an absolutely huge opportunity, but he didn't lose this game.

This loss was a team effort, and Virginia Tech was simply better. At everything.

So Tennessee completes Lane Kiffin's first year with a 7-6 record, a mere one game better than 2008, the Season of Constant Sorrow that got Phillip Fulmer fired. Rival fans will crow that Tennessee made a mistake making a change, made the wrong change, and paid too much for that change based on the final record. Wrong. It may only be one game better, but 2009 was progress. The wins were better, and although losses are never fun, most of them were somehow better, too. Plus, with all of the attrition, we're basically playing with three classes, three-quarters of a roster, and our talent is not yet up to par. Based on last year's recruiting class and the early returns on this year's, we'll get there.

Remember, Nick Saban took Alabama to a 7-6 season his first year in 2007. In 2008, his team finished the regular season undefeated before losing both post-season games. So far in 2009, he's undefeated, the SEC Champ, and the favorite to win the National Championship.

The Vols are not on that identical path, as we've got serious roster issues that will preclude much more progress next year than this. But we do seem to be heading in the right direction, despite the narrow view taken by rival fans engaged in wishful thinking. We had much more to be happy about this season. We could have marginally more in 2010. And the signs right now point to us getting back to being ourselves in 2011.