No, I haven't watched the Oscars in many years either, but they're airing on Sunday. With that in mind, and since we all love lists and tenuous pop culture tie-ins to college football, here is a list of which Hollywood movie star would play each SEC football coach in a movie. 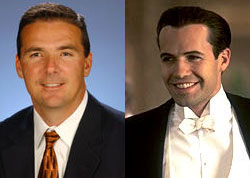 Billy Zane played snooty rich passenger Cal Hockley in James Cameron's 2005 drama Titanic. Hockley never passed up a chance to twist the knife in those less privileged than himself. He made Leonardo DiCaprio downright likable by comparison, a stunning feat of theatrics. Likewise, Urban Meyer has united the rest of the SEC in their hatred of him by being wormy and never passing up a chance to run up the score on teams with lesser rosters. 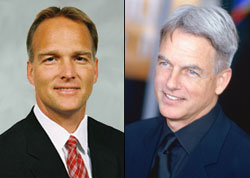 They're both named Mark, and they look enough alike with matching butt cuts, sloping foreheads, and laid-back demeanors. If you saw Harmon playing Freddy Shoop in Carl Reiner's 1987 comedy Summer School, you'd know they both started out with big plans that had to be cancelled on account of a group of underachieving misfits. Shoop dreamed of a tropical vacation with his girlfriend, and Coach Richt had hoped for an appearance in the national championship game last season. Both plans ended in disappointment. 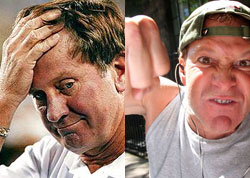 Both are named Steve. Both have anger management problems. Both remember when they were at the top of their respective professions, and it seems so long ago. 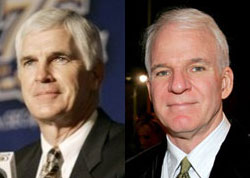 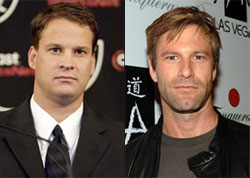 Eckhart looks the part of Kiffin, and played an offensive coordinator in Oliver Stone's 1999 football flick Any Given Sunday. Perhaps more prescient, his turn as Nick Taylor in Jason Reitman's 2005 dark comedy Thank You For Smoking bears a striking resemblance to Kiffin's personality. Taylor, an unapologetic tobacco lobbyist, was an arrogant sleazeball hated by everyone except for the tobacco industry, his family, and a small group of outcast lobbyists. Likewise, Kiffin is perceived as a sleazy jerk by everyone except for Tennessee fans and maybe his family. Eckhart played Two-Face in The Dark Knight, which is nominated for several Oscars this year. 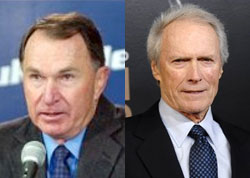 In his most recent film Gran Torino, Clint Eastwood stars as an old dude who actually says "get off my lawn." I frequently imagine Brooks saying that when he's not talking about bull[Fulmerized]. Eastwood was snubbed by the Academy this season. Brooks was snubbed by every defensive coordinator in the league on the way to a 106th place finish in total offense out of 119 teams in 2008. 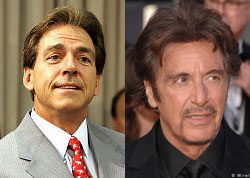 Both are short with dark hair. Both wear expensive suits. Pacino played a football coach in Any Given Sunday (as a foil to Aaron Eckhart/Lane Kiffin no less!) and Satan in Taylor Hackford's 1999 film Devil's Advocate, so he has plenty of practice for the role already. 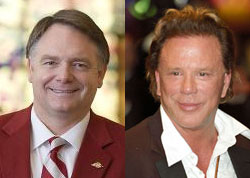 Two seasons ago, Houston Nutt "resigned" as Arkansas coach soon after beating the top-ranked team in the country. Razorback fans went all Woodward and Bernstein on him, obtaining his cell phone records through Open Records Requests, revealing some embarrassing text messages to boosters and a relationship with a female newscaster. Mickey Rourke was charged with DUI while riding a scooter in 2007 and earned an Oscar nomination for his role in The Wrestler in 2008. To the extent that a pea brain like mine is capable of understanding such matters, I believe them to be operating on the same wavelength. 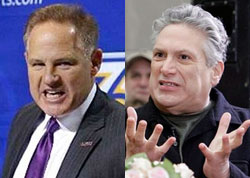 It's possible Les Miles is really just one of Houston Nutt's multiple personalities. The ideal situation would be to make a film where Miles and Nutt played each other in the style of the 1988 Judge Reinhold-Fred Savage vehicle Vice Versa. Unfortunately, for this exercise we need an actual movie star, so for Les Miles I'm going with Harvey Fierstein. My logic? The only way for a mere actor to capture the whirlwind of teeth, fists and Aqua Velva that is Les Miles is to make a casting decision that Les Miles would make: counterintuitive, strategically unsound, and undeniably entertaining. 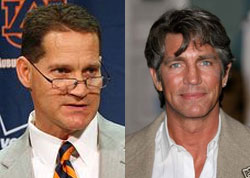 Eric Roberts is the guy you hire for your movie when no one else is available or you don't have the budget leftover for someone good. Do I need to spell this one out? There are also Oscar and interlist tie-ins here, as Roberts played mobster Salvatore Maroni in The Dark Knight alongside Lane Kiffin/Harvey Dent/Two-Face. 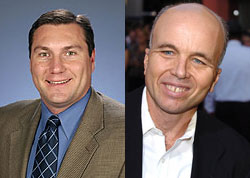 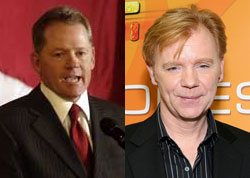 You remember David Caruso, right? He was on the fasttrack to stardom after one season on the television show NYPD Blue, only to overplay his hand and leave four episodes into the second season to pursue a career as a Hollywood leading man. This led to a pair of forgettable films, Kiss of Death and Jade, and his career seemed to die quietly. Years later, Caruso has risen from the dead on the hit television show CSI Miami. Bobby Petrino's career has followed a similar arch, starting with a promising stint with the Louisville Cardinals only to make a hasty exit and bomb miserably with the Atlanta Falcons in the NFL. Now he is trying to put his career back together with the Arkansas Razorbacks.

Which actor would give the most accurate portrayal of the SEC coach he was playing?