So far, we have looked at the spring position battles for these positions:

Now, let's take a look at one of the primary concerns coming into the 2009 season - the defensive line. 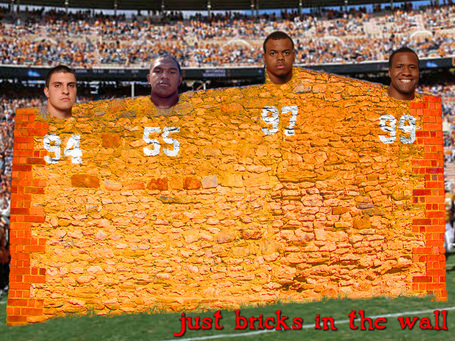 Before getting into the players, I should note that there is a small chance that a player or two may get moved around - both between the offensive and defensive lines and among the various positions within the lines.  I wouldn't expect much, but it's possible.  However, I'm only going off the roster positions as listed by UT's football site and I'm not going to speculate much within this writeup about player movement (for lack of information).

According to UT's roster, the Vols have seven defensive tackles coming into the 2009 campaign.  That's probably enough depth to be alright for the season, but you don't really want that number going any lower.  A couple of injuries would create a real squeeze and limit the options available for the defensive coaches.

Mathis is light for a D-tackle - listed at 255 lbs - and has not seen a lot of heavy action in his career.  Originally projected as a linebacker, Mathis was likely moved to the tackle position to help with depth during an injury phase.  At his lighter weight, he would likely be a more mobile and quicker tackle than most, but less likely to overpower a lineman and hold his ground in a straight-up shoving match.  If he stays at tackle, his best use is probably on obvious passing downs, so his action will probably remain limited.

Chase is a name we've heard a little more frequently in action last year.  At 270 lbs, he's a little more filled into the typical 4-3 tackle shape than Mathis.  Yet Chase is also a move-over and was originally projected to be a pass-rushing defensive end than a tackle.  He's another great fit for obvious passing downs, but his added experience and weight may make him suitable as an every-down tackle.

Big Dan has been tearing up the interior for two straight years, and has the most solid shot at starting of any tackle on the roster.  At 310 lbs, he's big enough to hold the interior against power runs.  But he's also agile:

That was 2007.  Williams played all of 2008 as well; although the stats seemed a little quieter for him, much of that was the terrific effort by the all-around defense, as well as a tendency for teams to throw those stupid 5-yard TE passes that killed us all year long.  /digress

We have one tackle on the roster who will be a junior next year.  At 6'4", 270, Thomas is - you guessed it - another D-end projection that was shifted over to the tackle position.  I remember his name having been mentioned a time or two last season, but not much else.  With Thomas, the real question will be his run-stopping skills.  Can be be an anchor on the line and keep the guard/center occupied so the linebackers are free to move?  Much will depend on how he develops in the strength and conditioning program.

Langley is listed at 6'2" and 290 lbs, which puts him more into the range of beef you generally like to see in run defenses.  Recruited as a d-tackle, his physique suggests he has a real shot a significant minutes on the field.  If you follow the spring practices and the O&W game, the real question will be his weight.  You know that the Orgeron/Monte setup is not looking for fat blobs of humanity to occupy volume; they're looking for tenacious and aggressive players.  Keep an eye on how his weight adjusts.  If he stays (relatively) lean and quick, he's in prime position to start next to Williams.

Jeffery was a tremendous grab for Tennessee.  The Florida native is listed at about 285 pounds - a great weight for an incoming tackle - and is noted more for his quickness than his strength.  As will all freshmen, his biggest concern will be his technique.  Since he tended to be a better athlete than his counterparts, did he develop some bad habits that need to be broken?  How is his stance?  His leverage?  We don't rightly know, but the coaches sure do.  He really looks like a terrific prospect for tackle, but it'll all depend on how fast he rides the learning curve.

Hughes is not listed as high up in the rankings as you'd expect.  He's 255, but hasn't filled to match his frame yet.  Because he's still growing, the speed and strength metrics are very difficult to gauge.  He's our tallest tackle, though, at 6'5" - something I really like to see on passing downs.  I expect he'll need some time to grow and develop his skills, but he should have a fine career at UT in the long run.

The roster lists six defensive ends for UT in 2009.  Like the tackle position, this is a little low for comfort.  Fortunately, ends are at a slightly lower injury risk because they're not involved in as many pilups of humanity in the middle of the line.  (That, and they don't line up directly against Auburn guards...)  The biggest hurt is the loss of Ayers to graduation, but props to Ayers for tearing up the NFL combine and perhaps becoming a top-15 pick.

Brown saw a fair amount of action at end last year.  While Ayers had one end spot locked up, Brown and Martin took up mot of the duty on the other end of the line.  Brown is most likely one of the starters coming into the 2009 season, thanks to his experience and maturity.  He's agile and quick, and ideally suited to be a pass-rusher, so he just might pull the coveted right end assignment if he grows into the new system.

Martin had his name called for a fair amount of the 2008 season and should be maturing into his full form at this time.  A 5-star prospect, Martin is fast.  He's also strong and smart, and is probably the most physically gifted D-end currently at school.  Martin is the heavy favorite for starting time of the underclassmen and, despite my words for Brown, will most likely be the right end.  You'll hear his name a lot throughout the offseason.

Walker was originally a LB projection, but was moved to end for - you guessed it - depth concerns.  His frame lies somewhere between linebacker and d-line ideals, but he can develop the strength and stamina for the line if he commits himself to it.  He will always be a lighter player (listed at 230 on the roster), so he may find himself in relief duty in the new system.  But one of the things we know about the new coaches is that they place a high value on heart and tenacity.  During the spring, watch how hard he fights.  If he's tenacious enough, he could overcome his size disadvantage.

Willie Bohannon is the definition of a project.  He's a tough player, but he's light (about 240) and a little slow (4.8 compared to 4.6 times) relative to the other end players on the team.  The new staff doesn't start people based on their 40 times, but having the physical tolls does affect your ability to produce on the field, and these disadvantages will be very difficult to overcome.  He's going to have a lot to prove to pass others on the depth chart.

Walls was originally a LB prospect - 215 lbs out of high school - who added a lot of weight to his current 266-lb form.  Is this weight due to filling into form, or did he gain a lot of the undesirable weight?  Remember the 266-lb mark.  If Walls drops down to 230 or so, then a lot of his size was probably  the bad kind.  If he stays 250-ish, then he likely gained a lot of muscle mass and may be turning into a true d-end - especially a left end.  It's too hard to tell right now, so we'll have to watch and see.  But the answer to Walls all begins with his weight and how it increased so much.

Sykes will be one of the new Vols this year, but he was originally recruited in 2007 and spent 2 years in the JuCo ranks.  He's listed at 255 and is beginning to push for 4.6 speed, which would be terrific for defensive end.  Because of his JuCo time, he may be ready to step in and play on the very first day.  It's hard to tell if he can win starting time, however, because it's not easy to compare JC performance to the other names on the roster.  If you're into dark horses, he's your guy.

If I were to guess, I would have the starting lineup look much like the picture above - Wes Brown and Ben Martin at ends (though flipped from the picture), and Dan Williams and Chase Nelson starting in the interior.  I'm least certain about Nelson because Langley has a real chance to grab the slot.  I'm most confident about Dan because of his past history and because there's nobody else who's nearly as well suited to handle the left tackle position as him.

On defensive line, incoming players usually have to sit for a while as they fill out into their still-growing bodies.  There are a few bright spots, but all of the incoming true freshmen have some physical development to do before they come into true form.

One last note:  we have 7 tackles and 6 ends on the roster.  Of the 7 tackles, 3 will be seniors.  Of the 6 ends, 1 will be a senior, but one of the incoming players is from the JC ranks.  Also, of the 7 tackles, 3 were moved to tackle to account for depth problems.  Of the 6 ends, 3 were not originally d-line prospects.  In short, we're thin on depth, experience, and on players who are ideally suited for the positions on the line.  It should be workable this year, but the coaches absolutely have to find a way to get in more d-linemen in the next class.  While one top-flight QB will go a long way toward easing our concerns, we're going to need a boatload of linemen next year.