Share All sharing options for: 1,000!!! PAT SUMMITT: A COACH WHO HAS NO EQUAL 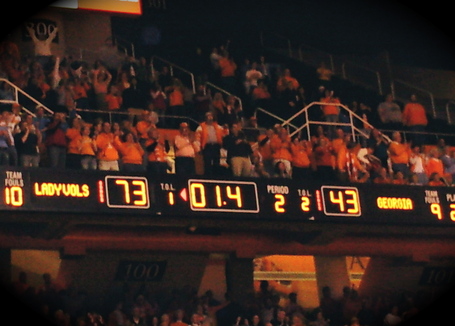 Normally, a postgame writeup flows rather naturally.  The memory is still fresh enough to replay a reasonable rendition of the game, and the live game thread adds enough to the fine details to put together a reasonable account of the event.  Tonight, however, is different.  Tonight involves two recaps - each of which are on completely different timescales.  There is the obvious recap that the very title of this post reflects, but I will take a cue from Pat Summitt's postgame conference and speak first of the game itself.

The Lady Vols played what was easily their most complete game of the year, though the opening seconds did not give such an indication.  After two failed jump balls, the Lady Bulldogs controlled the tipoff (6'-5" is really, really tall if you're a woman...) and scored the first points of the evening.  On the very next possession, Alicia Manning tweaked her knee while pivoting and landing, never to return to the game.  But from that point forward, the Lady Vols played a relentless game.  A few observations:

The Lady Vols just played a game in front of a home crowd expecting history.  The shiny round number loomed large, certainly in every mind, yet they remained focused and enver flinched.  Can they take this forward?  Can they use this experience to compensate for the lack of playing time that only comes with years?  We shall see.  But know this:  these Lady Vols are going to be another legendary Summitt team before they're done.

And now, on to the other storyline:

There's a reason that the first star in the Riverwalk belongs to Pat Summitt.  There's a reason that the Women's Basketball Hall of Fame is in Knoxville, Tennessee.  It all has to do with a lady who was born in Clarksville, Tennesse.  A lady who lived to please her father and do right by this worls.  A lady who loved basketball enough to take on coaching at a pittance of a salary at the University of Tennessee at the age of 22 to live her dream.

A lady who doesn't quit on anybody, and who never lets her players quit.

Tonight was her night.  For all she's given to Tennesee and the Lady Vols fans, it was only right that she should have a special night to celebrate her hard work and remarkable success with her team, her staff, her family, and her fans.  And with that, the only thing left to say is...