Time for a peek at the first round matchup for the Lady Vols in the NCAA tournament. 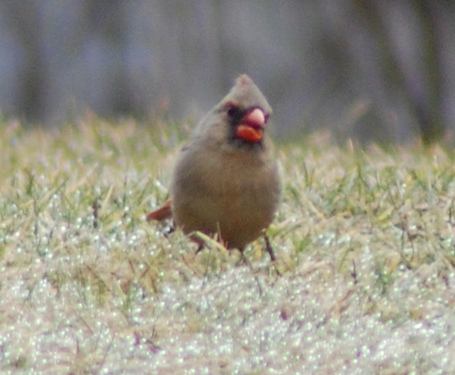 But the mascot worked so well for men's teams... (via BobMacInnes)

A member of the MCA MAC, Ball State is a team whose season may be neatly divided into two halves.  In their first 16 games, BSU went 10-6; key losses in that stretch included:  Indiana, Illinois State, Louisville, and Indiana State.  Meanwhile, key wins included an overtime tilt against Evansville (a #15 seed), Alabama, and the three Directional Michigans.  Needless to say, the initial resume was not terribly impressive, and Ball State appeard to be well below NIT levels.

But during the second half of the season, their fortunes increased considerably.  Including the MAC tournament, Ball State is 15-2 over the final 17 games.  The two losses were to Northern Illinois and Bowling Green - two teams that Ball State then beat later on.  The resume is not as impressive in the sense that MAC conference play is nothing to hang your hat on, but it does show an improvement through the season.

Why They're In The Tournament

Simple:  they won the MAC and earned the autobid.  They also won the regular season by a clear margin.  No other MAC team is in the field of 64.

What They Bring To The Floor

Ball State is known for one feature:  three-point shooting.  As is the case for many mid-major teams, recruiting enough interior players to play a balanced game is extremely difficult.  The response is to go the other direction:  play three to four guards and rain shots from the outside all day long.  Shooting from a farther distance allows for more space and more room to run, which helps mitigate the advantage of a taller, longer team.

They average 7.2 3-pointers per game, which is good enough for 15th overall in the NCAA.    They have shot 36.2 percent from three-point land on the season (for you e-FG% freaks, that equates to 54.3 e-FG%.)  Their starting lineup includes 4 guards and 1 forward - only one of whom exceeds 6 feet in height.  (In fact, of the entire 12-woman roster, half of the Lady Cards are under 6 feet tall, and the tallest is 6'-3".) The hope for the Cardinals clearly lies in keeping the ball moving around the perimeter until a clean shot opens up.  If they're having an "on" day from 3-point range, it just might be their ticket.

Fouls shouldn't be a problem for Ball State.  Throughout the season, BSU averages 16.5 fouls per game and has only had four players foul out.  In comparison, UT averages 17.2 and had 8 foulouts.  Most of that difference is explained by Ball State's reliance on their perimeter game, where fouls are less frequent.  They also play in a conference that relies less on interior play in general, so their defensive fouls have been minimized somewhat.

Looking at the Matchups

This will be a fun one.  Brianna Bass checks in at 5'-2"; Kiley Jarrett is a towering 5'-4".  Both players are quick, and are the most natural choices to defend each other.  The biggest difference between the two is that Jarrett plays far more minutes per game.  (In the MAC championship, she played all 40 minutes against Bowling Green.)  Jarrett is also a senior.  It'll be a matchup of experience vs. energy, as Bass will get more time to rest and recover throughout the game.  If Bass keeps her composure and plays the type of man defense she's capable of, Jarrett will have a difficult time finding clean running and passing lanes.

Ball State loves the three-ball, but Bjorklund is the most natural three-point shooter in the game.  The question will be whether we see good-Bjorklund or bad-Bjorklund.  She's had phenomenal games that have converted blowout losses to incredible wins, and she's had the opposite.  In the SEC tournament, the first-round goose egg was followed by an MVP performance.  Which will we get in the opening round?

Yes, this is wild speculation.  I can't reliably tell you who's going to match up in this game, but these two are the most natural to defend each other on paper.  Unfortunately for Ball State, the 5'-9" Green yields a lot of height to Johnson.  Since Glory prefers straight-up play over head fakes and ball fakes, this is an advantage for UT.  The question will be if Green has the speed to stay in front of Johnson (and vice versa!) and if the help will be there when Johnson drives.

Seriously, the redshirt freshman faces nobody.  The closest in size to Cain is 6'-3" Amber Clark, a freshman who usually gets fewer than 10 minutes a game.  Most of the time, Cain will likely be defended by Danielle Gratton, the 6'-1" starting forward.  That's a 5-inch height difference in the paint; given how Cain has played over the last couple of months, that's almost criminally unfair.

The only real question with Cain will be her knee.  She's had nearly two full weeks to recover from the NCAA tournament and no reports have come out suggesting that she won't be ready.  The knee, however, is a constant source of concern and will be worth keeping in mind.

The matchups dictate this one.  Ball State needs to keep the game fast and on the perimeter.  Since the Lady Vols will usually run man defense, the Ball State players will almost always be guarded by taller players.  They will need to run a lot of screens and simply keep their players moving in order to find open looks.  Their main interior player (Gratton) shoots as many (or more!) threes as anybody on the team, so don't expect to see much jockeying for position in the middle.  Rather, look for Ball State to dare UT's interior defenders out to the perimeter to open up the dribbling lanes.

When on defense, they must look to jump the passes and keep the Lady Vols off-balance; once the ball is in the interior, Ball State is hopelessly outmatched.  A fast transition game would favor Ball State, and they may elect  to try their luck at a full-court press early to see if they can get the Lady Vols off-track.  In the halfcourt game, Ball State's best chances lie in turnovers.

Like Ball State, it's a tale of the tape.  Tennessee has two players under 6 feet tall (Bass and Smallbone), and 4 available players who are at least as tall as Ball State's tallest player.  Additionally, the UT interior game has been getting very good lately.  Cain leads the way, with Fuller, Brewer, and Johnson providing ample support.  At the perimeter, Summitt has several options available to her.  The trick will be to figure out which players are making the smart plays.  UT does not have to outmatch Ball State on the perimeter; they merely have to not screw up.  If they make a habit of getting the ball inside, Ball State will be forced to collapse the defense and allow some open looks outside the arc.

On defense, UT must play with energy.  The Lady Vols' rotation is far deeper than Ball State's, so there is absolutely no reason for the good gals to conserve energy.  It's a perimeter game, so there should be no need to provide backup support in the interior.  I would expect the center to be left inside - even if the Cardinals move all five players outside - to discourage any dribble drives and layup chances.

The Lady Vols can take chances with a full-court press.  With players like Cain and Fuller available to defend the inbounder, Ball State might have a difficult time getting the initial pass in.  If the pass gets in, then they can always hustle back to the halfcourt and play their normal game; Ball State will not be able to reliably exploit the fast breaks that come when a press is broken unless the Lady Vols fall asleep on defense.

There is absolutely no reason that the Lady Vols shouldn't outrebound Ball State by a large margin.  UT is much taller, much more physical, and will be playing more in the interior than Ball State - especially when Ball State is on offense.  The turnover ratio in this game should be in the 2-1 to 3-1 range, and should be enough to assure a Lady Vols victory.

A hot three-point shooting team is always a concern, and the fortunes of the game may be changed if Ball State can break 40% from the exterior.  However, there are simply too many favorable matchups for the Lady Vols.  I expect a solid Lady Vols victory by a 15-point margin.