Something's happened to the Tennessee Volunteers mens basketball team. It seems like we fans have been waiting all season, anticipating this moment when everything would finally come together for more than just one isolated game. But up until now, every time we thought we'd flipped the switch, something would short circuit.

Sure, tonight's 86-70 win over the South Carolina Gamecocks caps only a three-game winning streak, but you know what? Two of those wins have come against Florida in Gainesville and in the house of the only other team vying for the lead in the SEC East.

And really, it's about more than just the wins, isn't it? Something's different. Something's finally clicked with this team. The last component of the machine has been installed, and we finally get to fire it up at full speed and see what she can do.

Maybe we underestimated the importance of J.P. Prince to this team. Pajamas' gangly, alienesque moves open up the Vols' halfcourt offense like nothing else. He finds spots, penetrates that invisible fence around the perimeter, gets the ball to the playmakers, and magically appears at just the right time and height to clean up and put back any messes or misses. Tyler Smith continues to consistently impress, and Wayne Chism and Brian Williams are beginning to show consistency as well, using both their brawn down low in the crowd and their agility up high in space. Our guards are still seeking every game consistency, but they are beginning to play well enough to beat some teams with their perimeter shots and to help win games by presenting at the least an outside threat that must be defended.

Tonight, the game was for the top of the hill in the SEC East, and both teams came out gunning for supremacy. The pace was fast, furious, and fun, and both teams were hitting high percentages both from the field and from behind the money line. 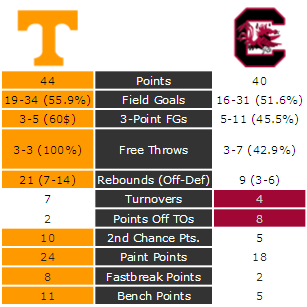 I just now realized it, but one of the things that contributed to this great win was that Tennessee had no periods of lapsed focus. They played well in the first half and came out and simply dominated the second, both on offense and on defense. 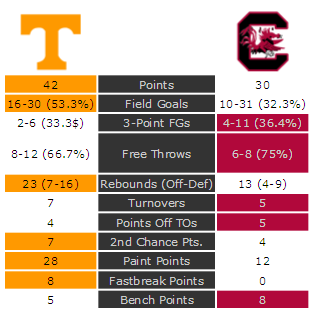 After the break, Tennessee picked up where they left off on offense and simply picked up on defense, holding South Carolina to a mere 30 points and Danger Guard Devan Downey to a single free throw and a meaningless three-pointer as time expired to make the margin of defeat 16 rather than 19.

I can't really pinpoint exactly what it is, but Bruce Pearl has finally found the right switch to flip, and something has clicked with this team. They've turned the proverbial corner, and they've done so at 80 miles an hour. They're making the last adjustments to correct the fishtail, and they're now barrelling straight toward the NCAA Tournament.