The Week That Changed Everything: Tennessee Sports Caught a Wave

Share All sharing options for: The Week That Changed Everything: Tennessee Sports Caught a Wave

We have been waiting for the last seven days to arrive for a long, long time.  The funny thing is, we didn't know they were here until they already happened.

When you follow sports - no matter which sport or which team - you're bound to ride some ups and downs.  Sometimes the ups last much longer (as with the Lady Vols), and sometimes the downs never seem to end (as with last season's football offense).  But the roller coaster is always running, and we're simply along for the ride. 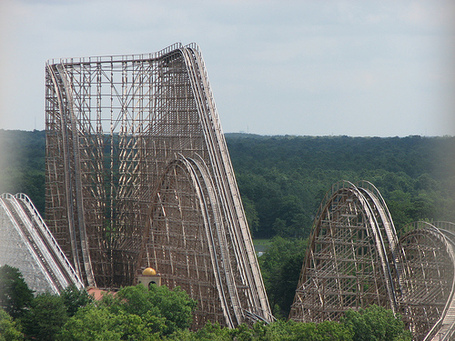 But sometimes you get a chance to peek back at the track behind you and ask yourself, "What did I just go through?"  And sometimes, whatever it was, it was great.

The men's team got the earliest jump on the wave, starting with an 81-76 win over Mississippi State.  Heading into the game, the situation was:

In short, the situation was a mess.  We were considering the very real possibility of missing the NCAA tournament and comparing our resume to those of Mississippi State and Vanderbilt.

The Lady Vols were experience the same story as the men.  On February 19th, they lost to Kentucky in Rupp as well, severely damaging their chances at a bye in the SEC tournament and opening the door for consideration of a sub-8 seed in the NCAA tournament.  A few observations about the Ladies:

Though football may be in the offseason, there is no offseason for the football fans.  Still hanging on to every piece of recruiting news of the '09 class, UT led the NCAA with post-NSD recruiting drama.  We were uniquely set with three top-ranked recruits as potential signees.  But,

The men's basketball team has won three in a row - including the away games against Florida and South Carolina.  Kentucky, meanwhile, has fallen apart, which now leaves UT as the E1 seed in the SEC tournament.  The team has begun to play like a team, and the high-energy fun boys of Bruce are emerging from their cocoon.

The Lady Vols, while dropping a close contest to LSU in Baton Rouge, are showing signs of team growth as well.  Players have begun to realize that they were not fitting Pat Summitt's creed of selflessness, and Shekinna Stricklen apologized for not accepting her role.  (Aside:  Stricklen was asked to play point to provide leadership on offense, though her natural position is more of a forward.  It took her a while to accept the change, but she was probably the MVP against Alabama.)  But the team played a terrific game against Vanderbilt and, despite a slow start, has won their first tournament game.

The football team has their share of good news as well.  Following Junior Day, the news on the recruiting front caan only be interpreted as good.  One of our key recruits for '10 - Jacques Smith - is heavily recruiting other key players on behalf of UT.  The staff took Holly's signature advice and went shirtless for the juniors - a move that made Alabama look "boring" in comparison.  And on the heels of last night's EPIC WINs for both baskteball squads, the football team finally received the signature from David Oku.  The addition of Oku alone secures a top-15 recruiting class for UT in both the Scout and Rivals rankings - a great resume line for a staff with only 4 months of total time on the job (and significantly less time for most of the staff).

What's the next turn?

The roller coaster is still rolling forward.  Orson Charles will announce today.  Bryce Brown is still in play, even after Oku's commitment (and maybe more so because of Oku).  There's plenty of track ahead of us in a ride that feels much like Space Mountain with the lights off.  But for now, we get a chance to peek back and see just how crazy good the last few turns have been.

Sometimes, it really is great to be a Tennessee Vol!