Anatomy of an Anticipated Storyline

Share All sharing options for: Anatomy of an Anticipated Storyline

UPDATE:  Wiz has updated his original post to point out that the man in question is Lane and the blonde in question is indeed Layla.  He also very graciously cites this post.  A hearty hat tip to the Wiz, who was undoubtedly time-constrained or he would have sleuthed it all out himself.

It's incredibly refreshing to know that there are people out there who are simply interested in finding facts.  [Note by hooper, 04/13/09 8:44 PM EDT ]

Or:  LANE KIFFIN IS A DRUNKEN WOMANIZER!!!!1

Expectation can be a dangerous thing.  We all live by expectations, like the sun rises in the east and sets in the west, or when the light turns green, the cross-traffic will cease driving through the intersection.  A problem arises, however, when we begin to assume the expectations even if all evidence tells us that the expectation no longer holds.  When that swervy-driving car is clearly driving waaay too fast to actually stop for the red light, perhaps it would be wiser to ignore the expectation of a clear intersection and let the drunken bozo through.

Take the case of The Wiz of Odds.  This morning, my feed reader was graced with the headline, Why, I Think That's a Football Coach in the Corner, which contains this text in its entirety:

The Tennessee site Losers With Socks has posted a grainy image likely taken with a cell phone camera of what appears to be a Southeastern Conference coach enjoying himself while out on the town.

One person commenting on LWS writes: "Little Laney out drankin' with young co-eds while his Wifey is at home taking care of his infant Son. Terrible."

A photo is included (though a better image is on the LWS link).  So between the photo and the commentary provided, the gut reaction is scandal.

At least, that's the expectation.

Digging a little further, the photo is a little less indicting: 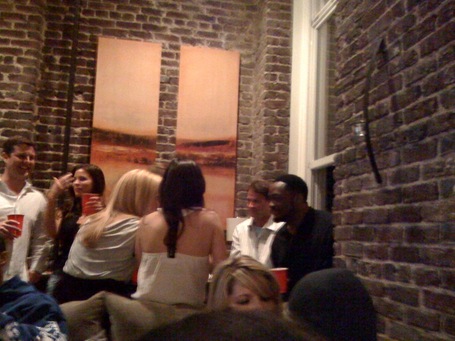 Originally posted on Losers With Socks

After staring at it for a bit, you do confirm to yourself that the guy in the white shirt in the corner of the room (the middle guy of the 3 in this picture) does look much like Lane Kiffin.  (In fact, I'm rather certain it is.)  So now "Little Laney" is enjoying a Red Solo Cup and the company of coeds - scandalous.  But what else does that picture tell you?

So despite the initial Lane Kiffin drinkin' it up with coeds! reaction that we first had, it sure looks a lot like a dinner at a restaurant following a convention - much like any white-collar convention sees all the time.  I've been to them, as I'm sure many of you have.  The only difference is that I'm not so famous as to have people snapping my photo with their cell phone.  As to the matter of that comment on LWS that The Wiz referenced...

The guy who left the "Little Laney" comment  uses the handle LL.  (By the way, guess his favorite team.)  A five minute search through the comment threads on LWS shows that LL comments almost exclusively on threads involving the Florida Gators.  Further, his comments are almost exclusively contrary to the views of the LWS Vol fan writers.  Much of his more recent comments are in these posts, if you're really interested in fact-checking:

I'm working on assumptions just as much as Wiz, but it sure seems to me that the implication of a wild and crazy night out was a whole lot of nothing exacerbated by typical rival sniping.  But hey, it's Lane Kiffin and the most sensational theme just has to be the right one, right?  Or at least, it's enough to write on to get a few quick hits.