I'm All Out Of Bubblegum

Share All sharing options for: I'm All Out Of Bubblegum

Joel pointed out earlier that Urban Meyer's rhetoric has turned a little nasty - and that toward his own fan base.  First, he very directly explains that fans and former players have absolutely no business criticising him, his program, or his players.  (He also takes shots at the NFL, asking how dare they hold character questions against Harvin, or how dare they suggest that Tebow might be better suited to be something besides a quarterback.)  Then, he tells his fans that, in order for them to be a part of the club, they have to be good enough, elite enough.  After all, being a Gator is a clique, like in junior high and high school.  Only the really cool kids with two iPhones and a Lexus are allowed, I guess.

Now, that may sound a little harsh, but you have to consider that this didn't come out of a vacuum.  No, Urban is smart.  This is simply an advanced phase in the 4-year conditioning program that began when Tebow hit the scene.  By the time Tebow leaves, Meyer will have complete control over the Gator fanbase.  They'll follow his every word and stand by at his beck and call.  He's been working them over for years now and it's been right before our very eyes.

Am I sounding a little conspiratorial and crazy?  Well, you'll understand once you see what I now see.  Here, take these sunglasses to Ben Hill Griffin and take a look for yourself... 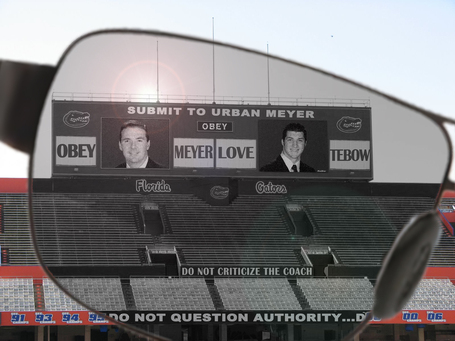