The 50 Best Games of the Fulmer Era - #17: The Perfect Fourth Quarter

Share All sharing options for: The 50 Best Games of the Fulmer Era - #17: The Perfect Fourth Quarter

I'll give you the numbers, you guess the game.

The team with the number one defense in the nation and ranked in the top ten, playing at home, holds the opposition to 79 yards of total offense in the game's first 25 minutes.  Meanwhile, their own offense compiles 201 yards in that same timespan, scores 17 points and gets an additional 7 from their special teams.  They will have a three possession lead in the final minute of the first half.

In the second half, they will score a second special teams touchdown.  They will average 5.4 yards per carry for the entire game and score 33 points.  Their quarterback will eventually become the number one pick in the NFL Draft.  They will be playing for their sixth victory in seven years against the opposition.

And they will lose by 18 points.

When you look at the final score of this game, it doesn't seem like it belongs on this list, especially not up here at #17.  But when you consider the moment, the rivalry, and the fact that we may live our entire lives and never see a fourth quarter as perfectly played by one team as this one...this game lives on as one of the most enjoyable nights in Tennessee Football history. 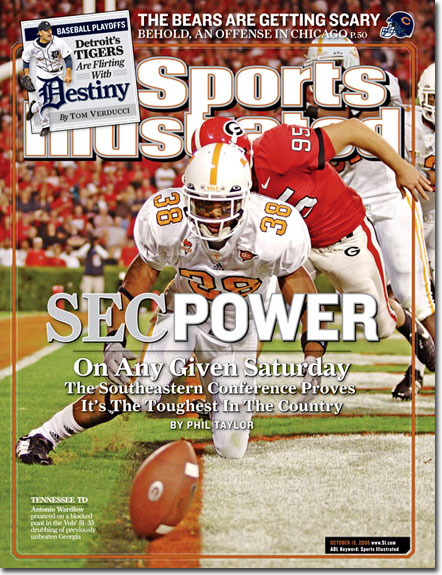 The Vols put the bad dreams of the 2005 season to bed in the opener against Cal, but the nailbiter against Air Force followed by a one point loss to (eventual National Champion) Florida put a damper on things.  Beating Marshall and Memphis didn't really prove much, so the jury was still out on the '06 Vols when they went to Athens to face the Dawgs.

Georgia had looked ugly on offense - 18 points against South Carolina, 14 against Colorado and Ole Miss - but won all of them, 5-0 heading into this one and sporting the nation's best statistical defense.  And at this point, Tennessee's only win of the decade against the Dawgs was in 2004, giving Georgia a definitive edge in this rivalry.

So when UGA took a 10-7 lead, then ran a punt back for a touchdown, then scored again with less than five minutes to play in the first half to go up 24-7, it appeared that Georgia's defense was as good as advertised, the offense had finally woken up with Joe Tereshinski under center, and Tennessee was still, in fact, going to struggle.

Credit the Vols first for putting together a sensational touchdown drive to close the first half, narrowing the gap to 24-14 in the final minute of the second quarter.  As the second half began, the Vols needed a break of their own early to continue the momentum.

They got it on the second play from scrimmage, as Antwan Stewart intercepted a battled ball at the Georgia 19 yard line.  Erik Ainge would sneak it in a few plays later, and immediately the Vols were right back in the fight down only three points.

Tereshinski's good fortune in the first half continued to turn sour, again giving the Vols excellent field position for the second time in the third quarter with an interception on the third play of Georgia's next drive.  This left the Vols knocking on the door as the game moved to the fourth quarter.

The entire second half is good - only one punt by either team - but in the final fifteen minutes, Tennessee was one busted kick coverage away from doing absolutely everything right.  And even a second special teams touchdown for Georgia couldn't take away from the onslaught that was to come.

The Vols took their first lead since it was 7-3 in the first minute of the fourth quarter, as Robert Meachem (7 catches, 98 yards) somehow got wide open in the back corner of the end zone, and Erik Ainge found him to put Tennessee ahead 31-27.

Tennessee's kick coverage was at their best before they were at their worst, stuffing Georgia back at their own five yard line in a textbook example of why you run north and south.  The Dawgs went nowhere from there, and then in the blink of an eye, the Vols assumed full command:

Antonio Wardlow made the play and the cover of Sports Illustrated, and the Vols had a 38-27 lead.  Before we could celebrate too much, Thomas Brown took the kickoff back 99 yards and put the Dawgs back in it, 38-33, with still a ton of time left in the fourth quarter.

That's when Erik Ainge put even more distance between his 2005 and 2006 seasons.  After a great kickoff return of their own from LaMarcus Coker, the Vols went 8 plays in 55 yards thanks to timely throws from Ainge.  Arian Foster punched it in from a yard out, and the Vols went back in front two possessions at 44-33.  Tereshinski put his night to bed with a fumble on Georgia's next drive, and though the Vols had enough points, Ainge went back to work:  9 plays, 44 yards, another one yard touchdown run from Arian Foster, and a 51-33 lead.  The Vols swung the scoring by 21 points in eleven minutes.  Ainge finished the night 25 of 38 for 268 yards, 3 TDs and 0 INTs.  Mark Richt credited the Vol offensive line for giving him "four, five, sometimes I counted six seconds he had back there to throw."

As Matthew Stafford came in with the game out of reach, the Vols ended the night with another interception, then ran out the clock.  What had looked like a Georgia blowout and more frustration for the Vols in the final minute of the first half turned into a dominant Tennessee victory that paved the way for a 7-1 start before Erik Ainge hurt his ankle and the Vols lost a heartbreaker to LSU.