The Roster By Numbers (Which Should Not Have Been This Hard)

Share All sharing options for: The Roster By Numbers (Which Should Not Have Been This Hard)

So now that I have a little bit of time to breathe and relax, I can finally get around to doing some of the nerdy analysis I've been putting off.  First up is a look at the roster to see how it breaks down in terms of experience and turnover.  We all know some of the more position-specific details, such as the huge gap in quarterbacks on the roster and the imminent dismantling of the O-line after 2009.  I started thinking, however, about how the team looked as a whole and realized I didn't have a clean picture of it all.  That led me to look at the roster year-by-year to see how things might look as players graduate and future recruiting classes come in.

We start with a rant:

Is it really so difficult for somebody to keep an up-to-date list of remaining player eligibility handy?  UTSports?  Scout?  Rivals?  Anybody?  Seriously, this better not be hidden behind paywalls...

Ah, better.  In all seriousness, it took me far longer than it should have to cobble together a full roster for the football team that accounted for the year that each player showed up on campus and how many years of eligibility they had left.  After having to manually sift through to account for redshirts, JUCO reinstatements,  military academy transfers, and inconsistent roster lists, I can't guarantee that this is 100% accurate.  But it's close enough to get some good observations.

First, if you were to assume that nobody had left the roster and ignored scholarship limits, here is the maximum possible size of the team at this point in time:

For this to have happened, nobody in 2005 would have graduated, left for the NFL, or not redshirted.  The numbers may also look slightly different than lists on Scout or Rivals because I actually took the time to weed out the players that were listed under multiple incoming classes.  (In most cases, I assigned them to the older class to account for their years at JUCO programs.  See, for example, Darius Myers in 2005 and 2006.)  Also, "roster" are those listed at UTSports as on the roster, "squad" are practice squad players, and "incoming" are the freshmen who did not show up on campus for spring training.  This includes Mike Rozier.

Now, here are those who have either left the program or have been dismissed since Kiffin took over: 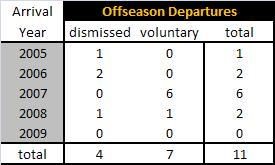 It doesn't surprise me that the '05-'06 players didn't depart, since they wouldn't be able to play anywhere else.  Likewise, the '08 players must believe that the new staff will work out in their favor and that they have a chance to play ahead of the '07 class.  The '07 class has borne the brunt of the attrition, though there may yet be more to this than we see immediately.

And now, the roster as it stands today (with the most recent accounting being the departure of Tyler Maples.

The squad and incoming numbers are unchanged (and provided only for completeness), so focus on the roster column.  Yes, there are 16 players on the roster from the 2005 class.  You'll note that this does not add up to the difference between the maximum roster size and the transitional departures.  The discrepancy is:

It's not surprising that 2005 has the greatest attrition.  Much of that is graduation, after all.  What's surprising is that the 2005 losses aren't greater.  From the '05 class, redshirting was more than twice as prevalent than playing for all four years.  However, 9 of the 55 total players who came into UT from '06 to '09 have left for non-graduation and non-Kiffin reasons - or more than 16% of the roster from that time.  Reasons range from being dismissed by Fulmer to not making it onto campus at all.  I don't have a feel for how that compares to other programs, but untuitively it's uncomfortably high for my taste.

Here are the numbers based on who plays for offense, defense and special teams. 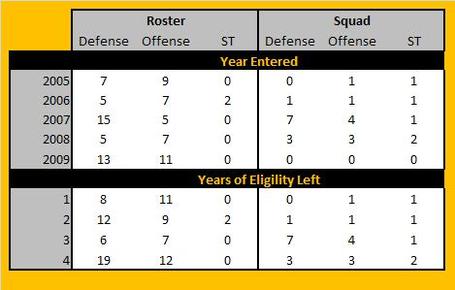 What becomes increasingly obvious is that the roster is very imbalanced.  The '05-'06 numbers look pretty even, but they're actually dominated on the offensive side by quarterbacks and linemen (but you already knew that).  The 2007 class is extremely defense-heavy, and the 2008 class is very light across the board.  The general chatter I hear on the airwaves and MSM circles tends to focus on the loss of offensive linemen after next year as the trouble spot; unlike rebuilding projects at many other places recently, this looks to have a 2-year lurch because of the difficulty of finding offensive linemen who can play effectively as freshman.

However, I think we haven't paid much attention to that glut in 2007.  Looking past Eric Berry, there are actually a lot of defensive players that will be lost in one to three years.  2007 is the class that includes Eric Berry, Ben Martin, Dennis Rogan, Rae Sykes, Chris Walker, and Gerald WIlliams.  If others like Brent Vinson and Savion Frazier shine, we could see over half the defensive roster turn over in one year.

Defensively, the transition should work alright; 2009 brought in a lot of great defensive back prospects, and the 2010 and 2011 classes look to be headed in the right direction for the front seven.  Offensively, this staff must find a way to strike gold in 2010.  They'll have a terrific selling point: there are hardly any offensive players left on the roster after next year. 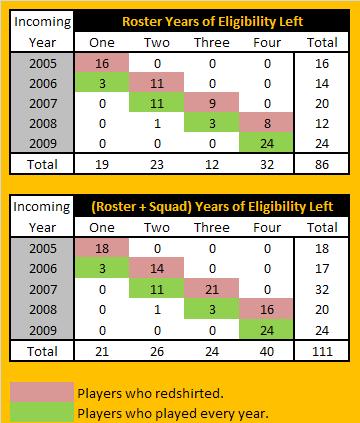 In these charts, first read by row.  For example, you would want to look at the number of redshirted 2006 players in comparison to the number of non-redshirted 2006 players.  In doing that, you'll get a feel of how many players have already sat out one season.  In 2006-2007, there were 51 redshirters compared to 17 non-redshirters - a 3:1 ratio.  Again, I don't know offhand how that compares nationally, but I would suspect that's one of the highest ratios you'll find.

You'll note that I used the numbers that include the practice squad for that ratio.  I didn't do that to inflate the ratio (which it did) but rather because of the class of 2007.  That class, which was ranked 3rd by Rivals and 4th by Scout, still has a third of its players on the practice squad.  Let that sink in for a second.  Of a class of 32 players, 12 of them have not lettered.  7 were naturally grayshirts, who I've lumped as redshirts for convenience, but that really doesn't do a whole lot to justify the high ranking of our '07 class in my mind.  In fact, if you don't look at the practice squad, 2007 is the one year where more players played as freshmen than redshirted.  The squad size from 2007 so badly skews that year's data that it should raise flags all over the place in our minds.  In fact, looking back at the list of departures since Kiffin took over, there's not a whole lot of good news about the 2007 class as a whole.  For all its gems, I the 2007 class is either artificially represented in the recruiting databases or has been significantly underutilized.  Or both.

Reading by column, you'll note the huge old "40" staring back at us.  (Or 32 if you don't count the practice squad.)  Before we get too excited about the youth of the team, let's keep in mind that we don't know who will redshirt out of the incoming class.  That 40/32 should decrease by a few.  Also, there is reason to believe that several players with two years of eligibility may not return after 2009.  One is Eric Berry, who has millions of dollars waiting for him.  But others are 2006 redshirt players (14 total, 11 non-redshirt), of whom many may graduate or decide to head for the NFL draft.  And other juniors may have a stellar year and find that declaring early for the NFL draft is the right decision for them.

Oh, and that lonely little "1" sitting all by itself from 2008 with 2 years of eligibility?  Do I really need to say more than that it's Brandon Warren?  Yes, technically he's a 2007 guy, but given how last year went, including him in UT's 2008 class made more sense to me.  I mean, it was as close to a redshirt year as he could have gotten without actually redshirting.  Besides, it's only fitting that Warren would find one more way to display the number 1.  (See photo above.)