RTT's Create Your Own UT Uniform Contest - And The Winner Is...

Share All sharing options for: RTT's Create Your Own UT Uniform Contest - And The Winner Is...

Many thanks again to all who participated and voted in our Create Your Own Uniform Contest using EA Sports TeamBuilder software for NCAA Football 10, which hits stores today. Our voting among eleven finalists showed a fair amount of interest across the board, with eight unis receiving at least 20 votes.

But the big winners today are devildogutk...and tradition. 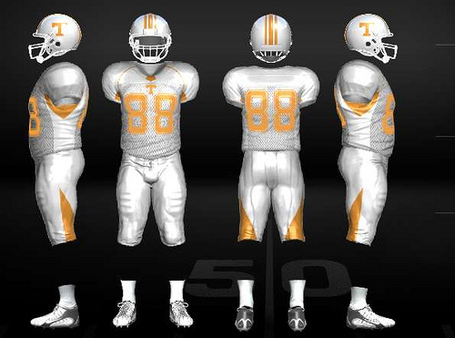 With almost all the other entrants going with black as a primary color, devildogutk's subtle enhancements to the road whites - including a return to the early 90's orange outlined numerals - won the majority over. This uniform also included the popular (and perhaps adidas inspired) tri-stripe helmet, and carries that "fast" look. Well done.

20% of the vote went to devildogutk, giving him the honors and his choice of Meat Market by Bruce Feldman, or the Rocky Top Tennessee 2009 annual. The race for second place was much tighter, with checkerboard pants in a dead heat with black unis. In the end, kidbourbon had the most popular of the black uniforms and takes home second place with 13% of the vote: 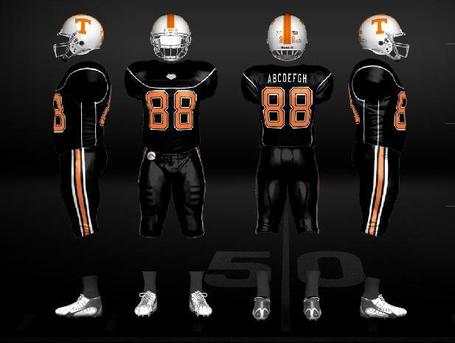 Thanks again to all who participated - winners can email Joel at rockytoptalk@gmail.com with your contact information to get your prizes sent to you. Having witnessed the power of tradition with a no-black entry winning, while still realizing that 80% of you did vote for an alternate uni with some black in it, we thought we'd try and narrow down what you're really after...