Last May, Inmate 944466 of the Florida Department of Corrections walked out of a Florida penitentiary a free man once again after serving a 1 year and three month sentence. This is the not the first time he has felt this feeling of new found freedom, for Inmate 944466 has lead a tumultuous life that squandered what could have turned out to be one of the most promising careers in NFL history. Such is the story of Tony Robinson.

Kevin Altona "Tony" Robinson took the reins of the Volunteers offense in 1984 after Alan Cockrell was drafted in the first round of the MLB amateur draft by the San Francisco Giants, following a 30 – 23 win in the Citrus Bowl over Maryland the previous year.

During the 1984 season, Tony led the Volunteers to a 7-3-1 regular season, including a 4th quarter comeback win (28 – 27) against the Crimson Tide and a disappointing 12 – 17 loss to the Kentucky Wildcats. The loss to Kentucky would mark the last time the Wildcats have beaten the Vols.  That year the Vols would again see the Maryland Terrapins in a bowl game, but this time in the Sun Bowl.

The 1984 Sun Bowl would go on to be arguably one of the best games in Sun Bowl history. Tony Robinson led the Vols to an early 21 – 0 lead at halftime, thanks to a TD by tailback by Johnnie Jones, 2 field goals by kicker Fuad Reveiz (24, 52 yds respectively), and a TD pass to Tim McGee. However, Maryland pulled off a comeback that rivaled their 42 – 40 win earlier in the season over the previous year’s national champs – Miami Hurricanes – by rattling off 22 points in the third quarter, including a  rambling 57 yd TD by tailback Tommy Neal and a 40 yd TD pass. The lead would not last long, however, as on the ensuing kickoff the Volunteer’s Pete Panuska returned the ball 100 yards for a touchdown and the go-ahead score. With 8:03 left in the fourth, the Terps' offense pounded out a 5-minute, 5-second drive that culminated when Rick Badjanek powered himself into the endzone on a 1 yard run, putting the Terps up once again 28 - 27. With under 3 minutes to play, the ball was in Tony’s hands. As Tony drove down the field, it looked as if the Vols would be in place for a last-minute field goal, however Maryland defensive back Keeta Covington had other things in mind and was able to jar the ball out of Tony’s hands, giving Maryland the ball and ensuring their 28 – 27 victory.

While the 1984 season ended in disappointment, the 1985 Volunteers fought their way into history as one of the most storied and beloved teams for Vols fans. The 1985 season started off innocuous enough with a 26 – 26 tie to UCLA, but it would be the second game of the season against Auburn that most Vols fans would remember about Tony Robinson, and one that Johnny Majors would call "one of the sweetest victories of his career". Auburn rode into Knoxville with the country’s No. 1 ranking and having won the last three meetings against currently un-ranked Tennessee, due in part to their star running back and eventually that year’s Heisman winner, Bo Jackson. Not far behind them was Sports Illustrated, who had followed Bo and the Tigers to Knoxville expecting to use Auburn’s star back for next month’s cover. When the dust settled, however, Auburn left Knoxville with a 38 – 20 loss, and Tony Robinson vaulted himself over Bo and straight onto October’s cover of Sports Illustrated. The cover read "The Tennessee Waltz: Tony Robinson Buries Auburn" and prominently featured Robinson.  ["The Vols Had a Ball" - Original SI story]. Robinson finished out the day with a staggering 259 yards and four touchdowns, with McGee contributing six catches for 163 yards and one score in the Vols’ unstoppable aerial attack. Bo, who seemed to never get past the line of scrimmage, left the day with only 80 yards on 17 touches, with 51 of the yards coming in the second half. The win over Auburn marked the first time the Volunteers had beaten a No. 1 ranked team since 1959. 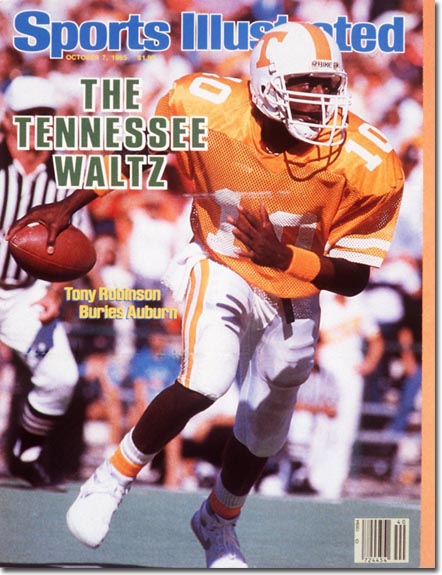 The following two weeks, Tennessee squeaked out a win over Wake Forest, and on the first road trip of the year, was handed their first and only loss of the season against No. 7 ranked Florida in a close 17 – 10 matchup. The following week found the Volunteers on the road again at Bryant –Denny Stadium and in a pivotal moment. On the first snap of the 4th quarter and leading 13 – 7, disaster struck.  While scrambling in the backfield, Tony was sacked and hit by two Alabama defensive linemen, Cornelius Bennett and Curt Jarvis, tearing his ACL and ending his season.

It would be the last time Tony Robinson played football for the Tennessee Volunteers.

Backup Daryl Dickey would go on to lead the Vols in a 16 – 14 victory, thanks to a crucial Dale Jones interception at midfield thrown by Mike Shula. The Vols that year would go on to win the rest of their games (save for a 6 – 6 tie against Georgia Tech), the SEC Championship and capped the season with a 35 – 7 victory in the Sugar Bowl against Vinny Testaverde and the #1 ranked Miami Hurricanes.

In his short but remarkable career at Tennessee, Tony Robinson amassed 3,332 passing yards (currently ranked 12th all-time at Tennessee), 23 TDs, and completing 253 passes on 411 attempts (61.6 %, T-3). Tim McGee would go on to be drafted by the Cincinnati Bengals in the first round, 21st overall. Tony, on the other hand, would find himself behind bars on drug charges, and after pleading no-contest to lesser offenses, he received 90 days in jail and 6 years probation.  Despite his first round projection, he would go undrafted.

Although never drafted by the NFL, Tony did live out his dream of an NFL career for one night on October 19, 1987. 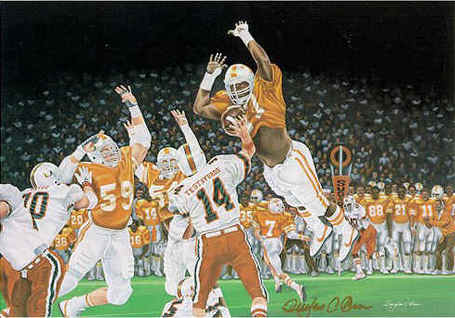 Robinson was digging holes for fire hydrants in Richmond during the 1987 NFL players’ strike when he got the call. The Washington Redskins negotiated to have Robinson released from a Tennessee jail until the strike ended. His NFL debut came on Monday night against Redskins rivals the Dallas Cowboys, when Redskin starter, Ed Ruppert, was injured after the first two plays of the game. That night, Tony led the Redskins in an improbably 13 – 7 victory over the Cowboys, who featured a number of professional players that had already crossed the picket line, completing 11 of 18 (61%) of his passes, 152 yds, 2 INT and converting 19 first downs (QB rating 48.6) . It would be a one-game career for Tony Robinson, as the following week he would be passed over for Jay Schroeder, and then sent back to Tennessee when the player’s union finally crossed the picket line. When it comes to quarterbacks in the NFL with one game careers, Tony Robinson still ranks near the top.

Over the years, he has been in an out of jail serving 2 years of a 6 year  sentence in Tennessee from 1991 – 1993 on cocaine and forgery charges, and serving various 1 year sentences on cocaine charges in Florida between 2002 and 2008. There was talk of playing for the Tennessee Generals , a minor-league football team outside of Nashville, and for the Arena Football League in 2000. There were plans to return to the University of Tennessee to finish his mechanical engineering degree. Maybe he would work  work with his brother in Tallahassee selling caskets. Coming and going, most of his plans were cut short by more stints in jail.

Joey Clinkscales, a University of Tennessee wide receiver and drafted to the Steelers in 1986, remembers the skill and promise that Tony Robinson exhibited, "[w]e were standing along the track at midfield. Robinson picked up a football and hit the goal post in one throw, he said he was going to do it before he threw the ball, I've never seen anybody who could throw the ball like Tony Robinson." Former UT Offensive Coordinator Walt Harris said that Robinson was the best quarterback he ever coached, with Hall of Fame potential.

Tony Robinson will always be remembered in Tennessee football legend for his extraordinary arm, for his ability to make plays using his legs, for how he revolutionized the quarterback position, and for beginning what was one of the most exciting and praised seasons of Volunteer football. Tony Robinson will always remember the roar of the crowd at Neyland, that fateful day against Alabama, and a fleeting night in Robert F. Kennedy Memorial Stadium. 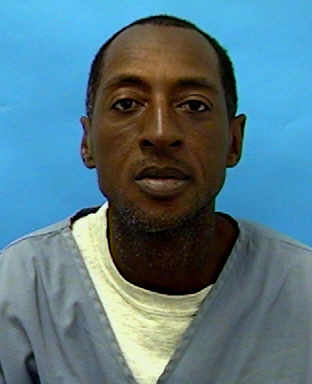 Author's notes: I wrote this story after reading about Tony's single game with the Redskins in 1987 at bleacherreport.com. Being born in '85 myself, I researched all of this using various sources - a couple of Sports Illustrated articles, Dept of Corrections information from Florida and Tennessee, and a couple other blogs and first hand accounts about the '84 - '85 seasons. As Tony Robinson's story began to reveal itself, I felt compelled to share it with you all. I hope some of you learned something new you didn't know, or remembered some of the more interesting parts of Tennessee history that you may have forgotten. I know, for me, it was an interesting travel back in time and a great learning experience.