Recruiting Tuesday: Much Ado About Quarterbacks

Share All sharing options for: Recruiting Tuesday: Much Ado About Quarterbacks

UPDATE:  Markeith Ambles is now updated to a Tennessee COMMIT!  Boy, it felt good to delete the "appears to be leaning toward the Gators" phrase out of his description.  -hooper

Does it seem to you like it's only been 5 days since Jesse Scroggins went domestic and committed to his hometown Trojans?  To me, it feels like it's been a couple of weeks already, what with all the activity surrounding SEC Media Days.

And perhaps even more helpful has been the commitment of Nick Lamaison, who fills the huge gap in what would have normally been the 2009 recruiting class.  With Lamaison - a very highly regarded JC player - year 2010 and particularly year 2011 are much less uncertain.

Sure, Lamaison doesn't fill the 2010 void that we're all waiting on, but we seem to be handling rejection quite nicely as our eyes have mostly turned towards Tyler Bray.  Bray, a 6'-6" beanstalk who needs to gain a lot of weight, surprised a lot of people at the Elite 11 camp and has suddenly jumped into the conversation as one of the pro-style prospects to watch.  If he gets to around 210 lbs by the end of his senior season and has a standout year, he may turn out to be one of the highest prospects of the year.  And UT seems to have turned their sights on him right now.

More on individual players in a second.  But first, the board:

Some of the removals were commits from weeks previous, but I have removed their markers from the board.  On that note, do notice that there are far more prospect markers on the board than UT could possibly take in.  That means that you'll see more players go elsewhere than to UT; don't let the math worry you.  Unless we end up with a class of 3.  Then we can worry.

I have also eliminated quarterbacks who have committed elsewhere.  It's very rare for quarterbacks to change because they become a part of the recruiting process and begin to have a vested interest in their first team of choice.  The only feasible way UT can flip a quarterback is to have such a stellar offense this year that they become convinced that Lane's offense is the one for them.  (If we have that great of a year, remind me and I may consider putting other schools' prospects back up.  But until then, they're gone.)

When Lamaison committed, the GVX knives came out quickly to inform us that JC quarterbacks don't belong in the SEC.  I'm not going to assert that Lamaison will be the second coming of Peyton or anything, but I would like to point out a couple things about Lamaison.  First, his mechanics are sharp.  (As a freshman, he was a JC All-American.)  Second, he's exiting the JC system a year early.  To do that, you have to have enough coursework knocked out to satisfy the academic requirements, and it takes a bright kid to pull it off.  (There's a reason nobody recruiting the top JC quarterback of his year - nobody believed he was available.)  His grades are in great shape and he learns quickly.  He also plays the system well, and was willing to wait until after Scroggins made up his delayed mind.  He at least deserves a chance to earn his reputation on his own merits, but I can list reasons to believe in the kid just as easily as Adams can list reasons to doubt.  Only my reasons have to do with Lamaison himself.

Bray is an interesting prospect.  First, if you haven't seen him, take a look at this video so you get a feel for him.  The one thing that doesn't really come across is his height - 6'-6" or 6'-7" depending on your favorite flavor of internet recruiting site.  But at less that 200 lbs, he's really thin; unless he has some massive weight gain over the next few months that magically comes in the form of well-proportioned muscular bulk, he's a certain redshirt.  The reason he's getting attention at all is that his mechanics are absolutely terrific.  He needs a bit more fine-tuning on footwork (a natural consequence of growth spurts), but there really isn't a flaw in his form.  He can throw downfield with a lot of accuracy and zip and he plays very controlled.

If Lamaison had not been signed, Bray would probably not be a good risk.  He's almost certainly going to need a year to redshirt and grow, which means that a Lamaison-less squad would have only Mike Rozier between one Nick Stephens injury and a Flying Wedge offense in 2010.  But with Lamaison aboard, there are 2 quarterbacks in place once Crompton graduates that can fill the gap between Stephens and Bray (hypothetically speaking here).  That tones down the risk quite considerably and makes a redshirt project a far better option to consider. 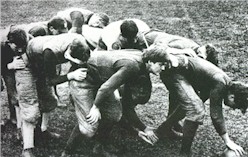 After last year, would this really be so bad?  (via www.eteamz.com)

If the staff goes after Bray, you can bet that it's because their evaluations reveal something special in him.  He's going to be a project, but he might be a project worth spending the capital on.  Besides, it's not like UT's never had success with tall, lanky ones...