Share All sharing options for: Lane Kiffin, John Calipari & The Weight of Expectation

I've been staying in Lexington for the past month, working on my master's and enjoying civilization. And it doesn't take long in the Bluegrass to figure out that people there are as passionate about UK Basketball as we are about UT Football: a certain shade of blue colors everything, and the upcoming football season seems like merely the appetizer for what everyone is really waiting for.

In such a place, there are plenty of ways to spend your hard earned money to show your support. And most of them this time of year involve John Calipari's name and/or likeness: t-shirts that say things like "CALIPARI'S CATS" or "RESPECT OUR PAST, FEAR OUR FUTURE", you know the drill.

But a few weeks ago, I saw one particular t-shirt that really caught my eye. I went back on Friday to look for it, and to my dismay couldn't locate it at several stores in the mall or at Dick's Sporting Goods. On my last stop on the way out of town, I went by Wildcat Wearhouse, and there she was: 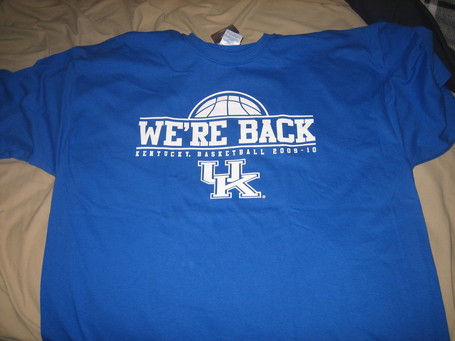 (Side note: the good people at Wildcat Wearhouse in Hamburg Place are having a buy one get one free sale, and upon hearing this my brain instantly does what one's does when you hear you're going to get something free...until I realize that there is literally nothing I want in this store. So some UK friends of mine are about to reap the benefits, times two.)

The woman behind the counter tells me that they've sold a lot of these shirts, which might account for my inability to find them anywhere else. And I merely wonder aloud if anyone sees anything wrong with this picture.

I don't care if UK fans want to build up Johnny C before he ever coaches a game in Lexington. It just makes me nervous, because I can easily envision the same shirt being sold 165 miles south in a certain shade of orange.

Two weeks ago, Tru and our friends at A Sea of Blue asked the question, "What does success look like in Calipari's first year?" They polled their substantial group of readers and asked them to define success for UK Basketball in 2009-10.

Kentucky went 22-14 last season. 8-8 in the SEC, good for a tie for fourth place in the SEC East. They did not qualify for the NCAA Tournament, lost their best player to the NBA (I did not buy one of those Jodie Meeks "WITNESS" shirts, which no doubt are equally popular), and their head coach was not retained.

And the majority of voting readers at ASOB think that success in the following season is defined by the Final Four.

Again, their fans are free to expect away. But what appears to be such an imbalance between reality and expectation to the outside eye (and really, it's not an unbiased outside eye - as a UT fan, I'm required to dislike both UK basketball and John Calipari, so adjust accordingly) makes me wonder if we have expectations of similar imbalance for Lane Kiffin and his first season.

So for us...what does success look like for Lane Kiffin in his first season? In 2009, what's a good year for Tennessee Football?

We are more similar than we'd like to admit, UT and UK fans, and it's more than just our passion. Consider:

For Calipari, the bar appears to be set astronomically - and immediately - high. I'm sure it's incredibly easy to buy into the "We're Back" mindset. Because I'm terrified of how easy it might be for us to buy into it.

"Are you really saying that Lane Kiffin might be as good of a hire as John Calipari?!"

No, of course not...because none of us know that yet.

My amusement with the t-shirt, of course, is that you can't be back when your shiny new head coach hasn't put the blue tie on yet. And when you combine that with the Final Four expectations that are based largely around a new coach and a ton of freshmen...it's going to be a hard year to be John Calipari.

I'm not saying he can't or won't do it. I'm just saying expectations might be a little unfair.

I don't think our bar is going to be quite so high - Jonathan Crompton didn't suit up for Billy Gillispie. And the Cats don't have to deal with anything similar to the 2009 Florida Gators.

But generally, our year-to-year expectations are equally high. They're part of what cost Phillip Fulmer his job. And they're part of what Lane Kiffin must answer to. What's a good year for Tennessee in 2009? How will we define success?

The lower end of that conversation sits at 6-6...because six wins would be an improvement. The most level-headed and pessimistic among us may already be bought into a multi-year rebuilding project and have been spending too many long nights with the '08 game film.

Or maybe it's simply a return to a bowl game, which 7-5 would ensure. It would be a tangible improvement over '08, and maybe we have to work our way back up the ladder for a few years.

8-4 sounds like the logical middle ground...which doesn't mean much in August. Eight wins would have to include at least one or two victories over quality SEC competition, some wins to hang our hats on en route to the Music City, Chick-Fil-A or Outback Bowls. Maybe I can't see well from behind my own orange-colored glasses, but I think this is about what the nation at large expects from us.

9-3 means some good things happened, and would almost certainly get the Vols back to January. It would give Kiffin a definitive quality start, something that could be remembered even if the Vols struggled in 2010. If it came with expected losses to Florida and Alabama, it would still mean that the Vols took care of business against the teams they usually take care of business against, which would help in recruiting.

10-2 is what you can talk yourself into once you realize that only Alabama and Florida are definitely better than the Vols...you know, since the Ole Miss game isn't until mid-November, and they'll surely have fallen apart by then, right? There's no one else on our schedule that we can't give a run for their money...so hey, let's just win them all, right? This would be the happiest we've been to see Orlando in quite some time...

And of course...the closer it gets to the season, the easier it becomes to talk yourself into Atlanta, rings...and what ends up being the ultimate reality in my gut in the hours before kickoff: we're Tennessee, we're supposed to win every week, and why should this year be different?

It's August, and practice starts Monday morning...where are we? Are we setting the bar low, comfortable with the idea that even 6-6 would be an improvement? Or are we printing our own t-shirts, ready to sing Rocky Top all night long?

Whatever the answer is, the head coach will have to deal with those expectations. And both Kiffin and Calipari knew that when they signed on the dotted line. Did the last few years of the Fulmer era serve to lower the expectations that helped show him the door? Or have we also been convinced that the new guy is the right guy, and he's the right guy right now...even if he hasn't coached a game yet.