Recruiting Special Edition: The State of the Roster

Share All sharing options for: Recruiting Special Edition: The State of the Roster

Now that the recruiting class is beginning to take form, it's time to take a look at the remaining needs for 2010. Recruiting, at its very core, is a numbers game. You have:

The goal is to maximize the talent pool at each position without creating extreme roster imbalances. (For example, if you have 5 offensive tackles due to graduate at the same time, you're probably going to be screwed when they leave.)

With that in mind, I have created a table that shows the breakdown of the current scholarshiped roster, including what we know of the 2010 class so far. IMPORTANT POINT: I use the terms Senior, Junior, etc. to refer to the number of years of eligibility remaining, so all seniors are in their final year of eligibility, juniors have 2 left, and so on. Redshirting causes the numbers to skew downward, so you'll see a glut of freshmen that exceeds the tally of the 2009 recruiting class. I did this because it's more important to know when you expect to lose players than when you actually gained them.

So, on to the table, and on to one of the more brilliant recruiting maneuvers I've seen. 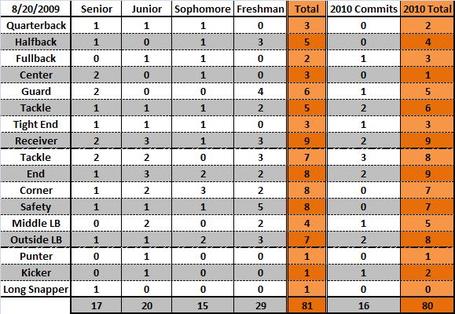 Before discussing the details, I should add that the first orange column shows the state of the roster today. The second one shows what the roster would look like if all seniors were gone and the 2010 class - as it stands today - were here. This way, you can see what remaining needs are left. Oh, and Eric Berry is not subtracted; he's still a junior, so if you want to factor him as an early NFL draftee, subtract one more safety from the numbers. Ok? Ok.

The 2010 class cannot make that number in the far lower right exceed 85. As things currently stand, that caps us for a class of 21, assuming no scholarships are yanked. Things that may change this include: Eric Berry (early departure frees one scholly), the graduation or other departure of a junior (e.g. Cunningham or Lincoln, especially with Palardy coming in), or Sabanizing the roster by unceremoniously pulling scholarships away from upperclassmen. For now, we'll assume a class of 21 or 22.

Obviously, getting a quarterback is the biggest WANT. With only 2 projected to be on the roster in '10 (Stephens and Lamaison), UT absolutely must get one. UT will; there's no doubt about that. So we can pencil one qb in there (possibly two, but certainly one).

After that, the bare minimum for the offense would be a center and another guard. You like to go three-deep along the line and we're not quite there yet; getting those two would make things three-deep everywhere but center, which would still be two-deep.

Finally, the offense needs to be certain of its tight end. I listed Delvin Jones as a tight end because that's the greatest apparent need on the roster that he can fill. If that is indeed what happens, we're alright there.

On defense, we're actually pretty well set. I'd like to see one more safety, assuming Berry leaves, and perhaps a cornerback, but the defense currently has more players projected for scholarships in 2010 (44) than in 2009 (42).

There is a glaring hole for a long snapper, which appears to be an open roster slot after this year. We do have one walk-on long snapper on the roster - sophomore JR Carr; I don't know anything about him and can't really comment much on the position, but I'm not too worried about it. With all of the safety rules in place for long snappers, they've really become specialists like kickers and punters. Find a guy who can handle that one skill and the rest is of lesser importance.

Would you look at that!

Filling out this table - an exercise in unanticipated frustration - proved to be quite valuable, as a real gem of recruiting popped up. Look carefully at the defensive tackle line, first scanning through the current roster numbers. What's the problem? Right now, there are no sophomore (i.e. 3 years of eligibility) defensive tackles on the roster. As it turns out, Orgeron is bringing in 2 JUCO defensive tackles - John Brown and Patrick Harris - who will fill that goose egg in the roster. Once they're here, the defensive tackles will consist of 2 seniors, 2 juniors, 3 sophomores and 1 freshman, and if one of the 2009 freshmen redshirts, you'll see 2-2-2-2 across the board. That is balance, and that is the best thing you can see. They'll have depth and the ideal mix of experience and longevity at the very heart of the defensive line. Magnifico!

Our problem is the interior of the offensive line, where the experience gap is worse than for the quarterbacks. After this year, our most experienced guards will be sophomores. (Any hotshot JUCO guards out there?) We'll also be down to 1 center, unless you believe that Jose Jose will play center - and then we're still only at 2. This is a roster mess that will not be easily fixed and will probably take 3 to 5 years to fully stabilize. Fortunately, it sounds like Cregg is doing a terrific job with the linemen this fall and will have the young pups ready to go in 2010. But that's one of those instabilities I mentioned earlier that you just hate to see - and we have it. Part of that is from redshirting last year and part is from the '09 class, but having 4 of 6 guards lumped together with the same amount of remaining eligibility is not good.

This should make more sense now. The instinct is to want the best players to stick around that extra year (think Peyton). However, having more than Berry leave early should be regarded as great news, if it happens. First, it means that they had a great season this year - something we can be pleased with. Second, it would open up more space for scholarships in the 2010 class - again, something that is a benefit. Lastly, it would build a reputation for Kiffin - that he can get players to The League, and get them there early. That's a long-term, USC-like-dynasty-building good thing. So cheer hard and loud, and hope that enough juniors play lights-out and get NFL offers they can't refuse.