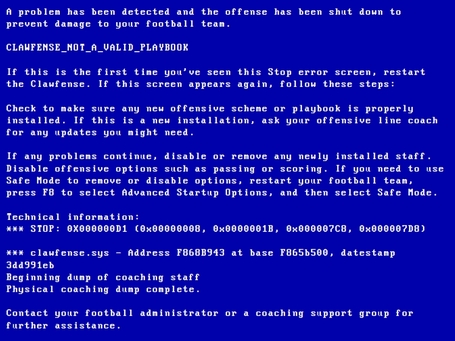 Happy August, 2009, folks. We've hit the reset button on the Tennessee Volunteer football program, and the thing reboots today when the team reports for the beginning of the Lane Kiffin Era. Practice starts tomorrow, and according to the RTT countdown timer over there on the left sidebar, kickoff is a mere 33 days away.

So what are we looking forward to in the Kiffin Chimera's first year? A partial list:

1. Eric Berry. Crunch Berry's only 15 yards from the NCAA record for interception return yards, and he's added 15 pounds of lean muscle mass and with it, the ability to run through brick walls without breaking stride. How long does it take him to break the record? How many ball carriers does he clobber and corkscrew on the way? How much noise can he make in the Heisman race? How many "ER-ic BER-ry" cheers will we hear this year? One, two, and a lot and a lot.

2. Game day crunk. Yes, a little energy and enthusiasm, please, from the coaches, the team, and the crowd. Don't make me bring out the women to show you up:

3. A running game, finally. Let's face it, Tennessee's rushing game has been mostly legendary for years. You know, as in a growing-more-distant memory. Lane Kiffin promises to resurrect it. Yes, we've heard that at the beginning of every new season, but we believe it again this time, don't we? More of this, please:

4. Ed Orgeron and Monte Kiffin Vol Walking and running through the T. Face it, being there during the Vol Walk and when the players run through the T is always special, even when the coaches and players sort of ho-hum their way through it. DACOACHO and Monte dug it during the spring, but what's it going to be like when the Energizers get to do it for real?

5. Freshmen. On the field! Bryce Brown, Nu'Keese Richardson, Janzen Jackson, Darren Myles. Guys who, in the past, we'd have clamored to see for two years until some upperclassmen relinquished their starting gigs due to graduation. Will we actually see these guys play? This season? Early? Could it really happen? Lane Kiffin's said that he devotes a portion of fall practice to finding out which of the new guys can contribute early so that he can actually use them. Can't wait to see that.

6. Wild Boys! I'm betting there will be some shirtless Wild Boys cheers in the student section this year. This could be anywhere between completely embarrassing and totally wicked awesome.

7. Some offensive competence. Last season was bad, bad, bad. Horrible, awful, inept. Just a little bit of being able to move the ball without turning it over near the end zones would do much good for our collective well-being.

8. Being relevant against Florida again. Sure, it won't be because we're a threat to beat them, at least not this year, but thanks to Kiffin, the Tennessee-Florida game will be interesting again.

9. A pass rush. Tennessee was 58th in sacks last year. 79th the year before that and 105th before that. With all of the spring talk about Chris Walker being "unblockable" and with RTT# of 2007 Ben Martin on the other side, these guys could wreak havoc in the back field, each one chasing the opposing QB into the arms of the other every few plays.

10. The newly renovated Neyland Stadium. Yeah, most of the stuff pictured at the other end of that link is for the big money guys, and yeah, it won't look like it's done this season, but still, I can't wait to see the progress we can see.