One point of conversation that has been almost completely looked over in the Tennessee Volunteers / UCLA Bruins game last Saturday was the difficulty that the Tennessee rushing attack had in maintaining success.  The Jonathan Crompton storyline is certainly the more fashionable thing to talk about this week, but to dismiss Tennessee's 2.6 yard-per-rush average as the result of UCLA sticking 10 men in the box and ignoring the pass is a drastic oversimplification of what happened.  In fact, it was not really a function of the number of men in the box at all, but more of the front four on the Bruins defensive line.  And to be really specific, it was a function of the two defensive tackles.

Here we enter the blissful wonder of ESPN 360 and game archives.  I'm going to walk through some of the UT offensive line play on the rushing plays and use the video records as case studies.  (I haven't found it on the SEC website yet.)  The short answer is that UCLA was able to neutralize the center in the zone blocking schemes, mostly due to the play of UCLA's outstanding defensive tackle Brian Price.

On this play, the two defensive tackles are engaged by the right guard and right tackle.  The play was a zone rush to the left, so the offensive line's first step was leftward.  (The defensive tackles stepped first to their left, and were thus met by the right side of the line.)  The center Cody Sullins was free to run out to the second level and block the middle linebacker directly.  Since the tackles stepped away from him, he had absolutely no line blocking responsibility.  Montario Hardesty followed Sullins on the cutback run for a 13 yard gain and a 1st down. 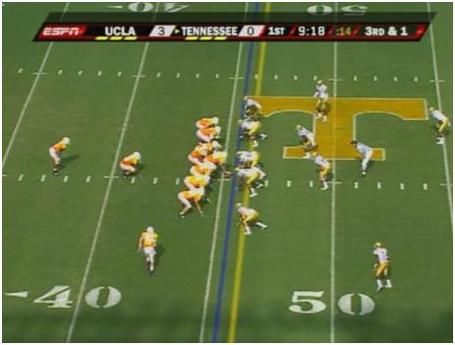 Prior to the snap - note the alignment of the D-tackles to the left of the center. 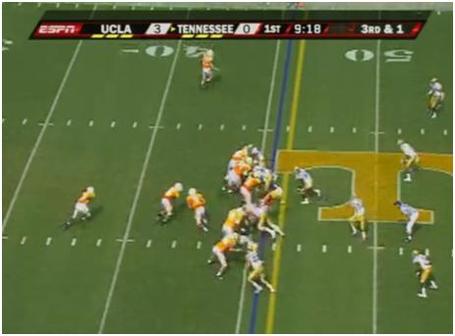 Note that Cody Sullins is untouched at the line and is running toward the linebacker.

What's interesting to note here is that Sullins really didn't do a good job of blocking the linebacker, but he did manage to force him into a spot where the fullback could do the job.  (Hint: it's hard to block on your back.) 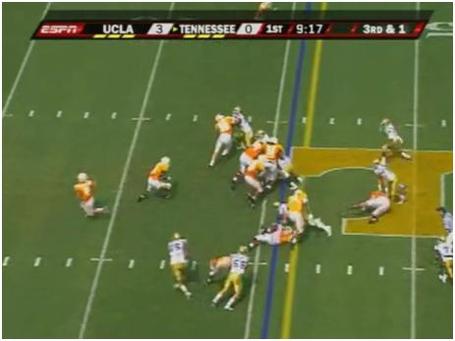 But by now you can see the hole opening up for Hardesty.  The video game cam shows a great picture of the blocking.  Here, note the well-executed cut block by the right guard and note that the center is already out to the middle linebacker by the time Hardesty even gets the ball. 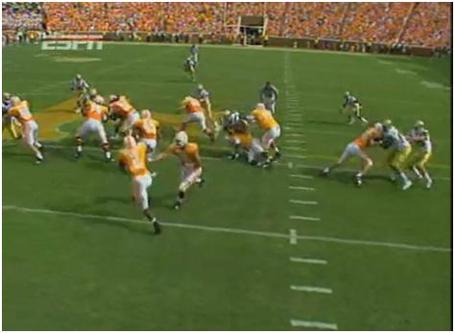 The key here was that the defensive line was unable to counter the position gained by the offensive line's first step.  This was actually fairly common whenever the center had the block-and-release responsibility on the play (that is, whenever SUllins was only the support blocker on linemen and had the responsibility to go to the second level against the linebackers).  Let's now look at a play where Sullins had to take on a tackle direclty.

Here, UCLA places 7 in the box in a fairly vanilla defense.  The defensive line is in a very similar alignment to the above play, but one defensive tackle is assigned to engage the center direclty. 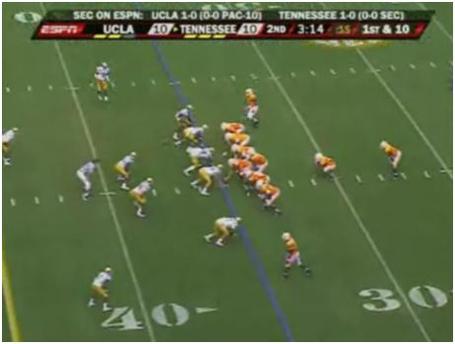 The result is that Sullins gets pushed back into the backfield, inhibiting the cutback play and allowing the linebackers to flow to the hole.  With the wonders of MS Paint: 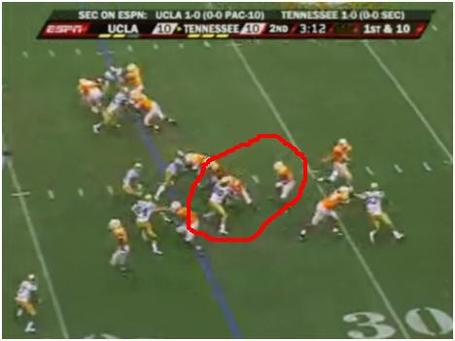 Sullins has been pushed two yards deep into the backfield, taking away much of Hardesty's ability to choose his running lane.  Hardesty now has to travel laterally rather than downfield with his cut, and the extra time gives the defense enough time to adjust and be there.  The play ends in a 2 yard gain for Tennessee, but this is an overall win for UCLA.

As the game progressed, UCLA increasingly assigned the tackle to square up against the center, which was a large part of the reason that the running game ran into some difficulty.  The outside runs were still available, but without a consistent cutback option, the running game was not able to generate the yardage it needed.

It didn't take stacking the box for UCLA to slow down the run, as we have heard all week.  Instead, it was a defensive line adjustment that took advantage of the least experienced player on the offensive line and the tremendous asset of UCLA's defensive tackles.