This is not a post about Jonathan Crompton.  Not about Crompton.  I'm not excusing Crompton, not saying he's ok, not addressing Crompton at all.  He has been well-discussed throughout the week and, even if I did have some reason to try to change anybody's mind, I wouldn't be able to do it.

Instead, let's take a look at some of the passing plays and how the actions of the players on offense not named Jonathan Crompton might have changed the outcome of the UCLA game (ESPN 360 link).  And as it turns out, it's entirely possible that we could be sitting here talking about Crompton's one interception and basking in the closer-than-expected Tennessee Volunteers victory over the UCLA Bruins.  Without changing Crompton.

But instead, changing the actions of some other players.

Not talking about Crompton.

We can skip the first one because that was clearly Crompton's fault and we're looking for non-#8 things here.  So let's look at the second interception. 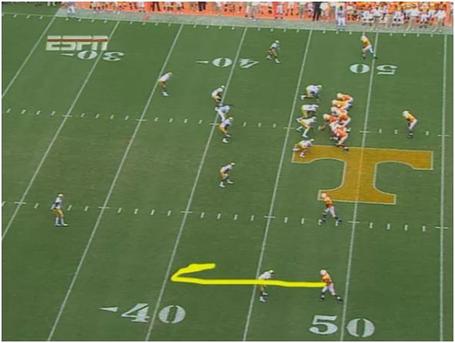 First, we'll use the handy telestrator arrow to highlight what should have happened on this route.  Denarius Moore is the wide out of interest in this play, at the bottom of the screen.  The announcers drew up what they thought the play was supposed to be (and, honestly this really is what the play was likely to be - a hitch route).  Note that Moore was supposed to come back to the quarterback.  (Now you know where this is going.) 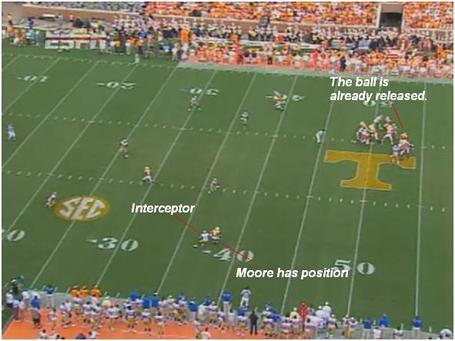 At this point, the ball is already in the air and you can see what Crompton saw when he threw the pass.  Moore had inside position on Alterraun Verner at what would have been a 9-yard gain (assuming no yards after catch).  But then, Moore gives up the advantage: 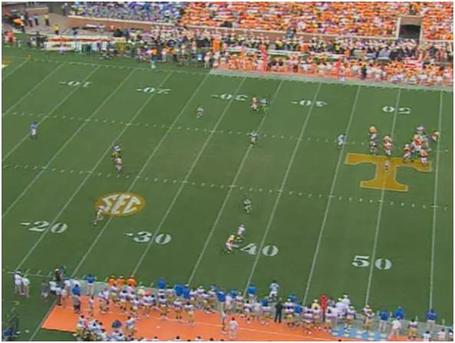 This is the point in time where Verner is making the interception.  If you compare the two pictures, you can see that Moore has drifted about 2-3 yards outward (while the ball was in the air).  The thing is, he knew that Verner was outboard and looking inward and would see the ball in the air (if you watch the play develop, you see Moore force Verner to the outside).  Moore spent the whole play gaining inside position, then gave it up at the last possible moment.

Why?  The answer is:  Moore was looking for the home run.  He drifted outward in anticipation of catching the ball, spinning past Verner, and heading upfield for a long gain.  At this time, only about a minute remains in the half and Moore might have been thinking about the clock.  Or he might have simply been a little greedy.  Either way, he ran before he had the ball and let the defender recover.

Fortunately, UCLA did not score off of this interception.  However, UT would have had a 3rd and about 6 with a minute left.  If they make the first, they're in field goal range.  If not, they punt and force UCLA to kill the clock.  Either way, UT's confidence would have been much higher at hafltime and we would have only had the one interception on our minds.

By the way, I meant to add this in originally.  We have seen this before, where an interception occurs as the receiver fades away from the quarterback rather than returning to him.  --hooper

This is not quite as severe as the second interception, but it is a variation on the same theme.  This time, Luke Stocker is the intended target and he is being trailed by Rahim Moore.  Rahim is covering Stocker man-to-man and starts about 8 yards off the line of scrimmage.  Rather than show the whole field, here's the close up on ESPN's replay camera.  It shows the detail better. 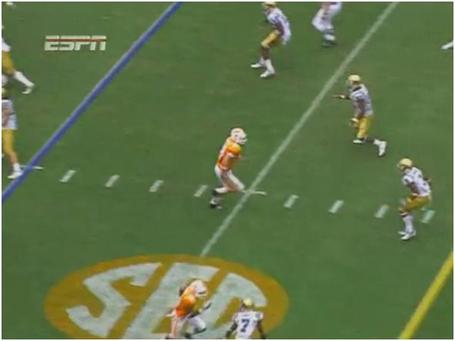 It's worth remembering that this is the first play of the second half, and one they likely reviewed in the locker room.  With two interceptions already, I would guess that they were looking for a safe pass for Crompton to start the second half well.  Here, Luke Stocker is running out and will make his cut right about where Rahim Moore is presently standing.  He's noticing is that (a) Moore is covering him and (b) Moore is watching the play rather than running with him. 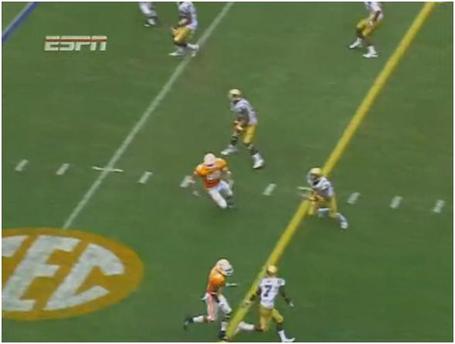 Here, Stocker is making his break.  Moore is still watching the play develop and has a view of both Stocker and Crompton.  Stocker has made his break at the 8 yard line. 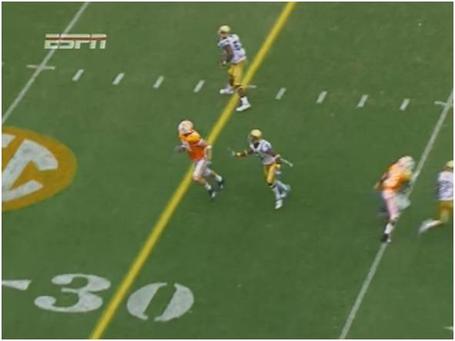 When they talk about making sharp, decisive cuts, this is why.  Notice how Stocker is now 11 yards deep.  He hasn't lost things yet, but he's hurt his position by either (a) announcing his turn early, giving Moore time to adjust, or (b) drifting closer to Moore out of the cut, making it easier for Moore to adjust to the play. 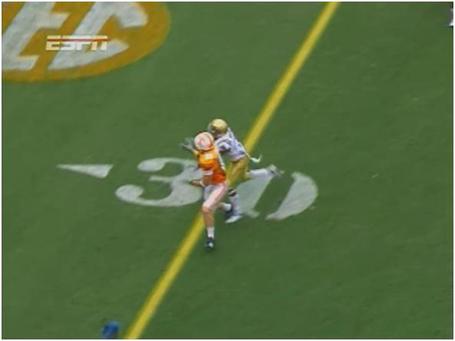 The slow cut and the soft coverage give Moore the flexibility he needs to jump the route.  Moore has been watching the play the entire time, so it's easy for him to time his jump.  And Stocker, whose back is turned to Moore, is helpless to do anything about it.

In this play, Stocker needed to make a sharp, tight cut to keep as much distance as possible and to reduce Moore's reaction time.  Had that happened, this would have likely been an incompletion; Moore was still in position to disrupt the pass, but better route running would have kept him behind Stocker for a longer period of time, forcing him to bat at the ball rather than to step out for it.  It's a really small detail, but it's one that could have been the difference between 2nd and 10 and, well, you know.

On first down, Crompton threw an incompletion that went clear over the head of Brandon Warren.  The play was disrupted by a corner blitz.  The corner started cheating in for the blitz a little early - enough time for the receiver on the right end of the play to try to point it out.  However, the offense simply had nobody on that side of the field to block the blitzer and he pulled Crompton's back leg out from under him just as Crompton was trying to throw.  The torque send the pass skyward and well away from an otherwise open Warren.  So on to second down we go. 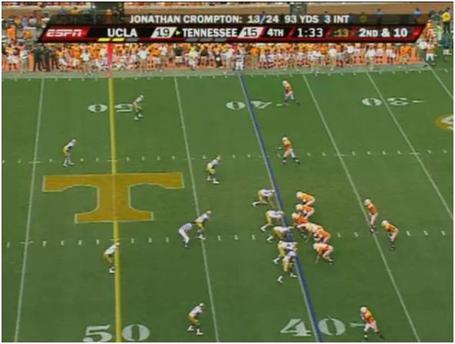 This is the setup of the play for second down.  We don't know who the eventual target is because Crompton never gets a chance to throw.  Note the lines.  The tight end is lined up on the left, as is the running back.  The defense is shifted over to that side, so you have a defender lined up against the tight end, the left tackle, the left guard, the center/right guard, and the right tackle.  The key to this play is the left guard, Cory Sullins.  When you look at the next play, look closely. 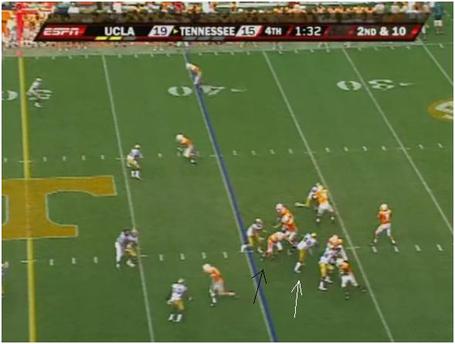 The black arrow shows Cory Sullins, and the white arrow shows his defender.  Sullins is already behind Brian Price by a full two steps by the time Crompton drops back.  How, do you ask, does a tackle get that far past a guard so quickly? 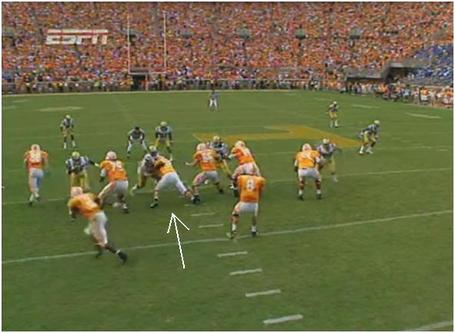 Here's a great lineman lesson for those of us (yes, that includes me) who aren't used to reading line play.  Cory Sullins was obviously very worried about blocking Price on this play - so much so that he lost technique.  His feet are split very wide apart, removing his ability to adjust laterally.  He's also leaning very heavily and no longer has his center of gravity under control.  Lastly, his right leg is fully extended and he has no power left.  All Price had to do was brush him to the side and come on in.  (Which he did.)

Sullins became too worried about Price's strength and was afraid of being driven back, so he committed to lunging straight to where Price was lined up.  The problem was that Price maintained his technique.  Once they contacted, Price still had coiled legs and the ability to maneuver, so he simply shifted to the side and let Cory lean right past him.  With Hardesty running out to be a safety valve for Crompton, there was no safety net for this play.  In that last frame, the play is already over.  There are simply 100,000 people in Neyland Stadium who don't realize it yet.

We obviously don't know how things would have ended had this play not been a disaster, but it's safe to say that the line did Crompton no favors this time around.  (Actually, this play was such a train wreck on the line that Cody Sullins ended up blocking Cory Sullins when Cory spun around to recover.  It's kind of amusing in a very macabre sort of way.)

One last time:  none of this has anything to do with Crompton's responsibilities.  There were, however, plenty of opportunities for other Vols to be heroes on offense, and it's pretty fair to believe Lane Kiffin when he said that the offense as a whole had a bad day on Saturday.