This edition of the blogpoll ballot draft has been delayed for two reasons:  one is that I've been swamped in weekend work, and the other is that I was finally at the point where I could re-investigate the traditional RTT computerized BlogPoll ballot thingamajig that Joel used in previous years.  When he handed me the keys to the ballot, he handed me free reign over numbers.  Mmmm, tasty, tasty numbers.  So I tinkered around with it, but I was never happy with it - at least not enough to actually use - until now.  So we're returning to the computerized ballot for the draft, and I'm ok with listening to overrides for the final.  There's a lot of dialing in left to do, so we'll see how she goes.  But first, here's the ballot.  And remember, this is a 100% resume ballot, and as such, it doesn't care what your team's name is.  Performance metrics are everything, and early-season metrics are wonky (due largely to the lack of good, competitive games and the abundance of cupcake diets).  So yes, there's a lot of movement.

Ok, first the raw data.  Explanations and observations come next.

For a glance at how the scores line up: 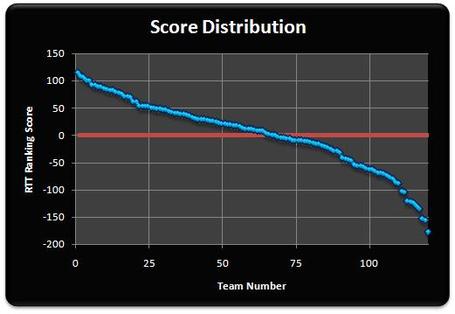 It's heavy at the bottom thanks to some truly horrific receiving ends of the cupcake games.  But the overall distribution is reasonable.  You can see some very slight banding due to the win/loss effect, but it's not overwhelming.  More to come on all of this later in the week.