When I have the time in a week, I plan on using the RTT computer numbers as a starting point for a discussion about the performance of the league in football.  (A recap of the methodology may be found here, albeit with week 3's numbers.  Week 4's numbers may be found here.)  Let's start first by a peek at the conferences in general.  If we score the conferences by a straight-up average of the teams within each conference, we get the following chart.  (Note that "1-A IND" includes only Notre Dame, Army, and Navy, and is therefore a fairly useless number.  But there it is.) 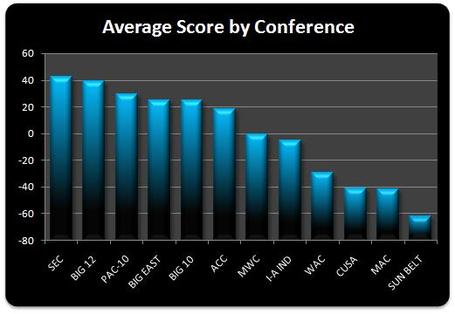 For any weirdness that may result in the scores of individual teams this early in the season, the conference averages make sense to me.  The SEC and Big 12 are the best conferences early on.  The PAC-10 through the ACC are clustered fairly closely together at the moment.  The MWC is still clearly the class of the mid-majors, though noticeably behind the majors so far this year.  The WAC is held above the trash heap almost exclusively by Boise State.  The Sunbelt sets the standard for bad. 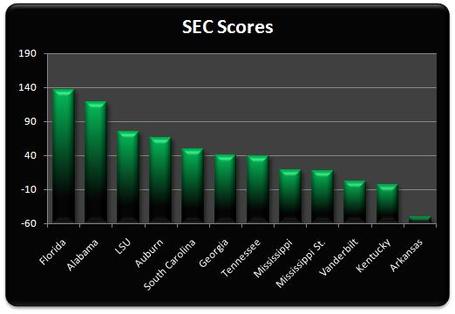 In the SEC, Florida and Alabama are so far ahead of everybody else as to make it laughable.  The one thing to keep in mind about the SEC at this point, however, is the bottom end.  Even though Arkansas trails thanks to a lack of anything resembling a defense, they still score better than -60.  Watch the rest of the leagues to see how important not having sucky teams is to having a good conference. 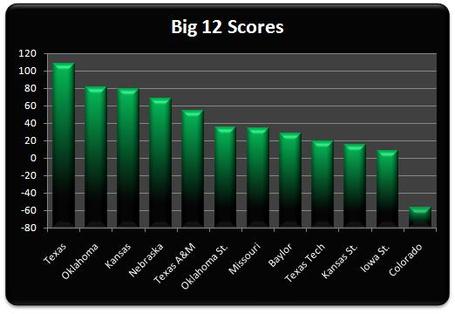 This is very similar to the SEC, except there is only one clear elite in the Big 12 at the moment - Texas.  The difference between one and two elites is literally the only thing breaking the tie between to two best conferences in football.  (Note: Colorado's number is still shaky due to having played only three games.  They play West Virginia next.) 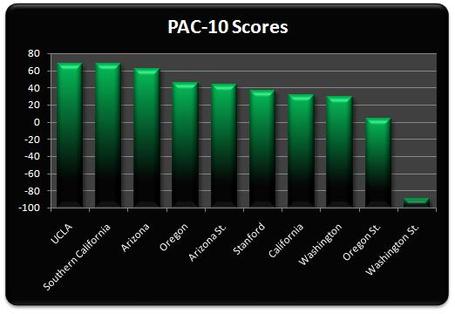 Again with the one anchor.  Other than Wazzou, the PAC-10 has been balanced enough to be respectable across the board.  But you'll notice that there is a tendency for the bottom end of a conference to fall off a steep cliff.  Let's now fast-forward to the ACC, which you may think ought to be higher, given the starts of teams like Miami, Virginia Tech, Georgia Tech, and UNC. 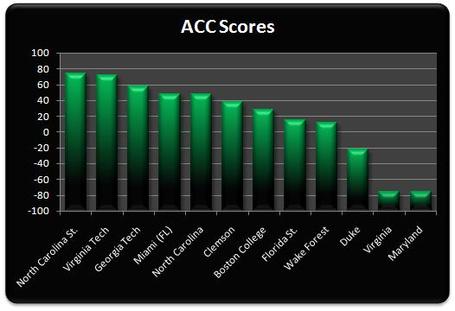 Ah.  Two anchors in Virginia and Maryland, both of whom are nearing Wazzou levels of futility.  Even though the top end of the ACC is actually looking better to the computers than the bottom end, it's the bottom that is making the big difference.  This is true for all conferences except two:  the MAC and the WAC. 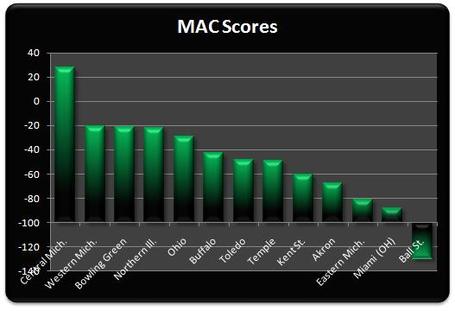 Ball State may be an anchor, but Central Michigan is providing more lift. 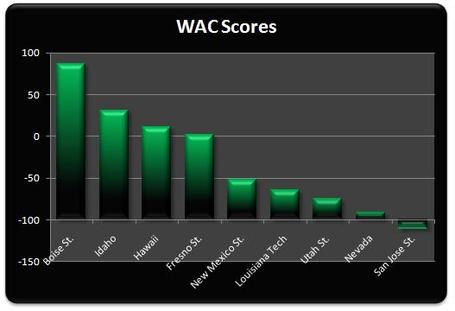 And in the WAC, Boise State unsurprisingly rides above the rest.  By the way, note the scale on the y-axis: Boise is going to get drilled on its SOS later on in the season.  Even undefeated may not be enough for them.

But surely the Sun Belt won't be affected by an anchor, right?  I mean, they're already universally bad:  how low can low possibly get? 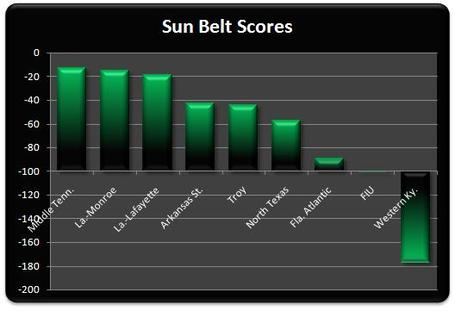 So the point is this:  there's a lot more room for teams to be bad than elite.  A lot more room.  When evaluating conferences, we like to look at the best 2 or 3 teams and go from there, but a true conference measure has to include everybody.  And if 1 bad team in a conference may be ignored an outlier (i.e. Arkansas), it's much harder to justify when you see two or more teams of ill repute (i.e. Virginia and Maryland).

So the next time somebody gets into a conference argument, try this tactic.  Rather than argue about matching best-on-best and so on, simply place the names of the conference teams into hats and randomly draw matchups.  Then discuss the perceived winners and losers.  Odds are it'll be pretty clear that the SEC and PAC-10 are head and shoulders above the rest right now.