Game Review: How Chris Walker and the Volunteers Broke the Ohio Screen

Share All sharing options for: Game Review: How Chris Walker and the Volunteers Broke the Ohio Screen

Outmatched on offense?  Staring at a defensive line that's making Swiss cheese of your offensive line?  Receivers can't get separation?  Quarterback spending too much time counting stars?  One of the most cherished pieces of kryptonite in an offensive coordinator's arsenal is the screen pass.  Rather than continue to fight an unwinnable war in the trenches, why not just let the defensive line through, throw over/around them and send the offensive line out to block the linebackers instead?

Screen passes are one of those 'counter' plays (though not a counter rush, obviously) that is used to turn a defensive strength into a weakness by making aggressive, sack-happy linemen overrun the play.  The offensive line allows a part or all of the defensive line through, usually with only a token check block to sell the fake, then immediately heads downfield to start blocking.  The pass stays behind the line of scrimmage (so that there is no ineligible receiver downfield penalty) to a running back (or tight end and sometimes even a wide receiver in more recent permutations) who is now past the defensive line without having to take the brutal hits and has his offensive line grading the road ahead.  Executed well, the screen can go for a big play.  Timed with a defensive blitz, and a screen pass is often good for huge gains.

If a team uses the screen as a crutch, the defense may reserve a linebacker or lineman to spy the running back and reduce the effectiveness of the play.  But if used sparingly, the defense can't afford to allocate a resource on every play and instead has to rely on quick thinking and adjustment by individual players to recognize the play.

And on Saturday against the Ohio Bobcats, that's exactly what happened when Chris Walker "The Unblockable" fought every instinct to kill the quarterback in the end zone and found himself sauntering into the end zone for six.

Midway through the second quarter, the game was tied at 14 apiece.  Ohio had managed to avoid the critical mistake while the Tennessee Volunteers had allowed a kickoff return for a touchdown, and an early turnover gave a short field for the second Ohio score.  but with half of the second quarter remaining, the Bobcats found themselves facing a 3rd and 29 from their own 9 yard line.  Running for some breathing room was not an option, as the running game had been completely and utterly ineffective.  Converting the first down would most likely require a downfield pass, and this appeared to be the option the Bobcats would take.

The Volunteers were settled into the T-2 defense, with Nick Reveiz lined up 15 yards deep and the outside linebackers playing pass coverage in the middle of the field.  The pass rush was clearly going to be limited to the four linemen.  For Ohio, the quarterback was lined up in shotgun with three receivers spread out: 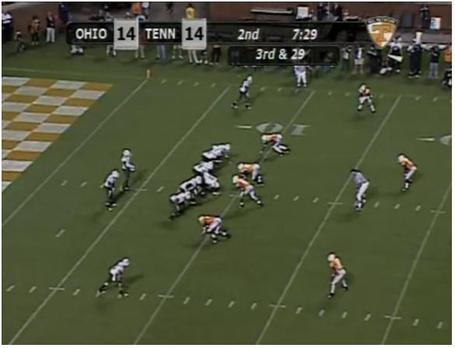 This is a defense conceding that up to 25 yards is ok, but nothing that would either allow for a gutsy fourth down call or get the first outright.  And so Ohio goes to the screen pass - a play that they had virtually never used in the first half.

But Chris Walker is not only The Unblockable, he was The Unfoolable:

I saw the tight end there, so I thought I was going to have to beat the tight end, but I saw him drifting a little bit until the lineman came out so I knew something was up, and, you know, the ball just came right to me so I kinda knew what to do with it.

He read the tight end and left tackle, then switched his play from the rush to cover the running back.  In pictures: 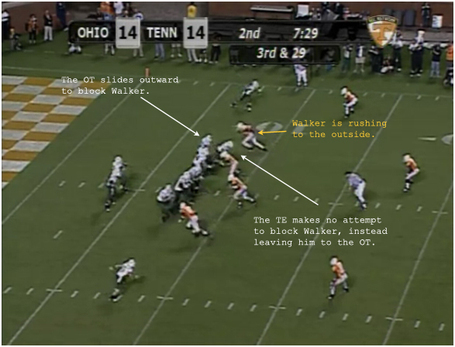 This is the point in time in which Walker becomes aware of the screen pass.  But why?  As the play resumes, the tight end heads out into a pass pattern, which is a perfectly legitimate assignment for the tight end in a 3rd and long.  The offensive tackle, meanwhile, is supposed to block the defensive end. 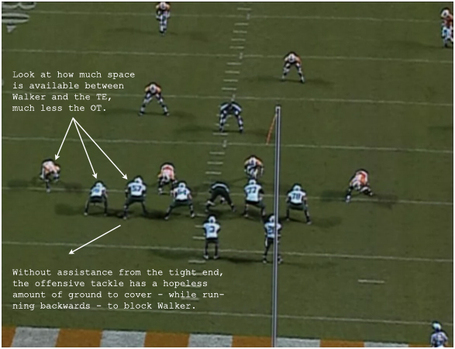 Have I mentioned before how much I love that end zone camera?  From the sideline, you just can't see the perspective.  The fundamental problem with the pass protection scheme is that Walker is left unblocked for far too long.  The outside rush is left wide open; for the OT to cover it, he has to overcommit (remember, he's running backwards) and Walker would have enough time to adjust and rush to the inside.  It's a lost-lose situation for the tackle.  There are only two reasons this can be considered a legitimate strategy: one is that the quarterback will not be holding the ball long enough for Walker to get to him anyhow; the other is that they want to leave Walker free on the rush so he overpursues the play.

From here, the pictures can pretty well speak for themselves. 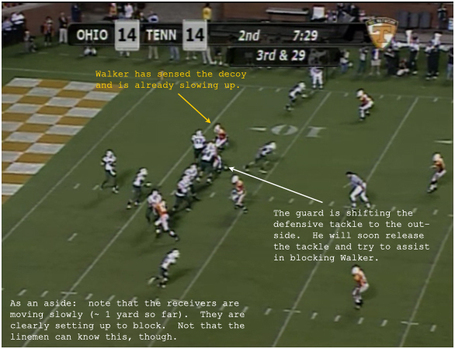 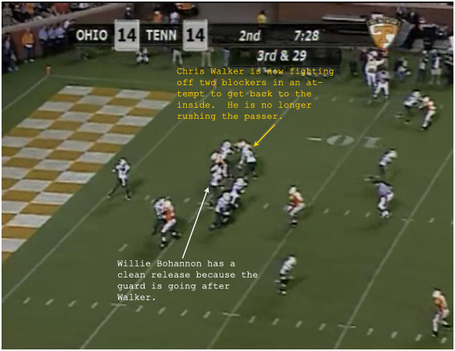 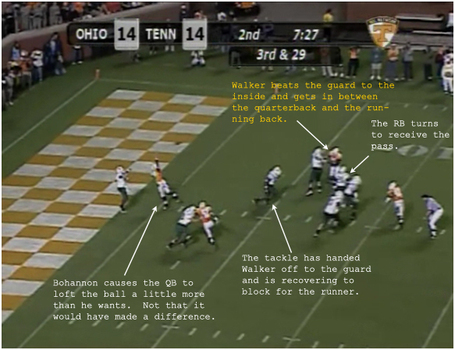 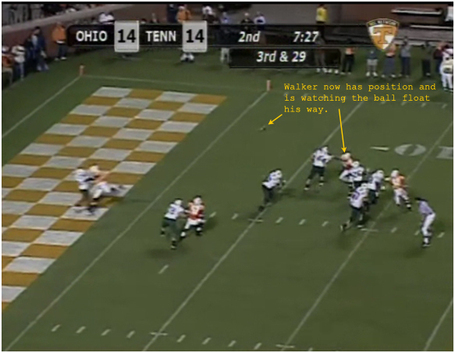 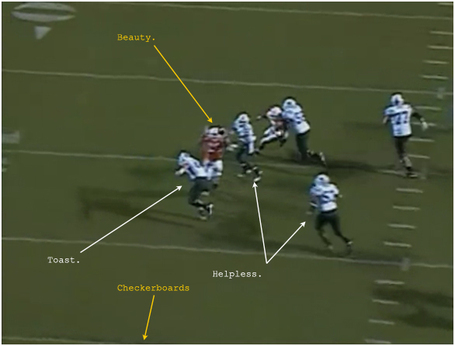 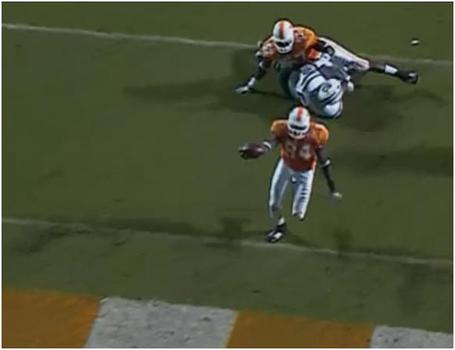 If you go back and observe the timestamps, you'll notice that Walker made his read and decision within about 1 second (even accounting for clock operator lag).  It's a great observation that the team was prepared for the screen and that Walker had the alertness to recover in time.  Coupled with the lack of penalties so far this season, we're seeing a defense that is disciplined both in the rules of the game and the strategy.  In this case, careful planning, good coaching, and a heads-up read by Chris Walker not only stopped the screen, it turned the play into a disaster for Ohio.  This could have been run from the Volunteer 9 and Walker would have most likely scored.

BONUS!  The other way this play was doomed.

Even if Walker hadn't made the read, this play was likely going for a small gain at best.  Look at what else Monte did to defend the screen.  You know that four-man rush?  Try three. 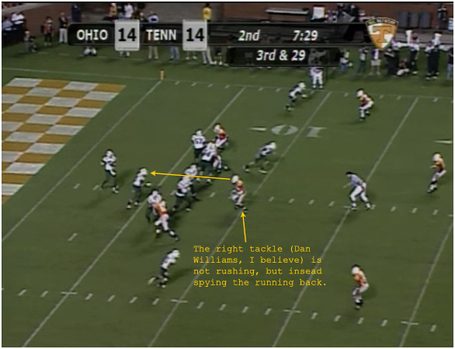 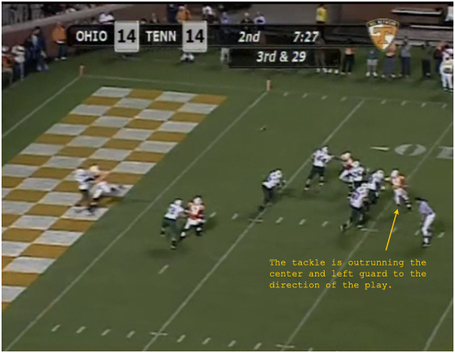 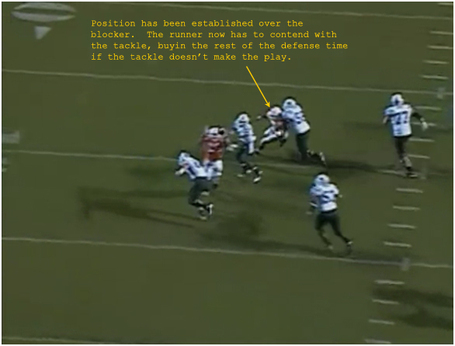 The offensive play call was fundamentally sound - intended to take advantage of Tennessee's powerful pass rush to buy some distance downfield and hopefully punt the Vols deeper back.  The defensive playcall accounted for the possibility, however, and beat the offense both by scheme and by technique.

As a last piece of trivia, I'll leave one final piece of the puzzle up to you.  We've seen what Walker, Bohannon, and Dan Williams did on this play.  Can you figure out what Gerald Williams (the left defensive end) did, and how his heads-up play completed the total domination by the defensive line?  It's easiest to see in the '360 replay, but you can also pick it up in the stills above.