Shout-outs to all the people who are keeping themselves in Orange. I love all of you, and I love this team. That being said, I'm going to try to post what links I can find about this whole debacle. This sucks. I have hated putting it together, which is just a wee bit different than what I felt with the Kansas round-up. Someone should do a case study on us Vols fans, because this is willing torture. I told my girlfriend when I heard about this: why do I care? But we all do, don't we? Hope this helps with some of the links, though most of them are from more primary sources. Fox Sports has become favorited for their front page, though.

FOX: Kiffin Weasels out of Tennessee, Lands in Hollywood.

In the Rocky Top hills of Tennessee, though, it’s a horror flick; a slasher film. A man (perhaps "boy" would be the better word choice) comes riding into town, muddies a long-standing tradition with brash un-Fulmer-like bravado, fields a team of criminals, and then deserts the premises for greener pastures when a better opportunity presents itself.

If Pete Carroll left USC in a state of uncertainty, Lane Kiffin is leaving Tennessee in a state of rubble and shrapnel. And if Carroll’s a "worm" for leaving the Trojans high and dry, Lane Kiffin’s a snake of the highest order. As of Tuesday night, that snake was on a plane to La La Land.

Kiffin Bails on Tennessee to go to Hollywood.

The news that Kiffin is bolting the Volunteer program after just one year is a bombshell, to say the least. It’s obviously devastating for Tennessee, which now has to scramble to find a new head coach and try to keep the 2010 recruiting class from scattering in different directions, a nearly impossible feat. All those millions for Kiffin’s assistants and all those promises of singing Rocky Top until the wee hours weren’t enough to prevent a portion of the staff from packing up the Mayflower and getting out of Dodge. Strange behavior out of the coaching ranks, which is actually becoming a weekly occurrence over the past month.

Bozo the AD -- Mike Garrett is his stage name -- rode one of those tiny tricycles up to the door of USC's hallowed athletic headquarters, paused, cleared his throat and tried to tell a joke.

The punch line came out as, "Lane Kiffin has been hired as the 22nd coach in USC history to replace Pete Carroll ..." We laughed out of shock, frustration and incredulity.

"I think the students have had kind of a violent reaction to that, and a lot of them are disheartened, upset and feel betrayed that less than a year in that he would be leaving and taking off," Knoxville Fire Department spokesman D.J. Corcoran said.

"The Rock," a giant boulder on campus where students often paint Happy Birthday messages, had obscenities directed toward Kiffin. Students tried to enter the room where Kiffin read his statement, holding a sign that read "Go home traitor. It's time," mimicking a campaign the university used to promote Kiffin when he was hired. But the students were turned back before Kiffin talked.

ESPN: Kiffin's Decision a Blessing for the Vols.

The new year started with Tennessee's football team still smarting from its ugly 37-14 loss to Virginia Tech in the Chick-fil-A Bowl.

What a way to turn the calendar.

Finally, there was good news on Rocky Top on Tuesday night: Lane Kiffin is gone.

"Tell them we're going to be Tennessee today, tomorrow, next year, whenever," Walker said. "We're still going to be here no matter who the coach is."

On November 3, 1990, I sat in the upper deck of Neyland Stadium to watch the Tennessee Vols dismantle Temple. Long before, I watched from my living room, sang Rocky Top and bled orange. Since, I’ve been to roughly a hundred football games, soaking up all of the pageantry of Neyland Stadium, the Vol Walk, the Vol Navy and Running through the T. I went to school at Tennessee, covered the team  and basically live and die every time that football is kicked into the air and I hear the words, "IT’S FOOTBALL TIME IN TENNESSEE." I’ve cried for that team and celebrated with that team. I stormed the field and helped tear down the goal posts 11 years ago against Florida, and I stayed till the bitter Rammer Jammer end of last year’s home demolition by the Tide. I’ve spent countless hours writing, reading and caring about everything that has to do with the orange and white. I’ve given a whole lot of my life for my proud alma mater.

And Lane Kiffin just took all that and wiped his butt with it.

AJC: Where does Tennessee go from here?

After 30 years in the business, not a lot surprises me any more. Lane Kiffin’s bolt for USC just three weeks away from National Signing Day surprises me. It also makes me sad. This is not a good night for college football. Some quick thoughts:

Asked what he knew about Brown, Thompson said, "That he's a Tennessee guy like us, and he wants to be here."

"It's up to us, the seniors and other veterans on this team, to help (Brown) keep this thing together for a while," Thompson said. "We need to be out there making sure nobody does anything stupid or gets in trouble or anything like that.

"We're hurt, but we've got to keep our heads. We've got to remember that we have each other. The guys in that locker room, that sometimes feels like all we have -- each other -- but that's enough. We're going to be all right."

GVX: Strange: Kiffin leaves a mess in his wake.

Fred White, wearing his 1998 national championship ring, was standing at the back of the room Tuesday night.

"All those promises,'' White said, shaking his head.

The boom you just heard was the UT football program exploding.

I'm pausing now to think of a worse-case scenario for the Vols.

Later in the evening the crowd became positive, chanting UT fight songs and rallying around the stunned players. Police were present, mostly just to keep fans off the street and on the sidewalks.

Once the players left, however, the crowd turned to Kiffin's pending exit from the sports complex, blocking the one route from the building. That's when the burning started and the Knoxville Fire Department was called to the scene

Or, consider my five favorite thread titles on the Volquest message boards Tuesday night (or, at least the printable ones).

5. Glad I only named my dog Kiffin.

4. Al Davis wasn’t as crazy as we all thought.

3. Pat Summitt is more of a man than Lane Kiffin.

At this point, I don't have anymore. I'm too sick to keep looking. 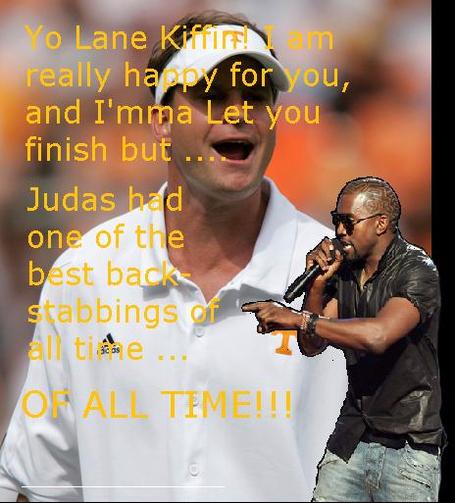 A few months later after witnessing what McNeil said he believed were affronts to the Tennessee tradition that upset him, the player confronted Kiffin. "Coach," he said, "I feel like you're intentionally not embracing UT's traditions."

Kiffin smirked. "Well, whatever Tennessee's been doing isn't working anymore, so we're coming up with something new. Get used to it."

But everything wasn't bad at Tennessee.

For instance, there was Lane's dad, Monte, the team's defensive coordinator.

"Monte was loved by everyone," says McNeil. "He was a great guy, a great football coach, but a better guy."

McNeil pauses for a moment, thinks.

"He and Lane had absolutely nothing in common."

A personal aside to this one from Clay: if the story is true, then I am now officially pissed that I didn't hear about it sooner.