College Football BlogPoll Week 5 Draft: A Crossroads for the Computer

Share All sharing options for: College Football BlogPoll Week 5 Draft: A Crossroads for the Computer

In the discussion that follows, you'll see that I think we have a decision to make about the computer rankings.  They work pretty well, but I think there's a definite chance for refinement on the basis that the game today is a little different from the game a few years ago.  Our weights and statistical categories were decided in part on correlation analysis done by Matt Hinton (then SMQ) a while back, and it may be time to ask whether those correlations are sufficiently valid.

But all that is in the discussion that follows.  Here's the poll, and here's the spreadsheet in Excel '07 version.  (Let me know if you're still having problems with it on your computer.  If so, I might go nuclear on the thing next week in an attempt to fix it.) 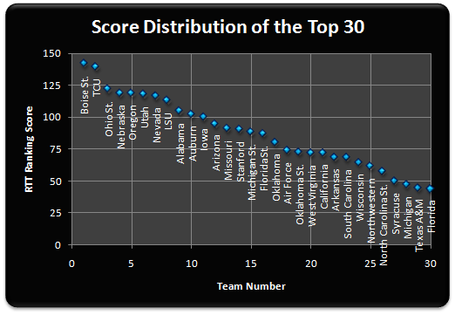 I realize that the natural inclination is to place Oregon at #2, so the computer's strong insistence on TCU is a little odd.  Here's the reason:  again, it comes down to the computer favoring defense over offense.  Oregon is LOADED on offensive cache, but is more susceptible to the run than Utah.  Playing around with the weights, you also find that Utah's offense is not as far behind Oregon's as might be expected, and that it takes quite a bit of overhaul just to get Oregon past TCU.  (For those who tinker with the chart, you have to raise TO to 16.)

I don't mind TCU at #2 for the same reasons I don't mind a lot of permutations at this stage: the variance behind the numbers (and, by extension, the variance in our perception and understanding of the teams) is still great enough that it's prudent to admit that we don't have a lot of certainty.  For example, Oregon anywhere from 1 to 5 is reasonable.  Same for Boise.  It doesn't mean we shouldn't tweak to make an order that most are happy with; it just means we should be careful about treating it as gospel truth.

This also leads to a side discussion for those who are so inclined:  I'm thinking about bumping up the offensive weights.  The categories we chose were based on Doc Saturday's analysis of stat-to-win correlations and placed in order of importance.  The weights were adjusted based on trial-and-error over the last few years.  They're not set in stone.  Here's my thought:  I'm thinking of adding Run Offense (RO) as a category.  As you can see, it's not explicitly listed in the chart, but is embedded within Total Offense.  This will help option and spread running teams in particular, who have learned to live off rushing offense, sometimes at the expense of passing.  Hinton did his analysis before these offenses were as prevalent among major teams, so it's only fair to reconsider this stance.

Along with that, we'll take a look at re-weighting things.  This'll make the latter half of the year messy all over again, but I think it's necessary for one important reason: the tenor of college football offense is different from when Hinton did his analysis, so it's prudent to incorporate that change.  The formal, proper procedure is to redo the correlations and start from scratch, but I think we can fly-by-wire on this one and make it work just as well.  (We'll call it Bayesian just to sound cool in a geeky sort of way.)  Like the polls themselves, however, everything I do is subject to review: let me know if you think this is a good idea or if you have a better one (among things I can do within a week, naturally).

I think they should slip under Nebraska and Oregon at the very least.

Wow.  This surprised even me.  I have no problem with them above LSU because I think Nevada's a better team overall (even though LSU should be, by any measure).  But I wouldn't mind a double-check of opinions here.  Much of Nevada's otherwise unimpressive strength of schedule comes from California, which means that Boise State will be cheering for Cali over Oregon in a hard, hard way.  Given that the Bears have USC/Arizona State/Oregon State/Washington State before Oregon, they could very well win out up to that game - a game that may very well determine whether Oregon or Boise gets a NC game bid.

Let me know what you think.  They're a mess, and LSU/Bama/Auburn can be freely interchanged.  Also, South Carolina and Arkansas are (again) likely too low, thanks in part to having had bye weeks. (They'd be 19 and 20 if they had one more win.)  Because the W/L uses winning percentage, it's always a little screw when comparing, for example, 1-loss teams with a bye vs. 1-loss teams without a bye.

Also, Florida is down at 30.  The thing is, there are a lot of 1-loss teams that deserve their rankings.  Should Florida pass any of them?  I'm not so sure at the moment.  Certainly they should be behind the already-ranked SEC teams, which doesn't give them much space in the top 25.  Honestly, I'm thinking they stay out this week.

They have a horrid SOS.  I'm not suggesting a move - just pointing out something to watch in the future.