We love math-y things here (well, at least I do), and this week's computer rankings come out with a very neat, clean equation as seen in the title.  The computer loves the mid-majors.

Here's the distributable in Excel 2007 form.

As is now the norm, here are the top 30 in graphical form. 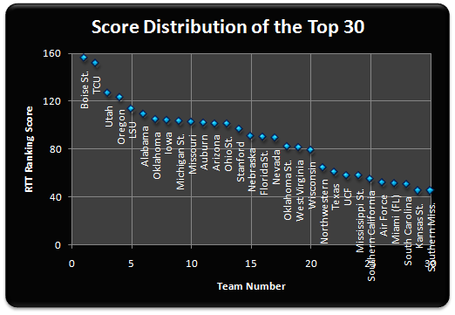 I'm not sure we've ever had a school score as high as TCU in a given week, and Boise St. has TCU beat by nearly 5 full points.  How did that happen?  Both still have average strengths of schedule, according to Sagarin, though both (especially Boise St.) saw their SOS drop incredibly this week.  The good news for Boise is that they're through the worst of their schedule now; every single team they face is clearly better than the NMSU / SJSU tandem that has killed their resume in the eyes of, well, everyone.

Back to the question: both TCU and Boise St. have outstanding defensive metrics.  Granted, they've played some non-starter offenses in the last few weeks, but to be honest, Boise in particular has a very, very stellar defense.  Petersen has basically allowed his first stringers to only play in the first half of games recently, and teams are still getting nothing done against their backups.  These teams have more depth than we like to let on, and it's been showing for those who were willing to tune into the massacres.  It's a different kind of depth than SEC types are used to thinking of; Boise takes players that benefit from a year of development and turn them into a team that's as good as anybody's unit, so their depth is a little rawer, talent-wise, than that in most SEC teams.  The upside is that they tend to have fewer ego problems and are more willing to just learn the system.  I'm not saying it's a better or worse kind of depth - just different.

Utah also gets to the third spot thanks to defense-first football, but their SOS is notably low.

Thank Chavis for this, as their defense kept them undefeated and our computers love defense.  Give me some feedback on them, though.

These teams are all tightly packed together and interchangeable.  LSU is also closer to this group than the ones above them.  Feedback, again.

6-1 and having just beaten OSU off of defense and power running, you'd think the computer would show some love.  The problem is their schedule: Wisky has played UNLV, SJSU, Austin Peay, and Minnesota.  Their middle-ground team (singular) is Arizona State, and they split their Michigan State / Ohio State series.  So you have three dogs and a 2-4 FCS team dragging their schedule through the mud.  Their remaining schedule is much better, but the computer isn't kind to their early cupcakes.  I'm inclined to put Wisconsin ahead of OSU (and both behind Michigan State).

But one spot lower, Northwestern's current resume is even more sugary-loaded.  Bump them down?

No, I'm not inclined to bump them ahead of Nebraska and neither are you.  ;-)

Central  Florida?  Give me some thoughts on them.

Southern Cal will get their customary absence due to their sanctions.  If UCF is also gone, then there will be at least two teams moving in.  Outside the top 30, Virginia Tech is at 31 and Arkansas is at 32 (which I mention because only the top 30 show up in the graphic above).