We have a new leader in the SEC board, and it's Chaos. 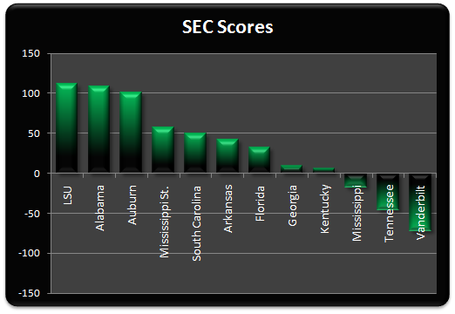 Well, let's just say that the West is stronger than the East this year.  Yeeeeeeeesh.

They are all close enough to move if needed, but here's what the numbers are saying.  LSU, thanks to both being undefeated and having strong defense, are at the top.  Sure, perhaps they shouldn't be undefeated, but we can't hold that against them.  Alabama gets better numbers than Auburn (despite the records) because Auburn's defense is pretty bad against the pass.  They also allow a lot of points.  I'm inclined to bump them ahead of Alabama due to the whole undefeated thing (both here and in the BlogPoll), but let me know your thoughts first.

MSU has really done well, even though we haven't talked about them as much as some other teams.  I don't mind them ahead of South Carolina.

I'm inclined to flip them as well, even though they'll settle things on the field next week.

I'd like to leave them alone as well.  Vandy has quite the claim on last place at the moment.

The BlogPoll draft will come up later this afternoon, as we're waiting on this week's widget.