Last week, our computer was completely infatuated with the mid major teams.  That trend is still so strongly alive that we're wondering if the computer is considering a long-term relationship here.  The three middies are at the top, and still by a large margin.  But after that, some oddities prevail, including a little side action with Ohio State and some serious scorn for Auburn.

Here's the spreadsheet in Excel 2007 form. 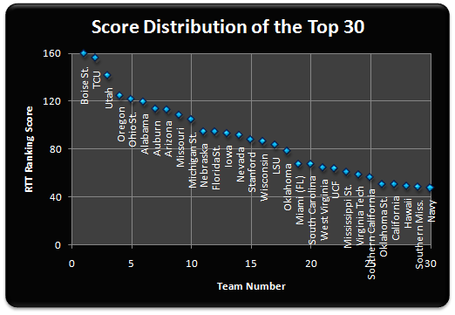 The top 30 in graphical form.

Like last time, the mid majors have ridiculously high defensive metrics, and defense is weighted more heavily in the computer than offense.  The strengths of schedule aren't really all that bad for Boise or TCU, which is why they're so much higher than Utah.  Oregon gets burned in particular on this because they have a merely good defense to go with their great offense.

Other than that, Ohio State and Alabama both jump way up because they have higher defensive metrics than teams like Auburn and Missouri.  This is a function of the strength of the respective defenses and of the strength of the opposing offenses (e.g. the only offenses of consequence that the Tide have faced are South Carolina and Arkansas).  Accounting for opponents is one of the prime reasons we have human adjustments in effect.

I know they're out there, but I'd just feel dirty if I deprived Will of this rightful role in this process, so I'll hold my tongue.

Ditto for the general mess in the middle of the ballot.  I expect a fair amount of suggestion here.

Teams In, Teams Out

The Trojans will again get the obligatory absence in the final draft.  I'm guessing that Oregon will fix this problem next week anyhow, but you never know.  I also feel that Central Florida should be bumped out, based on that whole 'weak schedule plus solid defensive metrics = inflated score' deal.  Other than that, I can make good arguments for all remaining teams.

Candidates of the 26 - 30 range for inclusion are California and Navy.  Cal is incredibly schizophrenic this year, and Navy seems to be past their early season malaise.  Outside that, the best arguments for inclusion in the 31-35 range are TAMU (31), N'Western (33), and Baylor (35), which is to say that I don't anticipate these teams moving up.

So the early read is to bump out UCF and SoCal, and to bring in Cal and Navy.  How does that sound?