SEC Power Poll Draft: Buck Up, We Still Have The Toughest Schedule

Share All sharing options for: SEC Power Poll Draft: Buck Up, We Still Have The Toughest Schedule

And we're still not Vandy. 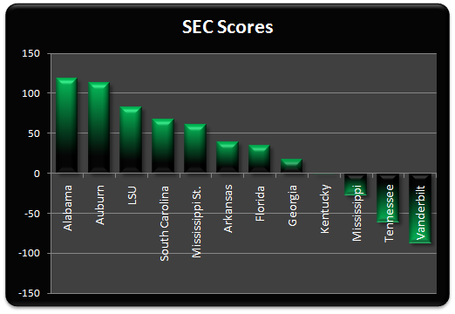 Obviously we're going to flip Alabama and Auburn.  No real need to fly off the handle about that.  The reason the computer got this goofy was because of that defensive favoritism thing, which happened to be enough to overcome the difference in win/loss.  Alabama gained so much with stats like PED and TD that it made up the difference with value to spare.

Have at it.  I don't mind the order, but I can see a few places of disagreement, and I don't mind a few variations either.

Yes, the metrics are horrid for Tennessee.  However, while UT is in the midst of doing everything badly, they aren't worst in the league in much, and much of that last-place TD metric can be seen as the result of playing teams like Oregon and Jekyll Georgia, where Vanderbilt is only recently getting into their toughies.  If our rock-bottom is still better than Vanderbilt, then at least there's that.