Our ballot draft is ready.  For those who may not have seen our system before, here's how it works:  we run various team performance metrics through a computer system that basically works by figuring out how much better or worse a team is from the league average.  This is the draft.  We then open up discussion as to which alterations should be made to the draft before we go final.

Right now, we're down to about 4 or 5 teams with really strong shots and the title game: Alabama, Boise, TCU, Ohio St., and Oregon.  Michigan and Utah would probably be next in line, but the picture is clearing up right on pace with the season.  For all the undefeateds left (18), it doesn't seem that we're headed to postseason apocolypse yet, where there are 4 or 5 undefeateds and a myriad of arguments for the NC bowl.

Here is the spreadsheet in Excel '07 format.  (For those who use '03, there's a problem with the conversion that ends up nuking the the calculations.) 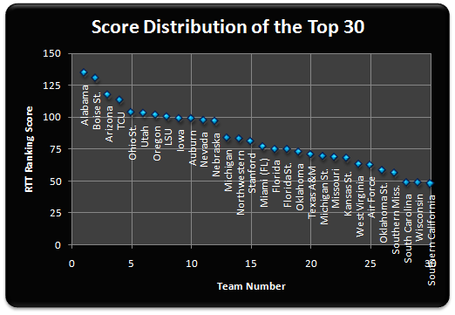 Yes, our computers have this bizarre fetish for Arizona and Oregon seems too low.  Here's the reason:  if you look at the weightings, offense is not as heavily weighted as defense.  Honestly, the difference is pretty dramatic, as run offense (RO) does not even exist and both passing efficiency offense (PEO) and total offense (TO) are of lower weights.  We've talked about this in the past, but over the last several years, this set of weights has worked rather well for us, particularly in the final stages of the season.  Unfortunately, Oregon is so impressive because they're an offense-first team.  Their defensive numbers - especially against the run - are rather pedestrian for a top-5 team.  For those who play with the spreadsheet, let me know if you try changing the weights around and what you come up with.  I believe you'll find very quickly that tweaking the weights to favor Oregon's offense will cause a lot of undesirable changes elsewhere.

My first thought is to simply flop Arizona and Oregon.  What are your thoughts on the matter?

[sigh] I hate to be that grinch who spikes a team that just beat the one I cheer for, but I cannot justify LSU in the top 10, given the way they've been playing.  It's that whole offense thing again, as Chief has the defense right on track.  Looking at the top-30 graphic, you can see that they're effectively tied with a lot of teams, so a bump isn't difficult to justify.

Should they be in the top 15 somewhere?  Their defense is meh, especially their run defense.  Their schedule suggests they're likely to win out now that Texas is in the rear view mirror, but we're not ranking on future speculation anyhow.  Where do they belong as of today?  My gut is somewhere in the Auburn/Nevada range.  Though Nevada would give them a serious run for their money.

I'm pretty comfortable with the top 15 otherwise.  There's an argument for moving Oregon ahead of Boise, and I'm all ears, but Boise has been impressive and has played the tougher schedule to date, according to Sagarin.  That, and Oregon seems to be in the business of yielding a boatload of points to decent teams.  Let me know what you think there.

Utah could slide down but who'd go ahead of them, other than the Arizona/Oregon swap?

Northwestern could be dropped a touch.  They're still undefeated, but Stanford lost a relatively competitive game against a really good Oregon squad.

Yeah, that should be fixed, even if the game was as close as it was.