Ok, you're going to want some overrides on this week.

Here's a handy-dandy chart showing their relative closeness, and the numbers follow after the jump. 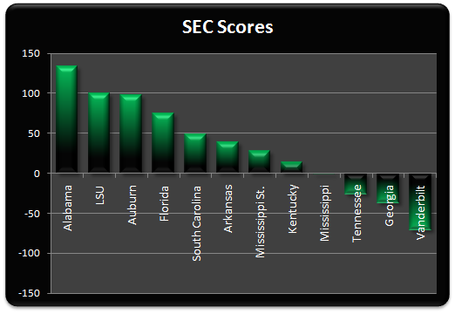 I think the LSU/Auburn swap is pretty evident.  LSU benefits greatly in our computers in that offensive numbers aren't weighted as heavily as defensive numbers.  They have the worst passing game in the SEC, and it isn't really even close.  They still get to face the two best passing defenses in the conference as well:  Alabama and Florida.

The gap between Florida and South Carolina / Arkansas is a bit artificial.  Since the latter have had a bye week, their winning percentage is not as high as Florida's, which makes a small difference.  Florida still has a clear lead in the computers, but that does have to be remembered.