Here are our computer rankings for the week, which serve as our draft for our ballot.  I'll give my thoughts below, and take suggestions for improvement from the crowd.  The spreadsheet is here in Excel 2007 form. 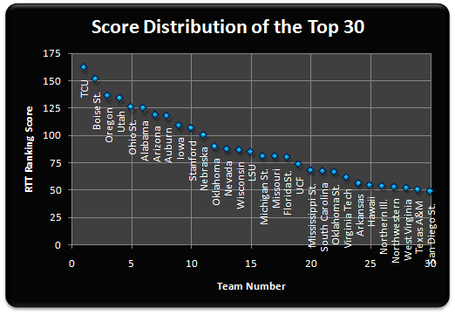 Boise State's lackluster performance allowed TCU to take the top spot this week, as TCU's defensive metrics now exceed those of Boise.  (That, and Boise has a slightly weaker SOS.)  Oregon finally snuck ahead of Utah to break up the mid-major trifecta, though the Utah-TCU winner may likely be at the top next week.

Ohio St., Alabama, and Arizona all edged out Auburn for one reason:  defense.  Auburn's defensive numbers just aren't good.  Granted, they've played some good offenses, but they've also allowed far more yards and points to teams than is comfortable.  Auburn will get the bump above the one-loss teams, naturally, but this is a good indication that Auburn is the most likely undefeated to be upset (outside the inevitable TCU/Utah loser, of course).  Even Oregon's defense is at least above average, which has helped them through a couple of slow starts until their offense kicked in.

A little further down

Iowa again soars higher than their W/L thanks to strong defense metrics.  The question is now: what do you do with Michigan St., Wisconsin, and Iowa?  And where are they relative to Ohio St.?

Florida St. hangs in at 18 thanks to strong defense and what was honestly a game they should have won, had they been able to handle a drop-back pass.  I'm not inclined to bump them out entirely unless there's a good argument for it.

There are few to consider here, but I don't have any particular problem with any of the teams currently in the top 25, either; I don't see more than maybe one or two switches here.  Teams like the N.C. State Wolfpack and the Syracuse Orange are possibilities, but who would be kicked out in favor of them?

A little side note:  between the ACC and Big East, only FSU is ranked.  Since the ACC plays a championship game, there's a very real possibility that an unranked ACC team wins their championship to face an unranked Big East team in a BCS bowl.  I'd be lying if I didn't say I wanted to see this happen.