Drawing from our BlogPoll ballot numbers, here is the draft for the SEC Power Poll. 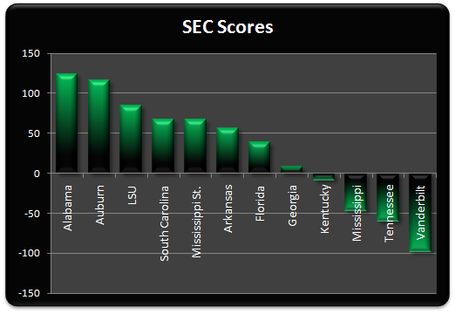 The Alabama/Auburn switch will naturally happen again.  Blame Auburn's defense for making this an issue.  Other than that, I'm pretty comfortable with the order of the teams.  I can see swaps involving South Carolina, Mississippi St., or Arkansas, but those are judgment calls.

All in all, I see a fairly mundane week for our vote.

Looking forward, though, we see two rays of hope for the Vols.  First, Vanderbilt is rapidly assuming last place (or near-last) in almost all of the performance metrics.  So long as the Vols don't give up on the year, that becomes a game that is firmly in our favor.  Second, Ole Miss is having struggles that are placing them on near-UT levels.  In fact, if you ignore W/L, their score ends up worse than Tennessee's.  Additionally, Tennessee's 3DO has actually been sorta ok the last few weeks, moving them from 119th in the nation to 110th.  That doesn't sound like a lot, but you have to realize that the final few teams have been so bad at 3DO that their scores are 2 to 3 standard deviations below the average.  Tennessee has improved their 3DO by a full standard deviation, including the first several weeks of the season.  There are definite trends in Tennessee's favor; perhaps a week against Memphis will help them tie things down and really get on the road to recovery.