LSU - Tennessee Final Sequence: A Chronicle of Events of the Fiasco

Share All sharing options for: LSU - Tennessee Final Sequence: A Chronicle of Events of the Fiasco

Before going any further, note the disclaimer here:

I write this because I'm hearing a lot of misinterpretation of the events, particularly by callers on sports radio.  This is just a repository of some of the actual events of the final sequence, nothing more.

OK?  We good?  [/Cue sarcastic comments from the peanut gallery; I know and love you all.]

To start, here's what I've done: I pulled up the replay on the SEC Network website.  Then I went through, issue-by-issue, and looked for the details.  The issues are in no particular order.   I'll leave the judgements about coulda-shoulda-woulda to you.

Here's a snapshot before the helmet is removed.  Note the time on the clock. 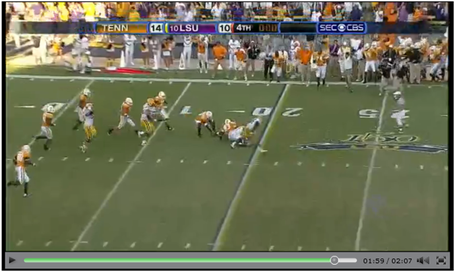 The center is the leftmost LSU player on the screen.  You can see him reaching up to his helmet and that the clock has already expired.  His helmet doesn't come off for another second or two, which is clearly after he could reasonably believe the game to have ended.

Note also that Tennessee players and coaches are already coming out on the field.

The Umpire Standing Over The Ball

Keep this issue separate from Tennessee's actual substitution.  Tennessee screwed up, no matter what the umpire did.  Instead, consider this from the standpoint of time on the clock, not opportunity for Tennessee.

This'll take a few pictures to go through properly.  First, let's look at the point where LSU starts substituting.  On all these, keep track of time on the clock. 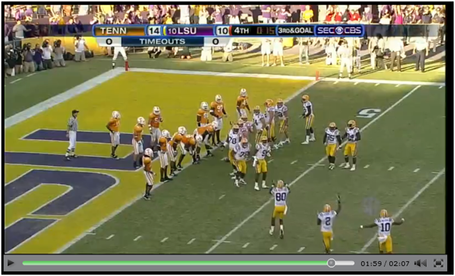 15 seconds.  Note the position of the umpire.  Ok, now let's look at the point where the umpire starts running to the ball.  We have to extrapolate a little bit because the production crew changes to a camera view of the Tennessee sideline. 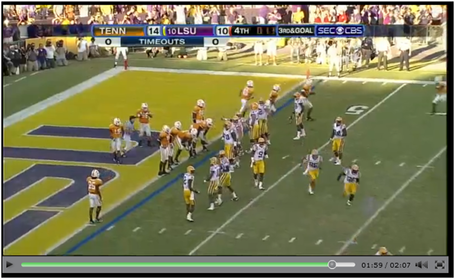 The time is 11 seconds.  The actual point of recognition of the substitution occurred at  the switch from 12 to 11 seconds on the clock.  The umpire moved to the ball in response to Tennessee substitution, not in response to LSU.  That's the proper response; had UT not substituted, he would have had no reason to move.  (Reminder: the TV clock is an approximation of the game clock.  We don't know the EXACT game clock time, but we do have an idea of the time delta, which is what's important here.)

Ok, now let's see when he gets to the ball. 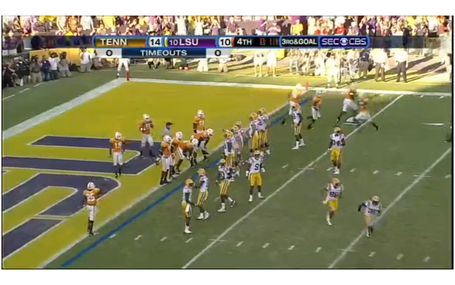 This is the closest we see the official to the ball before the camera view switches.  There are 10 seconds on the clock.  Now, let's see the moment when the camera view returns. 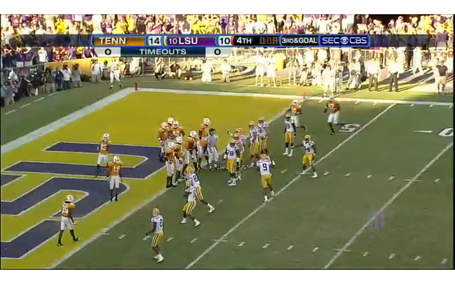 8 seconds.  The difficulty with still photos is the lack of motion.  Here's one second later. 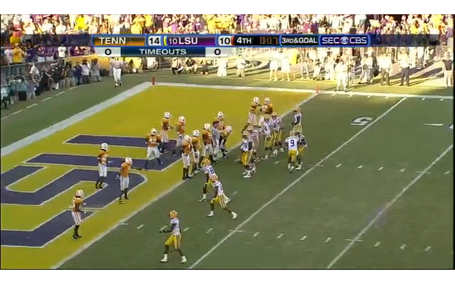 You can see the umpire off the ball.  If you watcht the video at the link above, you'd notice that he was already walking backward.  My best interpretation: he was watching the UT substitution and moving away as soon as the players were basically on the field.

At best, he was two seconds 'over the ball'.  Was that enough time for Tennessee?  If not, how much would have been?  Again, this is no excuse for the substitution infraction.  But a more relevant question would be whether UT had a fair chance to get the players on the field and get set for the play.

Was LSU set prior to the snap?

Yee-ha.  Here we go.  Here, I zoom in a bit to help get the details.  The resolution is the best that the SEC Network video offers. 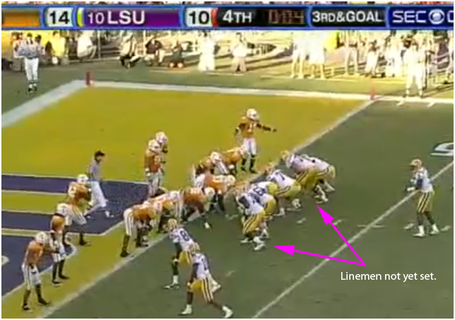 Four seconds on the clock and at least the tackles are not yet set.  An argument can be made for the left guard as well, but that's moot.  Now let's look at the moment of the snap. 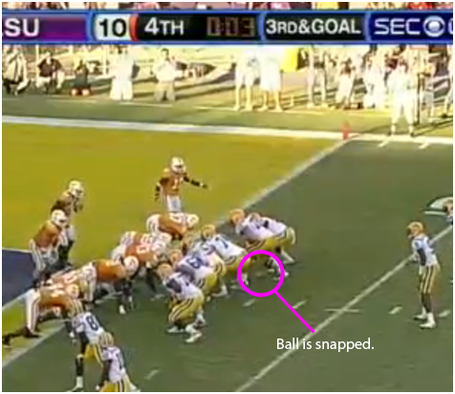 Were the Tigers set for a full second before the snap?  I'm not going to go frame-by-frame and calculate that; you'll have to go to the video and make up your own mind.  Keep in mind: the one-second rule for players being set, Rule 7, Section 1.4.a, is within the context of a post-huddle or post-shift formation. It's a little cloudier in this context than you'd expect, especially since part (b) of the rule emphasizes that the rule is to be interpreted by spirit, not letter, of the law.

Either way, note that there are three seconds on the clock.  Let's play a hypothetical: had a false start been called on the Tigers.  A false start is a dead ball foul while illegal participation is a live-ball foul, so only the false start would be called.  If this were the NFL, the penalty would include a 10-second clock rundown which would end the game.  However, after searching the rulebook for quite a while, I cannot find an equivalent in the NCAA rulebook.  In that case, I have to assume that the call would be a 5-yard penalty with the clock starting on the referee's signal.  Three seconds is enough time to get the snap off, so a final play would have happened from the 6, and we have no way of knowing how it would have turned out.

That's a lot.  Make of it what you will, but I think we can all at least appreciate that a lot happened in the span of 8 seconds, perhaps more than the officials could effectively manage.  Everybody was in fiascoville on this one.

This is for completeness and needs no pictures.  By rule, LSU's incoming players had to step between the hash marks to be legally substituted.  They met this requirement; there is no concern of illegal substitution by LSU.  I know that nobody's discussing this one, but LSU was actually fortunate on this point.  Reuben Randle met this requirement only because the ball was on the far side of the field from the LSU sideline.  He barely crossed the hash only because he was signalling to the rest of the offense and he was clearly focused on getting in position, not on the hash mark.

But it was a legal substitution, period.  No foul there.

It's fair to ask why Tennessee bothered to substitute at all.  Keep in mind that LSU did in fact have enough time to make the substitution and snap the ball; even if the actual play had been a false start due to a premature snap, the three seconds was enough for a legal snap, especially if the umpire did not have to stand over the ball for a Tennessee substitution.

So, had UT not substituted, LSU could obviously run a play after substitution.  After the substitution, LSU had a 3-WR set on the field - clearly a pass play.  Meanwhile, Tennessee had a goal line defense with two defensive backs on the field (Janzen Jackson and Art Evans).  There were 4 linebackers (Austin Johnson, Nick Reveiz, LaMarcus Thompson, and Savion Frazier).  There were 5 linemen (Chris Walker, Montori Hughes, Corey Miller, Malik Jackson, and Jacques Smith).  Ask yourself: even with Jordan Jefferson on the field, do you really want to face a 3-WR set with that lineup on the field?  Perhaps especially with Jefferson as QB and a 3-WR set, you'd want faster personnel.  If that's not convincing enough, consider that the eligible receivers were Russell Shepard, Reuben Randle, Terrance Toliver, and Deangelo Peterson.  Try to draw up an effective coverage scheme with UT's unsubstituted personnel; now try to draw that up in the span of about 8 seconds since I highly doubt that such a coverage scheme had been practiced during the week.

Substituting was clearly the right option in this case.