Route Combinations and Packages Keep Bray Ahead of the Game

Share All sharing options for: Route Combinations and Packages Keep Bray Ahead of the Game

The quasi-surprise emergence of Tyler Bray as a legitimate passing threat has been a welcome boon to this season. It's not that Simms was bad - but the future was never about Simms. It's about Bray, and last week gave birth to all kinds of excitement about the future. Bray's touch was impeccable before he decided to channel his inner Grossman and started ramping up the degree of difficulty. (I'm surprised he didn't attempt a five-step drop like hopscotch at some point, but he probably didn't want to make life any more difficult on the offensive line, so kudos to him for that.) Touch like that doesn't go away easily, and it doesn't go away naturally.

With that being said: what if it's not Bray? What if it's how the passing game is designed and we just have a really good crop of WRs? In order to understand just how much domination Bray unleashed against an overmatched (and awful; can't forget awful) Memphis squad, it requires looking at how the passing game sets up. It's pretty easy to decimate Memphis, though.

Knowing what the pre-snap alignment is useful, but it has its limits; if there's a pass play that can't take advantage of either type of coverage than it's not an ideal play. That's why the whole idea of packaged concepts exists.

Again, the idea here is simple. Basically, what we're looking to do is put together some kind of pass package that is effective in some form against both types of safety coverage. This can be done with design and coaching: 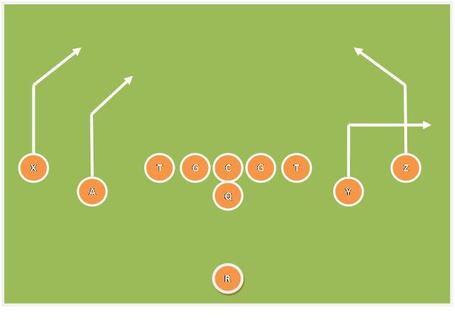 This is pretty simple as these things go. Both combinations are effective in their own right, but they may not be effective against certain types of coverage. This play is part in design and part in coaching (as all plays are); which combination the QB goes to depends on the coverage. Let's think about this for a minute; if the defense is in a 2-high look there's going to be a gap in the middle of the field. The double slants on the right side of the formation should challenge the safety on that side of the field; he can't possibly cover both guys and the QB should look to make a read either high-to-low or low-to-high* depending on what the coaching points are. Similarly, if the defense is in a 1-high look the route combination on the left side of the formation is effective. The QB's read will progress in the same way.

Simplify It: Divide and Conquer

The implied portion of this process is the idea of splitting the field; the QB will work either to the right or the left, but he will not work both. That makes for simpler reads and a much shorter decision process. If that sounds like something that would be a good idea with a true freshman QB and an offensive line held together with bailing wire and duct tape, then you're on the right track.

It's actually simpler than that; the QB is typically only reading one particular defender. He can do this thanks to an "overload" concept against zone (that is, putting two guys in one area and throwing it where the receiver doesn't go). The smash route is a great example of this: 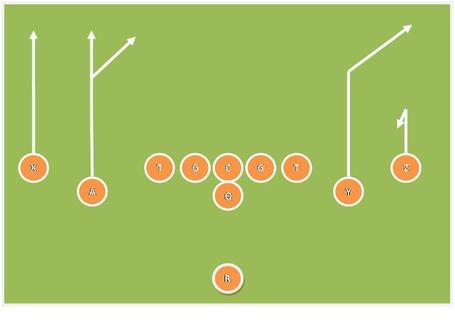 The route combination on the right side of the diagram is the "smash" route; in reality, it's actually two guys running two different routes (inside receiver runs a 12-yard corner, outside runs a 6-yard flat), but the net effect is the cornerback can't guess correctly. If he shades backward correctly, then it's free yards on the inside.

As for that multiple-arrow route by the slot receiver, let's talk about that a bit too.

Only as good as your receivers

First off, teams need receivers that are able to get off the line, handle leverage, and be able to find holes in zones. That's all pretty standard stuff, but it's worth stating - aimless receivers who can't catch anything thrown their way make things near-impossible for a QB. Fortunately, Tennessee doesn't have those kind of guys.

Smart receivers allow coaches to do things like set up split routes. The A receiver is running one of those - he'll either run vertical or a post depending on the positioning of of the safety.

We'll expand more on this lately, but it's good to know that we're finally at the point where the playbook can be used to its fullest. Denarius Moore and Gerald Jones only have a few more games in orange; Bray can get them there.

As usual, tons of credit to Smart Football here, as the images are mostly adapted from his stuff.

Lean more about the divide and smash route.

Additional information on basics on passing and combinations.

Really, just go here and burn a few hours. It'll be good for you.