Livin' on a Brayer

Share All sharing options for: Livin' on a Brayer

With two wins in November, we just need two more to reach the coveted 6-win threshold for extra practices in December.  Up next are, as you already know, the Vanderbilt Commodores and Kentucky Wildcats.  While the team can't afford to get lax about this, we fans have the liberty to assume we'll most likely beat Vanderbilt and have at least a reasonable chance against Kentucky.  (The Wildcats have a bye week to prepare for the Vols, but we'll have one more game to get Bray some live-fire experience.  Injuries will be our biggest concern, by far.)

The last two games have been everything a Vol fan could ask for.  Tennessee rolled up 50 points on two opponents and made sure the game wasn't in doubt in the closing quarter.  Perhaps more importantly, the team just seemed to be having fun on the field - something that's not often been there over the last few years.

So while we drink up the Dool-Aid, let's also take a look back at the Mississippi Rebels game for a bit and look at how the offense performed.  With 441 yards of offense and zero turnovers, it seems like there just wasn't much to worry about.  However, the way those yards were earned could give a little bit of pause.  For all the fireworks, there is certainly more room for immediate improvement on offense, and that's what I'd like to focus on.

Don't worry, it's not doom and gloom in the middle of your parade; this is just a peek at how things can get even better.  And how they can be better in time for Vanderbilt and Kentucky.

[ED: Massive edit in this section, explained below.]

This was dictated by Ole Miss's defense: with two very talented tackles on the D-line and a very porous secondary, the obvious answer was to pass early and pass often.  That is exactly what Tennessee did, as you know.  Here is a graphic I haven't used in a long time, but is useful; this shows the percentage of passing plays that Tennessee ran as the game progressed. 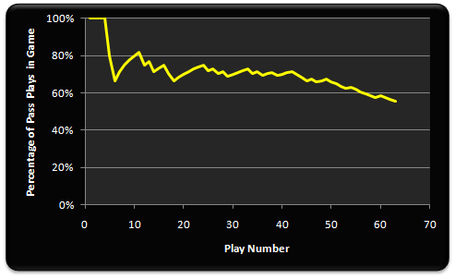 [ED:  I had the wrong data grabbed on the original chart.  It's fixed now, but it changes the conclusions a bit so I just rewrote the analysis.  Apologies.]

The big swings in the early phases are just the effect of having a small number of plays, so don't read too much into that.  Throughout most of the game, we were running a 3:1 pass/run ratio.  We didn't really come off that ratio until late in the second half when the game was out of reach; at that point, we unleashed the Poole cannon and beat the clock into submission.  (Well, we would have killed clock if Poole hadn't decided that scoring on multiple 30+ runs would be fun.  We'll have to console ourselves with his 100-yard, 2 TD performance.)

This is about as pass-heavy of a game plan as you'll ever see.  Now, it's no secret that Chaney loves to build up a passing attack.  He terrorized the WAC in the 90s when at Wyoming, then took his air show to Purdue and produced Brees and Orton with it.  At some point, though, we'll have to hope for a more consistent running game to go with it.  Even if passing beats Vanderbilt and Kentucky, we'll have a bowl game to look forward to.  It won't exactly be the Sugar Bowl, but give an opponent a few weeks to prepare and the risk of interceptions does increase.  A little defensive honesty would go a long way.

Moving forward, we'll face significantly worse run defenses.  Ole Miss is 46th national in run defense, but Vanderbilt is 101st and Kentucky is 88th.  Against the Rebels, our running game only really worked once they were tired of chasing our receivers and the game was out of hand.  At that point, their motivation had waned and holes opened up for a very pent-up Poole.

As much as we love the fireworks show, I think we'd be well served to have more running success early on in the next two games.  This also keeps the defense off the field and rested, which is valuable when you consider our depth.  It's also important once you see exactly what kind of offensive success we had.  Let's look at ...

Here's a chart of the number of plays on each drive.  There's an asterisk here, as the numbers do not include plays nullified by penalty (by either team).  That's because the plays don't count in official stats and, with only 6 penalties on each team, it doesn't affect the conclusions. 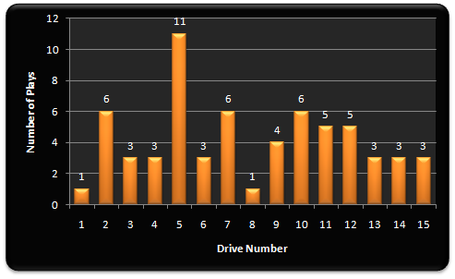 Yes, UT had a lot of drives.  Drive #8 was the kneel down before the end of the first half, so you can ignore that.  But otherwise, Tennessee lived off of short drives.  Credit the long-range passing game for much of that, but there was a lot of boom-or-bust to Tennessee's offense on the day.  Of the 15 drives, eight ended in Cunningham punts.  This is coupled with our play selection to a degree; not only did we go pass-heavy, the successful passes tended to cause very early scoring.

Again, this was dictated by the opponent's weakness, but extending drive length will be important - especially against Vanderbilt.  We're really, really thin on depth, and Kentucky has a bye week ahead of our game.  You know they'll be keen on ending the streak.  We have to have all hands available for that game, and it starts with smart resource management against Vandy.

That is not to say that we should risk the Vandy game to keep the defense rested.  By all means, get the points and get 'em early.  But as soon as the game is well in hand, let's try to hold the ball for some play clock, ok?

If we divide the plays up by number of yards gained, you'll immediately see that Tennessee either hit it big or didn't go anywhere. 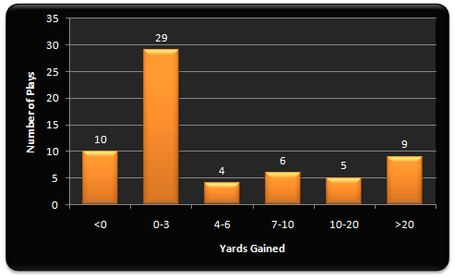 This is the absence of the running game showing up.  With rushing, those intermediate plays increase in frequency while the short gains / no gains / losses diminish.  This is where Tennessee needs to improve on offense for two reasons:  first, teams will eventually sell out against the deep ball if Tennessee doesn't get more balanced; second, Tennessee can dictate the action more by extending drives and cutting down the opportunities for bad things to happen on defense.

And again, this isn't criticism by any means.  Tennessee ran a beautiful game plan against Mississippi.  These are simply observations on how things can get better.  And once the intermediate game gets going, I think we'll really get treated to some fireworks.