Purdue Revisited: Chaney and Bray, Once More With Feeling

Share All sharing options for: Purdue Revisited: Chaney and Bray, Once More With Feeling

So I don't know how to say this, but I'm excited. Yeah, everyone's excited now because we have a quarterback of the present and future and it happens to be the same guy. Big deal. I'm excited for that, sure, but that's not why I'm really excited. That's not why I rewatched Ole Miss-Tennessee three times this week (thank you, CBS College Sports, for only running four games on endless repeat during the week), although the carnage was fun on replay. I'm not above that.

So if I'm not excited about the future, what am I excited about? The past. This offense is Jim Chaney's, more than last year ever was - and that means we're seeing things we haven't seen here. We're seeing stuff that looks a lot like the Purdue teams from a decade past. Obviously, that invokes memories of Joe TIller and Drew Brees raining down fire on an overmatched Big Ten at the turn of the century - and those comparisons aren't totally without merit. Chaney was one of the first purveyors of the spread at the major-conference level, but he didn't remain stagnant after changing the way the game was played. (Purdue isn't exactly lighting it up these days, and hasn't been prolific in a while. Why? Everyone's caught up to them.) If I had to choose an innovator for my team to use, I'd want one of the originals. Chaney's as close as we get, and that's fine - with him, we're about to get more explosive on offense.

This isn't quite the "spread" as we think of it, even if there are similar characteristics. Granted, at this point spread has about 18,000 different connotations, but I'm referring to the classic pass-first spread with an emphasis on short passing. However, we're not seeing as much true short passing; while they're certainly there, Bray's been keying on the deep man in his progressions.

Here, take a look at this - you saw it last week. This was the first TD. 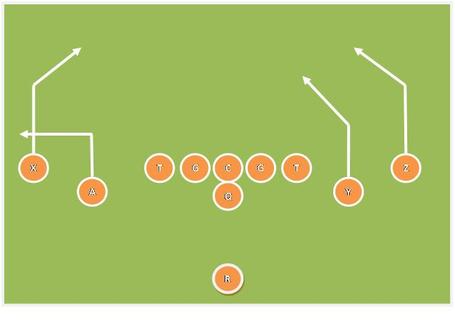 Sure, this is eerily similar to one of the graphics I had last week, but there's a reason for that; this play has a zone side and a man side. (Granted, Bray's pass wasn't the desired target - Ole Miss had a LB spy, which means he should've looked at the X/A combo on the right, but let's not split hairs.) These type of plays were common since the thought process was so simple for Bray.

He's been doing that stuff for years.

Double-slants were really common last week, but that's okay. Again, they're a great route package against man. I'd prefer not to see only the guys on the left side of the formation run double slants (re-watch the second quarter - this happened at least 3 times over the game, if not more. And those were the ones I identified offhand), but again, I'm picking nits.

One other key play Tennessee broke out a couple of times is called levels. It looks a little bit like this: 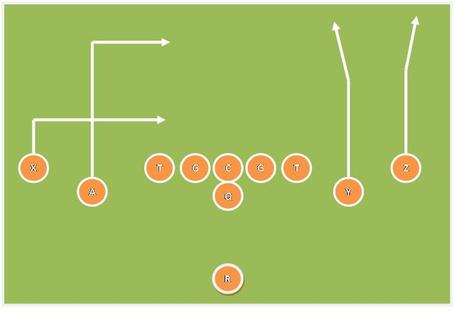 This is another one of those plays that's strong against man and zone. With this, Bray's key is the corner / LB on the A receiver; if the defender drops to defend the deeper route, X coming across the middle should be wide open for a five-yard gain - it's basically free yardage. Similarly, if the defender plays short then A should be open, since the vertical routes on the other side of the formation are dragging the safeties deeper.

On a related note, we've discussed the smash route again, but let's see it one more time: 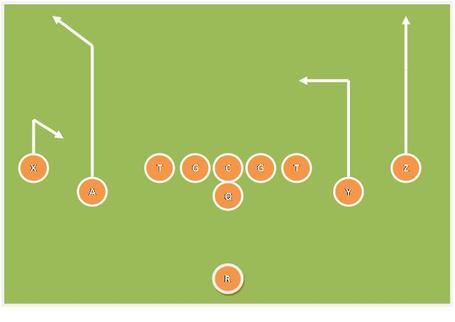 Now, let's add the smash and level together: 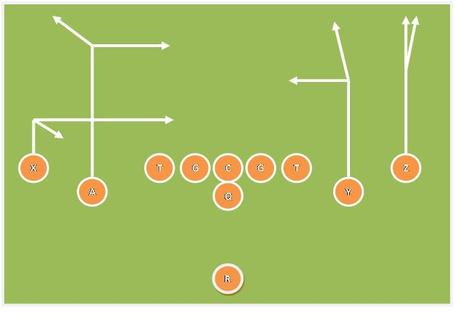 This is powerful - the combination on the route is a classic method of hiding what your actual routes are until the break. That destroys pattern reading (in essence, predictive pass defense) because until the receivers break into their true route, the play looks exactly alike. (And ignore what happens with the receiver on the far right; this is why I'm not an offensive coordinator.)

It helps that these of plays are not only easy for Bray, but they put our best playmakers in positions to be successful. Bray doesn't have to key on twelve different things and make a play in order to be successful; I understand why he's trying to make the big play (in short, he can and it's fun), but it's not necessary. Denarius Moore and Gerald Jones are good enough and reliable enough that simply delivering the ball in a position where yards after the catch are possible is going to be good enough with them. Destroying pattern reading lets Jones, Moore, and - yes - Justin Hunter get enough separation to be dangerous.

Bray's doing a pretty good job of letting the receivers do their own thing; if anything, he's trying to do too good a job with that, as his touch has been spotty. Instead of trying to simply get the ball to his receivers - who, it should be noted, were usually pretty open against Ole Miss - Bray's been opting for the perfect pass. That's commendable, in a way, and once his touch improves we'll be glad he has that need. But for now, simplicity is okay; Moore and Jones are obviously good enough, and Justin Hunter is finally coming into his own. And if you think Vanderbilt's going to change that, I'm not sure what to tell you at this point.

Once again, we'll give some love to Smart Football for his work on levels and progression reads.

Here, let's add a video because that won't get everyone's hopes up, will it?