The SEC ballot continues to be more tranquil than the BlogPoll ballot.  The only real issue is that whole Alabama / LSU hangup:  LSU actually lost a bit of ground to Alabama in our computers despite beating mighty Mississippi.  The override cometh, but you know... 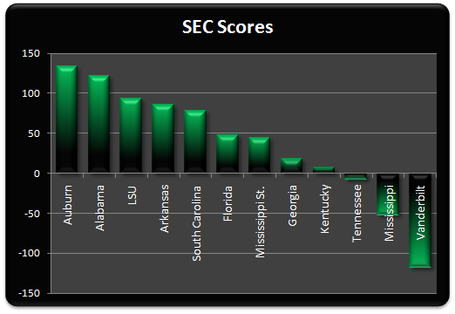 Well, at least Vandy has the toughest SoS in the conference.  That almost makes the rest of their train wreck easier to handle.  Conversely, Kentucky's SoS is weakest by a considerable margin, so factor that into your predictions this week.

Tennessee continues their improvement, though not by such great strides this week.  A win over Kentucky would almost certainly give the Vols a positive score for the year, which is a considerable feat after October.

Oh, and LSU has the best total defense in the league.  Les Miles owes a certain defensive coordinator a lot more money than he's already getting paid.