Randal(l) Cobb Isn't Even Supposed To Be Here Today

Share All sharing options for: Randal(l) Cobb Isn't Even Supposed To Be Here Today

Before I forget - Happy Thanksgiving, y'all. It's been a blast to do this series.

This Kentucky team concerns me, not because I can entertain the possibility of the Wildcats winning this game (after all, it hasn't happened in a quarter century) but because Kentucky's offense concerns me. Sure, it's not Oregon we're-going-to-eat-it-and-let's-just-hope-it's-not-too-painful level of concern, but it's an issue. I'm not concerned about the passing attack - Mike Hartline is good, sure (he's the best passing QB we've seen all season), but schematically we're in a decent position. Justin Wilcox is coming from a conference where these types of attacks are similar. It only goes so far, though.

Simply put, we haven't seen a player who operates like Randall Cobb. Well, strictly speaking we haven't seen a guy like him in Knoxville in four years, but the time for self-flagellation has passed (unless you're based out of Gainesville). Sure, Cobb is a dangerous receiver - which may be an understatement - but one receiver isn't enough for these things. At least, not a simple receiver deployed in normal ways.

Apologies to color commentators: I'm about to blow your mind.

Let's start off with the insanely obvious: just because the quarterback doesn't receive the snap doesn't automatically make it a Wildcat package. Hear that, hacky third-tier color commentators of the football world? Live it. Know it.

This particular flavor of Wildcat has traces back to Gus Malzahn, who brought the basic ideas back from decades ago The college version came from Arkansas (thanks to David Lee, Malzahn, and - yes, really - Houston Nutt). So what does make a formation definitely Wildcat? It's simple, really - you need a QB, typically in shotgun, typically who's not a QB - and a RB/WR cutting across the formation in something that looks like a jet sweep. Basically, it'll look like this right before the snap: 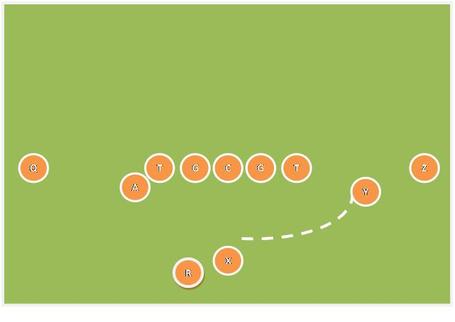 That pre-snap motion is critical. Without it, there's not much to this formation other than as a cute gimmick every once in a while. The defense has to respect the pre-snap sweep motion or it'll wreck them. (As an aside, Tennessee ran this play a couple of times in the Ole Miss game with Da'Rick Rogers in the sweep, although I'm not sure if it was an option since Bray handed off to Rogers both times.) The sweep is dangerous, sure - any time someone can pick up a handoff right after the snap at full speed that's going to be an issue to defend. But the threat isn't the sweep: 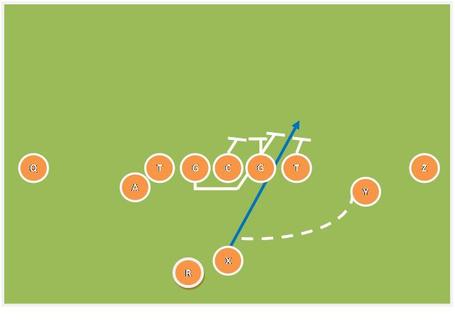 The lines look a little weird (really, it's been all season and I still haven't figured out how to show a pulling guard), but if that looks familiar it should. This is a power play out of a vastly different look, although this particular choice is run to the weak side of the formation. It's easy enough to run it to the strong side, too, but I tend to think the weakside power gets another advantage since an undisciplined front seven will shade the sweep.

Granted, the idea of seeing power from a different formation isn't new; we saw that Oregon would routinely run power opposite from a typical play. This is the same basic idea; the defense gets stressed because the slot receiver is running across the formation, so the defense instinctively wants to shift over a bit to be in better position to deal with the sweep - and end up horribly out of position to defend the power.

Not only can Cobb function in either the snap receiver or sweep role in this formation (putting Derrick Locke or others at the other position), Cobb was originally a quarterback. (Granted, he was largely ineffective as only a QB, which prompted his movement out to WR.) With most typical Wildcat "quarterbacks", the passing threat really isn't a threat except for in theory. With Cobb, the passing threat is legitimate; obviously, Cobb isn't the most accurate or has a cannon of an arm, but this changeup has teeth. Expect to see this once or twice.

No pictures, though, since we've seen a ton of pass plays over the course of the season. Don't automatically assume any Cobb pass will be a deep threat, though; if anything it's more effective on the goal line. The secondary will likely freeze during the pre-snap mesh, which puts them out of position. At, say, your opponent's 10 that's as good as a free six if you have a guy to get them the ball. Cobb's not a great passer, but he's good enough to take care of those passes.

Commitment to the rush

My typical issue with the theory of putting wildcat playmakers in is how coaches talk about how they're designing packages around players and they want to get their playmakers in space more, and it turns out "more" is code for "twice". Joker Phillips, on the other hand, doesn't mince words. Cobb has had over 12 touches in four of the last six Wildcat games (one of which was an unneeded massacre of Charleston Southern), which means he's been effective in aggregate as well as per touch. That's part of the reason Cobb has been as dangerous as he's been.

If it sounds like most of the Tennessee game plan should be centered around stopping Cobb, then that's correct. Derrick Locke is shifty and Chris Matthews / Mike Hartline are a capable enough WR / QB combination, but there hasn't been a player that can singularly change the game like Cobb.

Long story short, since I could easily drop another 1,500 words on it: in soccer, there's a method of defense that involves constantly defending the same guy. (Hence, the concept of 'marking" - you "mark" that guy. Follow him around.) That wouldn't be the worst idea to deal with Cobb.

It's not without dangers, though (and this is also why I'm not paid to be a defensive coordinator); for example, any time Cobb cuts across the formation there needs to be some way of switching off. This is, in essence, an expanded version of pattern matching. Pattern matching is functionally a zone-man hybrid method of pass defense; in this case, we can apply it to run defense. Basically, one guy always "keys" on Cobb whenever he's within range to be a potential runner. If he goes out of range, he needs to communicate this to his appropriate adjacent defender. Communication is the key here.

Will that stop Cobb? No, but if it slows him down then the Kentucky offense will go down with him. That sounds like it'd be fun.

Here, watch David Lee explain the Wildcat. (For whatever reason, the embedding isn't working on this post, so we'll try it this way.)